MADRID.- The Museo del Prado presents the exhibition Chardin, a comprehensive survey of the work of Jean Siméon Chardin (1699-1779). Chardin is one of the leading names in 18th-century French painting but has never been the subject of an exhibition in Spain, which only houses three of his paintings, all in the Museo Thyssen. After being shown at the Palazzo dei Diamante in Ferrara, the exhibition is presented in Madrid thanks to the sponsorship of Fundación AXA. It comprises 57 paintings by this great master of the still life and of genre painting, including some works not shown in the version of the exhibition seen in Italy. The exhibition is on view from March 1 to May 28, 2011.

Since the exhibitions on Chardin organized in conjunction with the bicentenary of his death and the tercentenary of his birth, in 1979 and 1999 respectively, there have been no further revisions of the relatively small oeuvre (around 200 works) of this admired and highly original artist. Featuring 57 paintings, the present exhibition offers a rare opportunity to appreciate Chardin’s work and is the first on the artist to be held in Spain. Jean Siméon Chardin (1699-1779), The Young School Mistress (1735-1736?). Oil on canvas, 61,6 x 66,7 cm. Londres, National Gallery.
The exhibition is structured chronologically, covering the most important phases of the artist’s career from his beginnings in the second decade of the 18th century to his late pastels of the 1770s. Visitors will encounter some of Chardin’s most celebrated paintings, shown alongside other, little known canvases loaned from private collections, and some recently identified compositions. In addition, the version to be shown in the Prado includes 16 works not exhibited in Italy. They include The Ray, one of Chardin’s most important paintings, loaned from the Musée du Louvre; The Attributes of the Arts, from the Musée Ruiz de Alarcón, Madrid. España Jacquemart-André in Paris, which is a large-format composition on an allegorical theme that has never previously been loaned to an exhibition; and the three versions of The young School Teacher (National Gallery, London, National Gallery of Art, Washington, and National Gallery of Ireland, Dublin), now shown together for the first time in Madrid.

The exhibition opens with still lifes from the second half of the 1720s, including the celebrated painting the Ray, on loan from the Louvre. It was Chardin’s entry piece into the Royal Academy of Painting and Sculpture in Paris but the artist was only admitted in the lesser category of “Painter of animals and fruit”. At this point he broadened his areas of interest and introduced the motif of live animals in his paintings, as can be seen in the two canvases from the Museo Thyssen on display in this section: Cat with a Piece of Salmon and Cat with a Rayfish. Jean Siméon Chardin (1699-1779),  Basket of wild strawberries (c. 1760). Oil on canvas, 38 x 46 cm. Private collection.
The next section opens with still lifes from the 1730s, including a green-necked Duck hanging on the Wall and a bitter Orange, and Still Life with a Porcelain Vessel and two Herrings suspended by pieces of Straw from a Nail in front of a Niche. Shown next, and also from this decade, are three examples from the celebrated Soap Bubbles series. Chardin worked in a variety of genres, never completely abandoning one in order to take up another and was continually inventive within all of them. He would also frequently return to earlier themes and simultaneously work on different paintings at the same time. In the 1730s, and influenced by 17th-century Dutch painting, the artist turned his attention to genre scenes. Chardin masterfully conveyed the meditative mood of his figures and the serene dignity of simple domestic tasks, while his stylistic evolution is clearly evident in these works. His brushstroke becomes more vaporous and the soft tonality heralds the pastels of his final years. In addition, he abandoned his use of models from the humbler social classes to focus on the bourgeois circle of his second wife. It was works such as The young School Teacher, seen here in three versions that have been brought together for the first time, Boy with a Top, and Girl with a Shuttlecock, that would bring Chardin true popularity in the second half of the 19th century.

The exhibition then turns to works from the 1750s and 1760s and to the artist’s return to the still life, a genre that he had almost completely abandoned. These compositions are clearly different to the works of the 1720s due to the presence of a greater variety and number of types of game, species of fruit and objects (costly pieces of porcelain and sophisticated glass ware). Among works from this period in the exhibition are the delightful Basket of wild Strawberries, Glass of Water and Coffee Pot, and bouquet of Carnations, Tuberoses and Sweet Peas in a white porcelain Vase with a blue Pattern, the latter a masterpiece loaned by the National Gallery of Scotland. Works such of this type reveal a more agile, smoother type of brushstroke and also demonstrate the artist’s interest in painting reflections, transparent effects, light and shadow.

The exhibition ends with two pastel portraits, the medium to which Chardin turned after he was obliged to abandon oil painting due to failing health and which provoked great surprise at the 1771 Salon. These pastels reveal Chardin’s confidence in his own powers and mark the end of his artistic career. The generous collaboration of a remarkable number of leading American and European institutions - particularly the Musée du Louvre, which has lent 11 works – as well as that of private collectors has made it possible to realize the challenging aim of bringing together some of Chardin’s most celebrated paintings for the present exhibition. A unique painter
“I make use of colours but I paint with sentiment”, Chardin himself said of his way of painting. The result was works that are very different to those of the other French painters of the 18th century such as Watteau, Boucher, Fragonard or David. The artist described how he focused on the objects in his still lifes: “I have to forget everything that I have seen and even the way that others have depicted these motifs.”

In the words of the exhibition’s curator, Pierre Rosenberg, Honorary Director of the Louvre and the leading expert on Chardin: “If I had to define his still lifes in a single word, that word would be ‘silence’”. And indeed it is this palpable silence in Chardin’s still lifes that differentiate them from the work of most of the other leading painters in that genre, which had traditionally been considered a minor one and whose recognition in the 18th century favoured the development of Chardin’s highly distinctive style.

Chardin enjoyed success in his own lifetime, while later artists such as Cézanne, Matisse, Picasso, Morandi and Lucien Freud considered him their master. 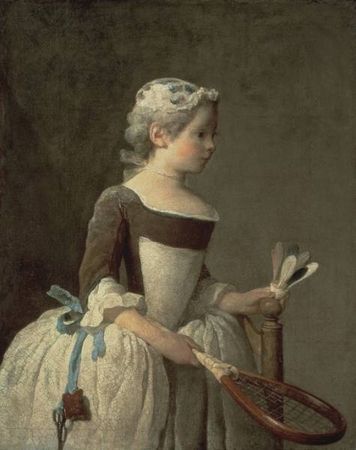