The catalogue’s front and back covers feature superb 1930s photographs by Man Ray, including a Photomontage with Nude and Studio Light (est. $100/150,000),* a rare Surrealist image that was included in the artist’s definitive early monograph Photographs by Man Ray 1920 Paris 1934; and a Solarized Male Torso (est. $70/100,000, above right), unusual in the photographer’s oeuvre. Jaromír Funke, the great Czech Modernist, is represented by a dynamic abstract Composition from his Abstraktní Foto series of the 1920s (est. $50/70,000). Brassai’s Le Corset Noir (est. $20/30,000), one of the few extant prints of this sexually-charged image, captures another side of between-the-wars Paris. August Sander’s Handlanger (Hod-Carrier), printed by his son Gunther, likely in the 1950s (est. $30/50,000), is one of the key images from his Antlitz der Zeit series. 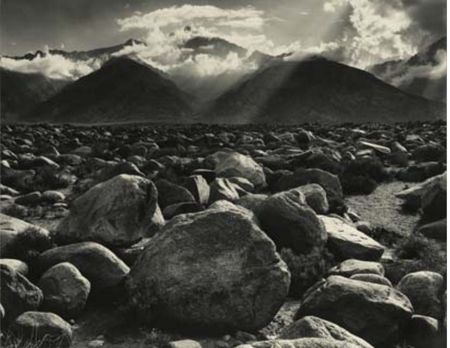 Edward Weston is represented by a number of impressive landscapes, especially a fine example of his Dunes, Oceano (the ‘White Dunes’) (est. $70/100,000), originally from the collection of Tennessee attorney Homer A. Jones, Jr., who acquired it directly from the photographer. The print of one of Walker Evans’s pivotal American Photographs images, the Negro Barbershop Interior (est. $50/70,000), belonged originally to the influential curator and photographer Van Deren Coke. Aaron Siskind’s Kentucky (est. $25/35,000), from 1951, is mounted on Masonite and bears the label of the Charles Egan Gallery, New York, where Siskind’s earliest commercial gallery shows were held. Among the Harry Callahans is his 1940s Torn Sign (est. $20/30,000), mounted on the photographer’s preferred early board, manufactured by Brudno. One of the most significant daguerreotypes to be offered by Sotheby’s in recent years is a full-plate daguerreotype of John C. Calhoun (1782-1850) (est. $30/50,000), whose lengthy career included the offices of United States Vice President, Senator, Representative, and cabinet member. The basis for the Calhoun oil portrait now owned by the U. S. Senate, the daguerreotype is perhaps the best-known image of this fierce defender of states’ rights, and was only recently rediscovered. Another daguerreotype well-known to historians of photography is an anonymous 6th-plate of a Mother with Sleeping Infant (est. $7/10,000) that was owned by Beaumont Newhall and reproduced by him in the many editions of his pioneering 1961 volume The Daguerreotype in America. Other works in the sale from the Estate of Beaumont and Nancy Newhall are ones by Timothy O’Sullivan, Frederick Evans, Ansel Adams, Henri Cartier-Bresson, and Helen Levitt, all of whose work was championed by the Newhalls. Photographs by the modern masters of glamour photography begin with a large, vivid dye-transfer print of Tom Kelley’s Marilyn Monroe on Red Velvet, Pose #1 (est. $10/20,000), the famous 1950s calendar image that jump-started Monroe’s career. The sale features a very special association copy of Richard Avedon’s seminal Avedon/Paris portfolio (est. $150/250,000), inscribed to his good friend Carol Matthau, the actress, author, and wife of Walter Matthau who described her friendship with Dick Avedon as “one of the best parts of my life.” Irving Penn is represented by works that show his command of a range of photographic processes, including a silver print of the iconic Cuzco Children (est. $60/80,000), a vibrant dye-transfer of the Still Life with Watermelon (est. $30/50,000), and rich platinum-palladiums of the Nubile Young Beauty of Diamare (est. $30/50,000), Nude 58 (est. $30/50,000), and Cigarette #69 (est. $25/35,000). Three powerful, mural-sized, multi-media works by Peter Beard, each unique, as well as a variety of smaller works, are included in the sale’s Contemporary offerings. The popular Maureen and a Night Feeder at Hog Ranch (est. $120/180,000) is extensively embellished with colorful illustrations by African artists; and Francis Bacon in his Studio (est. $80/ 120,000) and Crab Diary Page, November 1984 (est. $30/50,000) are each combined with a plethora of collage elements for which the artist is renowned. *Estimates do not include buyers premium