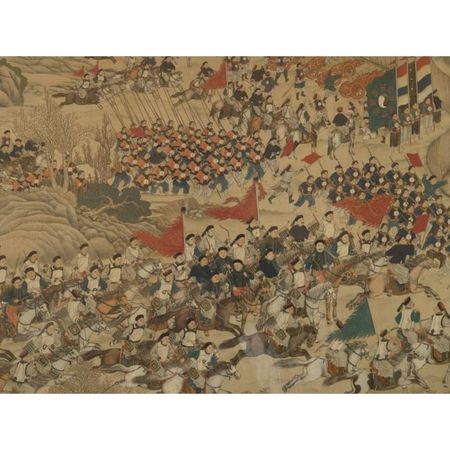 one painting from a set of eighteen, depicting the siege of the fortified city of Pingyu in western Henan province, occupied by the Nian rebels under the local Nian rebel leader Chen Daxi, engaged in a fierce battle with the Qing Imperial army in their efforts to regain control of the city, the Nian rebels behind the high walls built around the city and further fortified with a deep moat, the rebels with distinctive orange-red headscarves, their flags of yellow, white, red, blue and black high above the gates, the Imperial army on stocky horses, the locally recruited infantry of the Imperial army wearing uniforms of red, blue and white corresponding with the banners of the Imperial army, all armed with swords, spears, muskets, bows and arrows charging toward the city walls, storming them and attacking the rebels inside the walls, all under the leadership of a number of named generals, among them Zheng Yuanshan, Zhang Yao, Wu Yuanbing, Yin Jiabin and Sheng Bao

NOTE: This impressive painting belongs to a set of eighteen paintings depicting commemorative battle scenes between the Qing Imperial Army and the rebel forces of the Nian. Led by the charismatic leader Zhang Lexing, the Nian rebellion was an armed uprising that took place in northern China from 1853 to 1868, contemporaneously with the Taiping Rebellion (1851–1864) in southern China. The Nian forces fortified their captured cities and used them as bases to launch cavalry attacks against Qing troops in the countryside, prompting local towns to fortify themselves against Nian raiding parties. This painting is the seventh painting in the set and shows the siege and subsequent regaining of the city of Pingyu in western Henan province, in 1862 under the leadership of several important figures n the Qing Imperial military and civil forces, among them high-ranking and meritorious figures such as Wu Yuanbing and Yin Jiabin, Zheng Yuanshan and Zhang Yao, pictured on horseback looking straight at the viewer. All of them had been involved in pacifying unrests in surrounding villages before the victorious battle at Pingyu. For a more detailed account of this battle, compare Nian Jun Shi, Shanghai, 2001, pp. 309-310.

The painting was created as part of a large-scale Imperial painting project commissioned in 1885 by the Guangxu emperor to commemorate the government victories over the three major Chinese 19th century rebellions: the Taiping Rebellion, the Nian Rebellion and the Muslim Rebellions. A total of sixty-seven paintings each of similar large size and intricate details, were painted. They comprised twenty paintings for the Taiping War, eighteen for the Nian Rebellion, twelve for the Muslim rebellion in Yunnan and Yuizhou, and seventeen paintings for the Muslim rebellion in the northwestern borders. Compare Hongxing Zhang, in 'Studies in Late Qing Dynasty Battle Painting', Artibus Asiae, vol. LX, no. 2, 2000, p. 267.

The paintings were made for the the Ziguang Pavilion (Hall of Purple Splendour), a two-storey building on the western shores of the Central Lake in Zhongnanhai, located west of the Forbidden City. Just a century earlier, during the reign of the Qianlong emperor, the emperor would receive foreign envoys in this pavilion and celebrate the victories of his Ten Great Military campaigns. It was also where portraits of meritorious banner officers and large-scale paintings of battles commemorating Qianlong's military victories were displayed.

Only a very small number of paintings of the original sixty-seven Guangxu battle paintings have survived. A complete set of twelve paintings depicting scenes of the Muslim Rebellion in Yunnan and Yuizhou are in the Palace Museum, Beijing, illustrated in Hongxing Zhang, in 'Studies in Late Qing Dynasty Battle Painting', Artibus Asiae, vol. LX, no. 2, 2000, figs. 5 and 6. Three other paintings from the series commemorating victorious battles between the Imperial army and the forces of the Taiping Heavenly Army are known, one sold at Christie's London, 22nd April 1991, lot 101, two in our Hong Kong rooms, 9th October 2007, lot 1312, and 8th October 2009, lot 1660; another painting from the series commemorating the victories over the Muslim in the Northwest, was sold in our New York rooms, 15th September 2010, lot 367.

Of the eighteen paintings commemorating the Imperial campaign against the Nian rebels only two examples are known, both now in the National Gallery, Prague; the first depicting the defeat of the troops of the chief rebel Zhang Minhang in Shandong province in October 1861, the second the triumphant procession of government troops which concluded the campaign in August 1868, both published by Hongxing Zhang in 'Studies in Late Qing Dynasty Battle Painting', Artibus Asiae, vol. LX, no. 2, 2000, figs. 2 and 3.