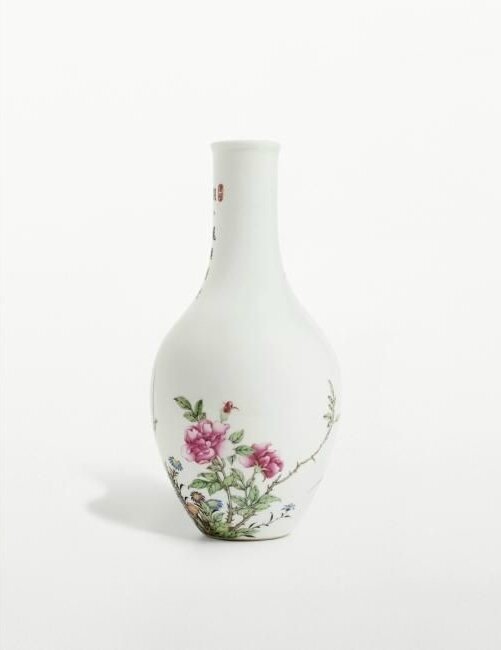 of the rarefied guyuexuan type, the body of tapering ovoid shape resting on an unglazed foot enclosing the countersunk mark, surmounted by the tall cylindrical neck finished with a slightly lipped rim, finely potted in the imperial kilns in Jingdezhen in white porcelain of the purest homogenous structure and applied with an even milky-white glaze suffused with tiny bubbles and with a smooth silky surface; enamelled in the imperial palace workshops within the confines of the Forbidden City in the finest opaque 'foreign colours', applied in subtly shaded washes and immaculately depicted detail with a pair of golden pheasants perched on a knotty trunk, the male balancing on one slender yellow leg, the other leg held up to the rich red breast, the head turned back over the shoulder with the long sharp beak flanked by short hairs below the bright oval eye, picked out in black, yellow, red and pink enamels, and the straw-yellow crest falling back over the thick pinkish orange ruff and multi-coloured wing feathers, the long tail depicted in iron red and sepia with yellow spot markings extending to the tip of the longest feather, the female crouching below her mate, the detailing of her feathers subtly picked out in sepia and the only colour being the yellow and puce of her eye; the thick knotted trunk set with spots of pale greenish moss and extending to angled branches sparsely sprouting pale pinkish leaves, small bright blue and deep purple asters with yellow stamens clustering at the base below a rose, the two large pink flowers and a single bud borne on thorny, leafy stems with detailing picked out in black on the green, the whole forming a continuous scene complimented on the neck with a couplet reading Zhaozhao long li yue. Suisui zhan chang chun, ('May you capture the "beautiful month' for days on end. May you seize enduring spring year upon year.') and three seals jiali ('beautiful'), sishi and changchun ('enduring spring at all seasons'), the countersunk base with the four-character mark Qianlong nian zhi written within a double-square in a characteristic greyish blue enamel

This bottle vase ranks among the most magnificent extant artefacts created in the imperial palace, and remains one of very few preserved outside the former Qing court collection now kept in Taipei and Beijing, or held in Museums elsewhere. Like all works of art painted by court artists to imperial order in the enamelling workshops of the Forbidden City in Beijing, the vase is unique. Falangcai vases are extremely rare even in the Palace Museums and most examples are of smaller size. The sensitive handling of the nature scene, outstanding brushwork, and range and subtlety of the enamel colours make this one of the finest paintings ever achieved on porcelain.

Falangcai ('foreign colours') designates enamelling on copper, porcelain and glass undertaken in specialized workshops in the Yangxindian (Hall of Mental Cultivation), in immediate vicinity of the imperial living quarters in the Forbidden City and under the Emperors' direct scrutiny. The enamelling workshops had been initiated by European artisans working at the court in the Kangxi period, who encouraged the production of new enamel colours to be applied in Beijing to blank porcelain vessels supplied for that purpose by the imperial porcelain kilns of Jingdezhen in Jiangxi province. Porcelain painting was here done in close physical proximity to court painting, and artists of the Painting Academy, both Chinese and Western, were also recruited to paint in the enamelling workshops. Painting styles therefore tend to show distinct influences of Western court artists, who introduced a naturalistic painting manner where the impression of volume, depth and perspective is conveyed through shading. The realistic representation of the birds and the accomplished shading of the flowers on the present vase show the direct influence of artists such as the Italian Giuseppe Castiglione (AD 1688 – 1766), who served as court painter under the three main Qing emperors, Kangxi (r. AD 1662-1722), Yongzheng (r. AD 1723-35) and Qianlong (r. AD 1736-95).

Castiglione himself was ordered to paint on porcelains in the palace workshops by the Kangxi Emperor, but no works can today be attributed to his hand; for the Yongzheng Emperor he painted veritable 'portraits' of porcelain vases on silk; and under the Qianlong Emperor he completed the impressive hanging scroll Beautiful Spring [Jin chun tu], a silk painting that depicts the motif of the Golden Pheasants, which appears on the Meiyintang vase (fig. 1). The Qianlong Emperor, for whom the present vase was painted, held Castiglione's work in particular high esteem and applied eleven seals to this painting. The strong influence of Castiglione's painting style on falangcai porcelain is obvious in the painting on the Meiyintang vase, whose colophon and seals also take up the 'Spring' message of the painting. Since the Beijing palace workshops were never restrained by the necessity of large-scale production, their creations are marked by an individuality of both their painting styles and their colouring. Individual court artists would be responsible for complete works – rather than specializing on a single aspect only – and the enamels could be mixed in small quantities for specific jobs, rather than being selected from fixed, limited colour schemes like at Jingdezhen with the wucai (famille verte) or fencai (famille rose) palettes.

Although all falangcai work is exquisite, there nevertheless exist differences in quality even among this select group of wares. The perceptive nature study on the Meiyintang vase, with its poignant and touching evocation of the close silent bond between two birds turned away from each other, is a masterwork of painting that goes far beyond the simple depiction of a charming garden scene. The resplendent, powerful male bird, majestically planted onto the tree trunk, is shown proudly standing guard to protect a gentle, delicate female that crouches close to the tree, well concealed in its camouflage plumage against the colours of the bark.

The open composition with large areas of white space, not constrained by any decorative borders, is handled like that of a painted handscroll, and the quality of the brushwork equally approaches that of ink paintings on paper or silk. The variety of enamel tones employed, particularly for the cocks' plumage, is remarkable; unusual shades were mixed as deemed necessary, for example for the fresh, tender tree leaves, which have just sprouted and not yet acquired their full colour; and texture is rendered through application of thicker enamel, for example for the birds' legs and claws, and some white fungus growing on the tree.

The elegant shape of the Meiyintang vase, known as ganlanping ('olive-shaped vase') – among the largest that were enamelled in the Beijing workshops – is known from a small number of other examples, mostly in the National Palace Museum, Taiwan, all of which have been treated to some of the best and most ambitious painting. Of four vases of this form in Taipei two are painted with flocks of birds, one with a landscape and one with pavilions, see the exhibition Qing gongzhong falangcai ci tezhan/Special Exhibition of Ch'ing Dynasty Enamelled Porcelains of the Imperial Ateliers, National Palace Museum, Taipei, 1992, pls 127-130 (fig. 2); a pair, with flowering and fruiting plants very similar to one in Taipei, but without birds, which entered the Worcester Royal Porcelain Works Museum, England, in the late 19th century, was sold in our London rooms, 18th June 1985, lot 200, and is illustrated in Idemitsu Bijutsukan zōhin zuroku. Chūgoku tōji/Chinese Ceramics in the Idemitsu Collection, Tokyo, 1987, pl. 232; one in the Musée Guimet, Paris, is painted with a tied bow, illustrated in Xavier Besse, La Chine des porcelaines, Paris, 2004, pl. 54; and another landscape-decorated vase, companion to the one in Taipei, is illustrated in Julian Thompson, The Alan Chuang Collection of Chinese Porcelain, Hong Kong, 2009, pl. 118. One pair of vases of this form, with a design of cranes and a seal script reign mark, on the other hand, was decorated at Jingdezhen and represents yangcai rather than falangcai, see Liao Pao Show, Huali cai ci. Qianlong yangcai/Stunning Decorative Porcelains from the Ch'ien-lung Reign, Taipei, 2008, pl. 44. The same motif of a pair of golden pheasants appears on three smaller falangcai vases of the Qianlong reign, but in all three cases both the message of the painting and the manner of its rendering are very different. The birds are depicted in a more romantic, idealized manner, as a loving couple perched side by side and turned towards each other; the brushwork clearly reveals a different hand; and the scenes are confined to the main part of the body, with formal borders decorating the neck.

On one of these vases, a pear-shaped vase with garlic-head neck from the Charles Russell and Barbara Hutton collections, the golden pheasants appear with the same plants and the same colophon and seals, but in a different composition, see R.L. Hobson, Bernard Rackham and William King, Chinese Ceramics in Private Collections, London, 1931, col. pl. 28, and the sale in our London rooms, 2nd June 1971, lot 263 (fig. 3). On a second vase, a yuhuchun ping in the Tianjin Municipal Museum, they are shown among peonies, rocks and a fruiting bush, accompanied by a different poem, see Tianjin Shi Yishu Bowuguan cang ci, Hong Kong, 1993, pls 169 and 170 (fig. 4). On the third piece, a vase with curved handles from the collection of Roger Lam, they are grouped among roses, rocks and a flowering tree, also matched with a different colophon, see Hugh Moss, By Imperial Command. An Introduction to Ch'ing Imperial Painted Enamels, Hong Kong, 1976, pl. 72, and the sale in these rooms, 23rd October 2005, lot 188 (fig. 5). The Musée Guimet, Paris, further holds a garlic-head vase similar to the Russell/Hutton example, but with a different pair of birds; see Soame Jenyns, Later Chinese Porcelain: The Ch'ing Dynasty (1644-1912), London, 1951, pl. LXXVIII and LXXIX: 1. In the Palace Museum, Beijing, is a related vase from the Qing court collection, but without any birds; see The Complete Collecton of Treasures of the Palace Museum. Porcelains with Cloisonné Enamel Decoration and Famille Rose Decoration, Hong Kong, 1999, pl. 23 (fig. 6).

This Beijing enamelling work, which is today known as falangcai after the term used in the records of the Palace Workshops (zaobanchu) of the Imperial Household Department (neiwufu), was previously often referred to under the term Guyuexuan ('Ancient Moon Terrace'). No structure of that name is, however, recorded among Qing palace buildings, and there seems to be no other justification for that term to be applied to falangcai either. Already fifty years ago Soame Jenyns remarked (op. cit., p. 85) that the term is a misnomer, erroneously used for what ought to be called falang, and stated that pieces inscribed with this term, mainly small pieces of glass and porcelain and chiefly snuff bottles, tend to be of inferior quality and later date.