PARIS.- The sale of Important European Silver, Gold Boxes & Objects of Vertu at Sotheby’s Paris on May 17 will include exceptional items from all over Europe. The finest piece in the sale is an extremely rare French 12th century silver drinking cup. 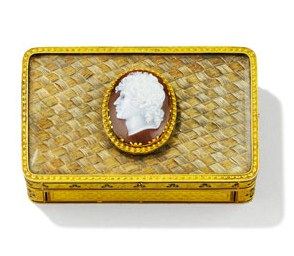 Exceptional gold and enamel snuff-box, inset with an agate cameo of Napoleon's brother-in-law (and King of Naples) Joachim Murat and his hair. Est. €60,000-80,000. Photo Sotheby's

The sale begins with 70 lots of vertu and gold boxes of varied private provenance.

The stand-out lot promises to be an exceptional gold and enamel snuff-box, inset with an agate cameo of Napoleon's brother-in-law (and King of Naples) Joachim Murat and his hair (est. €60,000-80,000*).

More unusual items include a royal tortoiseshell quill-cutter, piqué in gold with fleurs-de-lys below the French crown (Paris c.1740) – such instruments were not produced commercially until the early 19th century (est. €10,000-15,000); and an amusing pair of coloured feather and verre églomisé plaques, each featuring a parrot in cage (c.1790), attributed to Jean-Jacques Hettlinger, one-time Director of the Sèvres Porcelain Factory (est. €2,000-3,000).

Rounding off the section is a small, jewelled gold, parcel-gilt and enamel travelling altar made in Germany or Austria around 1880. Its ebonized base is applied with openwork scrolls below the Resurrection of Christ in a brilliantly- decorated niche, topped by the figure of Justice (est. €15,000-20,000). 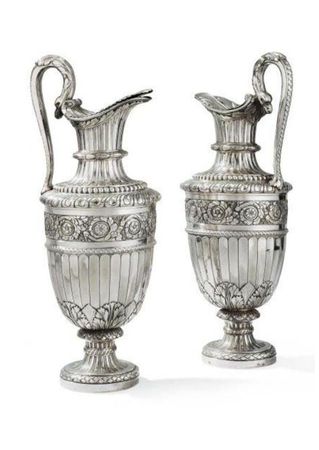 An important pair of large covered ewers (est. €50,000-80,000), and a set of four silver candlesticks (est. €70,000-100,000), hail from the Saxe-Teschen Service made by Johan Ignaz Wurth (1742-92) in Vienna in 1781. This celebrated neo-Classical service, of superlative quality, ran to 350 pieces and weighed a total 680kg. It was commissioned by Marie-Antoinette's sister, Archduchess Maria-Christina of Austria, and Prince Albert of Saxony, created Duke of Teschen upon his weddings. The service was ordered upon his appointment as Joint Governor of the Austrian Netherlands.

German highlight should be a pair of silver wine-coolers and ensuite verrière by Gustav Friedrich Gerich (Augsburg 1804), engraved with princely coronet, a silversmith in high demand among late 18th century imperial courts (est. €60,000-80,000).

Another lot of noble German pedigree is a silver christening ewer with basin by Schleisser & Söhne (Hanau c.1890), inset with 135 engraved medallions featuring the arms of aristocratic German families, and engraved with verses from the Bible (est. €6,000-9,000). The sale also features two eye-catching items of older German silver: a silver seal matrix (c.1557) made for Heinrich VI, Lord of Plauen (1536-72), with scenes on the handle thought to commemorate the burning of Plauen in 1548 (est. €20,000-30,000); and a silver case for an imperial seal, by Johan Pick (Frankfurt c.1675), with detachable cover finely engraved with diplomats presenting and receiving a sealed charter before Leopold I. The precious metal and engraving are unusual for a seal case, and suggest the charter must have been of great significance (est. €25,000-30,000). One of the highlights of the sale is sure to be an extremely rare silver-gilt tea- and coffee-service by Martin-Guillaume Biennais (Paris 1798-1819), similar to the one Biennais made for Grand Duke Mikhail Pavlovich of Russia. The coffee-pot is inspired by those Biennais made for Napoleon and his sister, Princess Pauline Borghese (est. €150,000-200,000).

Another star lot is a pair of silver-gilt salvers by Robert-Joseph Auguste, engraved with the royal arms of Portugal (Paris 1784). Auguste's wealth, and the confidence placed in him by the French court, were extremely important to the Portuguese. The French court was party to this confidence-building and ostentatiously invited Auguste and his son Henri to present his toilet service for the Queen of Portugal at court in Paris in 1785 (est. €150,000-200,000). 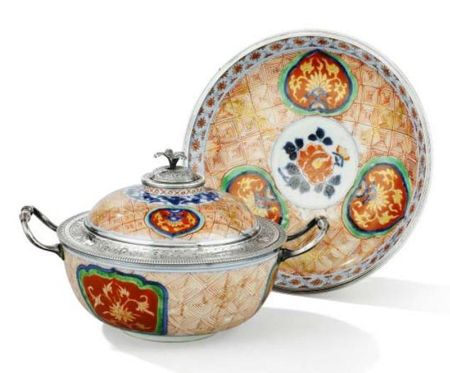 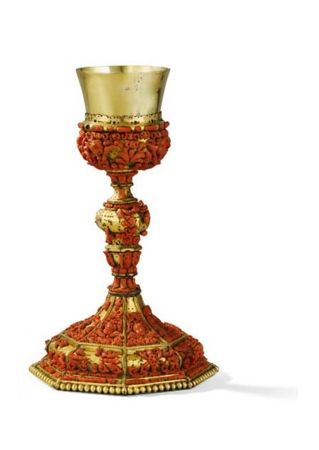 From Peru comes a late 18th century, silver-gilt, enamelled, emerald- and pearl-set monstrance. The blue and green enamel panels, and the sunburst formed by leafy openwork scrolls, are typical of Peruvian monstrances of the Baroque era (est. €20,000-30,000).

King Farouk of Egypt was the original owner of a gold Art Nouveau couvert de voyage by Gustave Keller (Paris c.1900), probably made for the Egyptian royal yacht Mahroussa (est. €18,000-20,000). 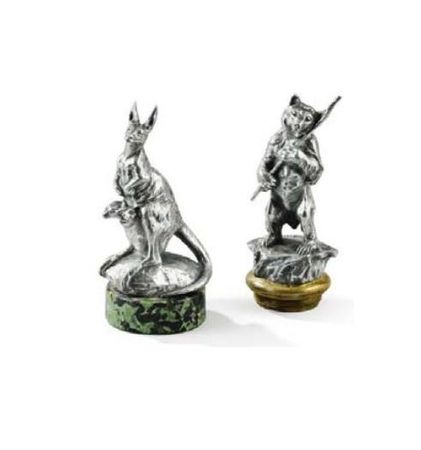 Finally come two curious silver-plated car mascots designed in Paris by Spanish-born Antoine Bofill (1875-1920). One takes the form of a bear on a brass radiator cap, the other features a kangaroo on a marble plinth (est. €3,000-4,000).

* estimates do not include buyer's premium