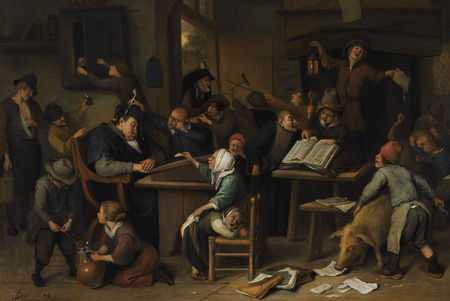 AMSTERDAM.- The highlight of the Old Master Paintings sale at Sotheby’s Amsterdam on Tuesday, 10th May, 2011 is A school class with a sleeping schoolmaster by Dutch Golden Age Artist Jan Steen (1626-1979). This painting may be regarded as one of Jan Steen’s finest treatments of a schoolroom interior. Furthermore, it is thus far his only known representation of a schoolroom that is both signed and dated and which has remained in private hands.

The work has a remarkable provenance, going back as far as 1764, including the distinguished Baring Collection in the 19th Century. This exciting picture, dated 1672, perfectly demonstrates Steen’s mastery at depicting the humorous side of everyday life, which remains as true to life and as successful in capturing our attention today as it was to his viewers in the 17th Century. A school class with a sleeping schoolmaster is offered for sale with an estimate of €300,000 - 400,000.

Jan Steen painted this Schoolroom in 1672, in his native town of Leiden where he had returned to from Haarlem in 1670 after the death of his father. This is one of only a few pictures known by Steen that are both signed and dated. In his later works, such as this, the focus seems to be more on pure entertainment, as is clearly the case here: Steen has literally given the children every inch of this painting to go all out and to take as much advantage of the sleeping schoolmaster as possible.

Martine Lambrechtsen, Head of the Old Master Paintings Department at Sotheby’s Amsterdam, commented:‘Steen was a born storyteller and with a picture like this, he was able to display his talent to best effect. To viewers of the 17th Century, this was the ultimate vermaak, or amusement, watching a scene like this where everything is in complete disarray.’

A school class with a sleeping schoolmaster entered the distinguished collection of Thomas Baring in 1846. Besides this outstanding work by Jan Steen other important and high quality pictures from the Dutch Golden Age were included in this remarkable collection. Today most paintings that were once part of the Baring Collection are included in collections of renowned (inter)national museums.

The sale also features a strong selection of early Dutch, Flemish and German paintings. One of the highlights in this section is a portrait of Elector Frederick III ‘the Wise’ of Saxony (1463-1525) by Lucas Cranach the Elder (est. €60,000 - 90,000). This is one of a number of portraits by Cranach painted of his most important early patron and was possibly commissioned by John Frederick the Magnanimous (1503-1554) in 1532.

The sale will be on exhibition at Sotheby’s Amsterdam beginning 6 May from 10am until 5pm. During the exhibition highlights from the important Old Master & British Paintings sale in London (6 and 7 July 2011) will also be shown. 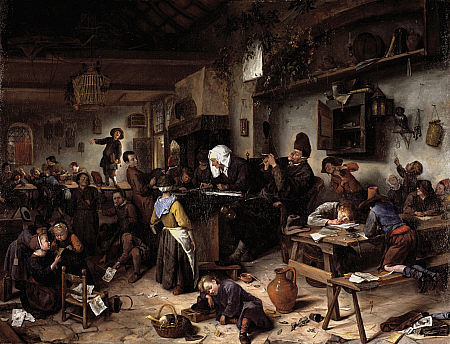 This is the largest of several schoolroom scenes by Steen. The composition is loosely based on Raphael’s fresco of ‘The School of Athens’ in the Vatican, depicting the greatest scholars of antiquity. Basing this unruly scene on the famous gathering of greats, Steen made a visual joke, which is also echoed in the incidental detail. The adults seem oblivious to the unruly behaviour of their pupils. At the right is an owl, traditional symbol of wisdom and attribute of the goddess Athena. Here a boy offers it a pair of spectacles alluding to the Dutch proverb ‘What use are glasses or light if the owl does not want to see?’ This could apply to both pupils and teachers. In this scene Steen used his three children, Catherina, Cornelis and Johannes, as models for the little girl, the boy being punished and the boy holding a paper.

Jan Havickszoon Steen (c. 1626 – buried February 3, 1679) was a Dutch genre painter of the 17th century (also known as the Dutch Golden Age). Psychological insight, sense of humour and abundance of colour are marks of his trade.

Life. Steen was born in Leiden, where his well-to-do, Catholic family were brewers and ran the tavern The Red Halbert for two generations. Like his even more famous contemporary Rembrandt van Rijn, Jan Steen attended the Latin school and became a student in Leiden. He received his painterly education from Nicolaes Knupfer (1603–1660), a German painter of historical and figurative scenes in Utrecht. Influences of Knupfer can be found in Steen's use of composition and colour. Another source of inspiration were Adriaen van Ostade and Isaac van Ostade, painters of rural scenes, who lived in Haarlem. Whether Steen actually studied with Ostade is not known.

In 1648 Jan Steen and Gabriel Metsu founded the painters' Guild of Saint Luke at Leiden. Soon after he became an assistant to the renowned landscape painter Jan van Goyen and moved into his house on the Bierkade in The Hague. On Oct 3, 1649 he married van Goyen's daughter Margriet, with whom he would have eight children. Steen worked with his father-in-law until 1654, when he moved to Delft, where he ran brewery De Roscam (The Curry Comb) (or De Slang (The Snake)) without much success. After the explosion in Delft in 1654 the art market was depressed, but Steen painted his famous A Burgomaster of Delft and his daughter. It does not seem to be clear if this painting should be called a portrait or a genre work.

Steen lived in Warmond, just north of Leiden, from 1656 till 1660 and in Haarlem from 1660 till 1670 and in both periods he was especially productive. In 1670, after the death of his wife in 1669 and his father in 1670, Steen moved back to Leiden, where he stayed the rest of his life. When the art market collapsed in 1672, called the Year of Disaster, Steen opened a tavern. In April 1673 he married Maria van Egmont, who gave him another child. In 1674 he became president of the Sint Lucas Guild. Frans van Mieris became one of his drinking companions. He died in Leiden in 1679 and was interred in a family grave in the Pieterskerk.

﻿Works.  Daily life was Jan Steen's main pictorial theme. Many of the genre scenes he portrayed, as in The Feast of Saint Nicholas, are lively to the point of chaos and lustfulness, even so much that a Jan Steen household, meaning a messy scene, became a Dutch proverb (een huishouden van Jan Steen). Subtle hints in his paintings seem to suggest that Steen meant to warn the viewer rather than invite him to copy this behaviour. Many of Steen's paintings bear references to old Dutch proverbs or literature. He often used members of his family as models, and painted quite a few self-portraits in which he showed no tendency of vanity.

Daily life was Jan Steen's main pictorial theme. Many of the genre scenes he portrayed, as in The Feast of Saint Nicholas, are lively to the point of chaos and lustfulness, even so much that a Jan Steen household, meaning a messy scene, became a Dutch proverb (een huishouden van Jan Steen). Subtle hints in his paintings seem to suggest that Steen meant to warn the viewer rather than invite him to copy this behaviour. Many of Steen's paintings bear references to old Dutch proverbs or literature. He often used members of his family as models, and painted quite a few self-portraits in which he showed no tendency of vanity.

Steen was prolific, producing about 800 paintings, of which roughly 350 survive. His work was valued much by contemporaries and as a result he was reasonably well paid for his work. He did not have many students—only Richard Brakenburg is recorded—but his work proved a source of inspiration for many painters. (source Wikipedia)