A very rare yellow enamel-decorated dish. Xuande six-character mark and of the period (1426-35)

A very rare yellow enamel-decorated dish. Xuande six-character mark and of the period (1426-35) 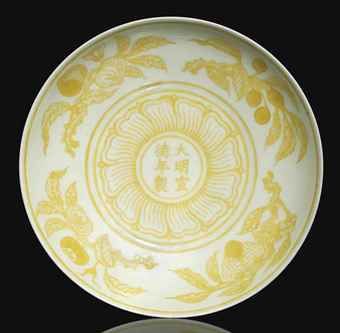 Delicatelly potted with gently rounded walls and supported on a short foot, the interior enamelled with the six-character reign mark enclosed by overlapping petals, the cavetto with fruiting clusters of peaches, persimmons, lychees and pomegrantes, the exterior with four detached lotus sprays, the base unglazed; 7½ in. (19 cm.) diam. Estimate £300,000 - £500,000 ($501,300 - $835,500)

Provenance: Acquired in Southern Europe in the 1950s.

Property of a private European collector.

This dish is a fascinating example of the way in which new archaeological excavation and research can change the way that scholars view a rare object. The current dish is one of only two identical Xuande dishes known with this type of decoration. The other dish of this type is in the collection of the famous British scholar-collector Sir Percival David, and was included in the International Exhibition of Chinese Art at the Royal Academy in London in 1935-6, as exhibit number 1574 (illustrated in colour by R. Scott in 'Further Discoveries from the Imperial Kiln Site at Jingdezhen', Orientations vol. 23, no. 4, April 1992, p. 51, fig. 16) (Fig.1). In 1935 no early 15th century imperial porcelains decorated solely in a single overglaze enamel colour were known and the dish was conservatively dated simply as 'Ming'. In later years Margaret Medley, respected scholar of Chinese ceramics and curator of the Percival David Foundation, wanted to date the Foundation's dish in accordance with its reign mark, but was, again, restricted by the lack of excavated evidence to support such a dating. She reluctantly settled for a conservative date of 16th century.

In the intervening years a wealth of new excavated material has allowed scholars to revisit these intriguing vessels and come to the conclusion that they are indeed imperial porcelains of the Xuande reign. Firstly, there is now ample evidence of single overglaze enamels being used to decorate imperial porcelains in the 15th century, as seen on a shard excavated from the Xuande strata in Jingdezhen and illustrated by the Chang Foundation in Xuande Imperial Porcelain excavated at Jingdezhen, Taipei, 1998, p. 120, pl. F11 (Fig 2.). From the excavation of the Yongle (1403-24) strata at the imperial kilns at Jingdezhen, a stand with green enamel decoration was excavated in 1994 (illustrated in Imperial Hongwu and Yongle Porcelain excavated at Jingdezhen, Taipei, 1996), while an early 15th century holy water bottle, similarly decorated with overglaze green enamel, was sold for a record price by Christie's London on 11 May 2010, lot 232 (Fig. 3). The latter had also previously been ascribed a 16th century date for lack of excavated 15th century ccomparisons. In 1984 a bowl decorated solely in overglaze iron red enamel was excavated from the late Yongle stratum at the imperial kilns (illustrated in Imperial Porcelain of the Yongle and Xuande Periods Excavated from the Site of the Ming Imperial Factory at Jingdezhen, Hong Kong, 1989, pp. 134-5, no. 26), while a Xuande stemcup decorated solely in iron red oveglaze enamel was excavated in 1993 (illustrated in Jingdezhen chutu Yuan Ming guanyao ciqi, Beijing, 1999, p. 225, no. 210).

The use of overglaze yellow enamel as a ground colour in the Xuande reign on dishes with underglaze blue decoration is well known from examples preserved in international collections. This Xuande use of overglaze yellow enamel has now been confirmed by the excavation of a number of similarly decorated dishes from the Xuande strata at the Jingdezhen imperial kilns (illustrated in Jingdezhen chutu Yuan Ming guanyao ciqi, op. cit., pp. 222-4, nos. 206-9). The use of painting in overglaze green enamel has also been confirmed by the excavation of the partial doucai dishes from the Xuande strata of the imperial kiln site (illustrated ibid., p. 227, no. 212). Although other parts of the duck and lotus pond decoration on these dishes has underglaze blue outlines, or iron red overglaze outlines, the lotus leaves, stems and sagittaria leaves are all painted in overglaze green enamel without outlines. The use of both yellow and green enamels on biscuit in both the Yongle and Xuande reigns has, of course, also been confirmed by examples excavated at the imperial kilns (see Imperial Porcelain of the Yongle and Xuande Periods Excavated from the Site of the Ming Imperial Factory at Jingdezhen, op. cit.,, p. 138, no. 28, for a Yongle example, while a Xuande dish with these two enamels applied to the biscuit is illustrated in Jingdezhen chutu Yuan Ming guanyao ciqi, op. cit., p. 262, no. 265). Yellow enamel was also used in the Xuande reign to provide an all-over colour on imperial monochrome wares (see the yellow lidded ewer and bowl illustrated ibid., p. 261, nos. 263 and 264).

It is interesting to look at the choice of decoration on the interior of the current dish and its companion in the Percival David collection. Firstly, the fruiting sprays accord well with fruiting sprays depicted in underglaze cobalt blue on larger dishes excavated from the Xuande strata at the imperial kilns (see, for example, Jingdezhen chutu Yuan Ming guanyao ciqi, op. cit., pp. 193 and 197, nos. 152 and 158). Fruiting sprays came to prominence on imperial underglaze blue-decorated porcelains in the Yongle reign, but continued to find favour in the Xuande reign. It is notable that the ceramic decorator of the two yellow-enamelled dishes has been at pains to try and emulate the effect of the end of the branches being torn, rather than cut, from the bough, which is clearly seen on the blue and white examples. Since the branches are depicted in outline in yellow enamel, which flowed when fired, the decorator has, of necessity, made this feature somewhat larger than it appears on the blue and white examples.
The feature of surrounding the central reign mark with petals displays an interesting continuity of style with imperial porcelains of the Yongle reign. Indeed, a petal band encircling the central roundel in a bowl or dish can be seen on imperial porcelains decorated in underglaze blue as early as the Hongwu reign (see Imperial Hongwu and Yongle Porcelain excavated at Jingdezhen, op. cit., pp. 88-91, nos. 11 and 12). A petal band also encircles the central medallion on an underglaze blue-decorated bowl, which was excavated from the late Yongle stratum at the imperial kilns in 1984 (illustrated in Imperial Porcelain of the Yongle and Xuande Periods Excavated from the Site of the Ming Imperial Factory at Jingdezhen, op. cit.,, pp. 166-7, no. 42). A number of Yongle porcelains have reign marks encircled by a petal band on their interiors. The majority of these are white wares (see ibid, pp. 282, no. 110, and pp. 364-5, nos. 158-160), which makes the marks and petal bands rather hard to see. However, the reign mark on an underglaze blue decorated Yongle cup in the collection of the Palace Museum, Beijing (illustrated in Complete Collection of Treasures of the Palace Museum 34 Blue and White Porcelain with Underglaze Red (I), p. 82, no. 79) is not only easier to see , but particularly relevant to discussion of the current dish, since the petals that encircle the reign mark have the elegant S-form seen on the yellow-enamelled vessels. It is clear that reign marks continued occasionally to be encircled with petals on the interior of porcelain vessels of the Xuande reign. The National Palace Museum, Taipei, has a white stem bowl with such a mark (see Catalogue of the Special Exhibition of Selected Hsan-te Imperial Porcelains of the Ming Dynasty, Taipei, 1998, pp.244-5, no. 95), and also a blue and white stem bowl (illustrated ibid., pp. 230-1, no. 88). The petal band encircling the reign mark on the yellow-enamelled dishes is in keeping with this tradition.
It is important to consider the medium used, when assessing the style in which the current yellow-enamelled dish and the Percival David dish are painted. Painting in lead-fluxed overglaze enamels is very different to painting in underglaze blue or even painting in overglaze iron red enamel. In the case of the iron red enamel, this is an over-saturated enamel which stays in place when it is fired, and thus can be painted using fine, even, sinuous lines. Painting in yellow or green overglaze enamels in the early Ming period was much more difficult, as can clearly be seen on all the excavated examples. The lead flux used in the preparation of the enamel colours meant that when they were fired they flowed and spread out. Fine lines could not be achieved and complex outlines were precluded. The result was for the decoration to look a little more static than might be expected if the decoration was in undeglaze blue, or indeed if these Ming dynasty porcelains had been painted in the later enamels of the famille rose palette, the compositions of which were adjusted to give somewhat greater control.
It is greatly satisfying to scholars who have spent many years researching Chinese enamels, that the current dish, and the dish from the collection of Sir Percival David, can now be accepted as extremely rare examples of imperial porcelain of the Xuande reign.