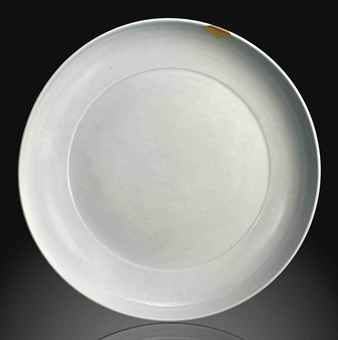 Notes: This unusually large dish has a particularly lovely tianbai 'sweet white' glaze, which resembles the white jade of which the Yongle Emperor was so fond. In fact the emperor evinced a predilection for the colour white and white-glazed porcelains dominated imperial orders during his reign. This was undoubtedly in part because of the association of white with Buddhism, since the Yongle emperor was a devout Buddhist. Tibetan Buddhism (Lamaism) had become popular in China under Mongol rule and the Hongwu emperor had also invited high-ranking Lamaism abbots to the Chinese capital. TheYongle Emperor was even more anxious to establish good relations with the various Lamaism sects. He invited the famous Khama-pa abbot, Halima, and also the abbot of the Sa-skya-pa to Nanjing. They came to the Ming capital in 1407 and 1413, respectively, and were received with great honour. Thereafter missions and gifts were exchanged with these and other Tibetan Lamas.
The emperor ordered significant quantities of white porcelain to be made for the ceremonies carried out during the visits of these important Tibetan abbots. Some of these porcelains remained in the Palace, while others were taken or sent to the important monasteries in Tibet as imperial gifts.

However, there may have been other reasons for the Yongle Emperor's preference for white porcelain. During one period in his life as a prince, he lived in one of the Yuan palaces, and, given the importance of white at the Mongol court, this palace probably contained a good deal of white material. Also when he was a prince an official predicted that he would 'put a white hat on his rank'. This is a play on the Chinese character for emperor (huang), which is made up of the character for prince (wang) with the character for white (bai) on top of it. Hence it was a prediction that he would become emperor, although he was not the heir apparent. The emperor also demonstrated a genuine aesthetic appreciation for understated white objects. Records note that on one occasion he returned all the elaborate and expensive gifts presented to him, retaining only those made of plain white jade.

It is however, rare to find white porcelains from the Yongle reign decorated with five-clawed imperial dragons, and indeed very rare to find any Yongle dishes decorated with imperial dragons. A tianbai glazed lobed rim bowl in the collection of the Palace Museum, Beijing, bears both a Yongle reign mark and an anhua decoration of dragons and a small pear-shaped ewer with similar glaze, from the same collection also has an anhua design of dragons in clouds (illustrated in The Complete Collection of Treasures of the Palace Museum 37 Monochrome Porcelain, Hong Kong, 1999, pp. 110-2, nos. 101 and 102). A Yongle-marked tianbai-glazed stembowl, a lobed, semi-bodiless, tianbai-glazed bowl, and a tianbai-glazed small cup in the collection of the National Palace Museum, Taipei, are all decorated with anhua dragons (illustrated in Porcelain of the National Palace Museum - Monochrome Ware of the Ming Dynasty Book I, Hong Kong, 1968, pp. 40-45, nos 4-6). A similarly decorated tianbai ewer was excavated from the early Yongle stratum at the imperial kilns in 1983 (illustrated in Imperial Porcelain of the Yongle and Xuande Periods Excavated from the Site of the Ming Imperial Factory at Jingdezhen, Hong Kong, 1989, pp. 110-11, no. 14). Interestingly rim fragments from two white bowls with tianbai glazes and anhua dragon decoration were found at the site of the early Ming palace at Nanjing (illustrated in A Legacy of the Ming, Hong Kong, 1996, p. 47, nos. 46 and 50). A tianbai-glazed jar has been excavated from the site of the imperial kiln at Zhushan, Jingdezhen, which also has a design of anhua dragons. Two tianbai-glazed dishes decorated with anhua dragons are in the collection of the British Museum, the largest of which was given by diplomat and scholar Sir John Addis (illustrated by J. Harrison-Hall in Ming Ceramics in the British Museum, London, 2001, pp. 101-2, nos. 3:4 and 3:7).

Tianbai-glazed dishes with dragons, are exceptionally rare, and it is interesting to speculate on how they were used at court. Although dishes are usually associated with day to day activities within the palace, it seems probable that a large white dish with dragon decoration, like the current example, would have been used in important court ritual. White porcelains were particularly suitable for use in Buddhist ritual, and for offerings at the altar of the Imperial Ancestors. Research has shown that after the Hongwu Emperor's edict of 1369 requiring that vessels used at the imperial altars should be made of porcelain, a number of the bronze vessel shapes were exchanged for simple bowl and dish shapes, although they retained the names of the bronze originals (see C. Lau, 'Ceremonial Monochrome Wares of the Ming Dynasty', The Porcelains of Jingdezhen, R. Scott (ed.), London, 1993, pp.83-100). The current dish is likely to have been one of those important vessels used in imperial sacrifice.