"Illuminating the Serenissima: Books of the Republic of Venice" @ Isabella Stewart Gardner Museum

"Illuminating the Serenissima: Books of the Republic of Venice" @ Isabella Stewart Gardner Museum BOSTON, MA.- From May 3 to June 19, visitors to the Isabella Stewart Gardner Museum are invited to take a closer look at seven Venetian manuscripts from the museum’s extensive rare books collection in a unique, compact exhibition entitled Illuminating the Serenissima: Books of the Republic of Venice. Organized by Dr. Anne-Marie Eze, Andrew W. Mellon Postdoctoral Curatorial Fellow, whose recent research has focused on Isabella Stewart Gardner as book collector, this collection of beautifully decorated Venetian commissioni will be on view in the museum’s Long Gallery, where they have been kept in covered bookcases since Isabella Gardner’s day.

La Serenissima, or the Most Serene Republic of Venice, existed for over a millennium from the late seventh century to 1797. At the height of its power in the fifteenth and sixteenth centuries, it was the center of an empire extending from mainland Italy to the eastern Mediterranean . The head of state was a Doge elected for life by the nobility, whose privilege and duty it was to manage Venice ’s political affairs.

Books, called commissioni, contained the contracts of Venetian noblemen elected by their peers to oversee the Republic’s provinces usually for sixteen months, or to be lifelong administrators of the city of Venice . From the second half of the fifteenth century until the fall of the Republic, office-holders had their commissioni elaborately written, illuminated, and bound by hand, and conserved them for posterity. Commemorating service to the state, personal achievement, and taste, these manuscripts were objects of privilege, power, and beauty.

Illuminating the Serenissima: Books of the Republic of Venice draws attention to this distinctly Venetian category of book through a presentation of seven illuminated and finely bound manuscripts, collected by Isabella Gardner and recently the object of new research. These seven form part of a group of twenty Venetian manuscripts in the Gardner ’s collection.

“Commissioni are important to the study of Venetian art and history, because they are dated sources of styles of illumination, bookbinding, and iconography, as well as of heraldry, portraiture, and biographical information about their owners,” says Anne-Marie Eze, Andrew W. Mellon Postdoctoral Curatorial Fellow at the Isabella Stewart Gardner Museum and the exhibition’s curator. “Though thousands were produced under the Republic, commissioni are intrinsically rare because only two copies of each were ever made: one deposited in the ducal chancellery and the other presented to the officer-elect.”

Based on new research into Isabella Gardner as bibliophile and the rare books she collected, Illuminating the Serenissima reveals hidden treasures of the collection which are ordinarily kept shut in bookcases in the museum’s Long Gallery and therefore off-limits to the public. The exhibition shows the evolution over three centuries of styles of illuminating and binding of commissioni through the finest examples from Gardner ’s collection of Venetian manuscripts.

“We are excited to reveal a seldom seen part of the Gardner ’s collection,” says Anne Hawley , the Norma Jean Calderwood Director of the Isabella Stewart Gardner Museum. “This exhibition not only boasts beautiful objects that are usually inaccessible to visitors, but further illustrates Isabella Gardner’s passion for Venetian art and history.”

Isabella Gardner acquired four of the books displayed with thirteen other Venetian manuscripts in 1903 from her friend Charles Eliot Norton (1827-1908), Harvard’s first professor of art history, a Dante scholar and expert book collector. Concerned that his cherished collection would be dispersed and the books taken apart for their lucrative illuminations and bindings, Norton sold them to Isabella Gardner whom, their correspondence shows, he believed was the only American collector cultivated enough to appreciate their artistic and historical value as a collection. “I am glad to think of the Manuscripts as in your possession,” wrote Norton to Gardner on the completion of the sale, “and safe from destruction by fire.”

Intact commissioni are rare in American libraries and museums, where single illuminated leaves or fine bindings without their pages are more commonly found. Kept closed in covered bookcases—and so protected from damaging exposure to light—for over a century, the Gardner Museum’s collection of commissioni is in a remarkable state of preservation. Just one object received conservation treatment in preparation for the exhibition: a rare eighteenth-century repoussé and chased silver binding with a depiction of Venice as Justice personified, which had never been cleaned since its arrival in the museum at the end of the nineteenth century.

“Cleaning the covers reduced grime and tarnish built up over at least one hundred years,” says Holly Salmon , Associate Objects Conservator at the Gardner Museum , who spent ten hours cleaning the upper cover and seal of the book. “Now the binding’s overall appearance is brighter and details of the beautiful silversmithing are more visible.”

In fact, Eze discovered a previously unnoticed maker’s mark on the binding’s covers, which will hopefully result in future identification of the unknown silversmith and other examples of his fine work.

The title of the exhibition, Illuminating the Serenissima, refers both to the use of luminous colors (especially gold and silver) to decorate the opening pages and bindings of the commissioni, and to the books’ enlightenment of the past glory of the Republic of Venice . The exhibition shows examples of the decorative styles and techniques of renowned Venetian illuminators and binders of the Renaissance, including Leonardo Bellini (active ca. 1443-1490), the T.° Ve. Master (active 1520s-1560s), and the Mendoza Binder (active 1518-1555), as well as by anonymous seventeenth and eighteenth-century masters.

“The production of commissioni ensured the continued practice of the arts of illumination and fine binding in Venice for over three centuries after the invention of the printed book,” adds Eze.

ILLUMINATION • The text of commissioni was written by official scribes on vellum (prepared animal skin) and authenticated by a ducal notary. From the 1460s, the opening page was decorated by hand with luminous colors, especially gold. The decoration in late fifteenth-century commissioni was restricted to the border and initial letters of the text, which were adorned with fantastical flowers, gold-leaf circles, and putti (nude winged children) supporting the recipient’s coat of arms. During the 1500s illumination expanded on the page, limiting text to an inscription of the Doge’s name. Borrowing subjects from monumental painting and sculpture, such as the leone andante (a full-length winged lion of Venice ’s patron saint Mark), illuminators created miniatures similar to painted, compartmentalized ceilings. From the late sixteenth century, writing disappeared from the opening page enabling illuminations to resemble small, framed devotional paintings with a portrait of the noble official, accompanied by his patron saint, adoring the Virgin and Child. This development further personalized commissioni and emphasized their owner’s piety.

BINDING • After the leaves of a commissione had been written and illuminated, they were sewn together and fastened to boards which were covered with damp leather. Covers were tooled with heated metal hand tools and stamps, often onto gold leaf, to produce gilded decoration. Finally, a bolla, or seal of the Doge, was attached to the binding to authenticate the contract within. The quality of binding in Venice increased with the city’s emergence around 1500 as Europe ’s most important center of printing and publishing, and continued to grow in extravagance until the fall of the Republic.

Sixteenth-century commissione bindings are characterized by their refined simplicity. Usually made of dark red or brown leather, their covers were decorated with frames surrounding medallions with the recipient’s name, date of appointment or coat of arms, and the leone in moleca (a frontal winged lion of St. Mark). Towards the end of the 1500s a more lavish style emerged, with irregularly-shaped, sunk panels and arabesque motifs, inspired by painted Islamic bookbindings. Seventeenth-century Venetian binders looked to French bindings and the contemporary fashion for wearing lace, using delicate fan shapes and filigree in their work. In the final decades of the Serenissima, velvet bindings with precious metal ornamentation were replaced by full metal covers with figures in relief.

After the fall of the Republic, many commissioni were broken up for their beautiful illuminated leaves and bindings, which could be sold separately to art lovers and bibliophiles for more money than an intact volume. On display are two pairs of empty covers—probably acquired by Isabella Gardner with their pages already missing—that reflect this regrettable practice.

Illuminating the Serenissima was organized by Anne-Marie Eze, who joined the Isabella Stewart Gardner Museum in May 2010 as the museum’s first Andrew W. Mellon Postdoctoral Curatorial Fellow.

Highlights of the exhibition include:
T.° Ve. Master, Commissione of Doge Francesco Donato to Vincenzo Gritti as Lieutenant of Udine, 1546 • Paint and gold paint on vellum, height 24 cm by width 17 cm by depth 4 cm (closed) • On the illuminated opening page of the commissione are the Virgin and Child, the winged lion of St. Mark, a cartouche inscribed in Latin ‘I, Francesco Donato, by the grace of God, Doge of Venice’, flanked by saints (left) Francis of Assisi receiving the stigmata and (right) Vincent Ferrer holding flames and a book, and two putti raising the arms of the Gritti family, within a border of antique armor and trophies.

This illumination refers to the institutions that governed Venetian life, in order of importance from top to bottom: piety, the state, the doge, and nobility. The Serenissima’s power is conveyed by the military motifs in the border. The male saints are the patrons and namesakes of the doge and Vincenzo Gritti, who received this book for his election as Lieutenant of Undine, a city in northeast Italy . The miniature is by the most skilled and fashionable illuminator of commissioni in sixteenth-century Venice . He takes his name from another illumination with equally graceful figures and luminous bold colors, which is signed ‘T.° Ve. painted this 1528’. The signature, however, was added later as a ploy to attribute the splendid work to the most celebrated painted of the period, Tiziano Vecellio (about 1488-1576), called Titian.

Unknown silversmith, Commissione of Doge Giovanni II Cornaro to Giovanni Bollani as Podestà of Chioggia, 1718 • Repoussé and chased silver covers, silver seal attached by cord and tassel of metallic and red silk thread, and silk spine, height 22 cm by width 18 cm by depth 3.5 cm (closed); circumference of seal is 3.5 cm • On the upper cover, enthroned beneath a canopy, is a female figure of Justice, holding a sword and scales, and wearing a doge’s horned hat. At her feet is a seated winged lion of St. Mark holding an open book inscribed in Latin ‘Peace be with you Mark, my Evangelist,’ and the Bollani family arms. The obverse of the seal shows St. Mark, dressed as a bishop and with an aureola of stars, blessing the doge.

This is a rare example of a commissione with the bolla, or ducal seal, still attached. The subject depicted on the seal emphasized that the doge’s authority was divinely ordained. The cover’s female figure of Justice, holding a sword and scales, and wearing a doge’s horned hat, symbolizes the Venetian government’s charge to preserve peace by means of justice. She reminded the commissione’s recipient, Giovanni Bollani, of his duty to administer justly at Chioggia , an important town at the southern limit of the Venetian lagoon. The covers were decorated using the metalwork techniques of repoussé, hammering the silver from the back to create a design in relief, and chasing, or tooling detail or ornament on the front. The unknown silversmith signed his sumptuous work with the initials AP. 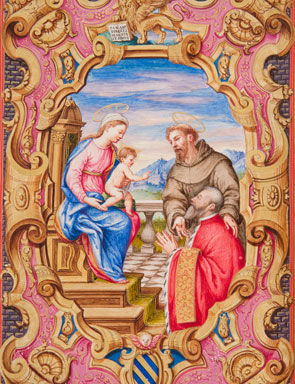 St. Francis of Assisi presenting a Venetian senator to the Virgin and Child