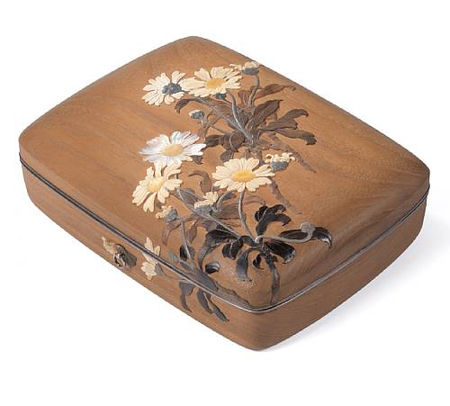 LONDON.- A rare and important early 20th century cosmetic box by Asahi Gyokuzan is one of the highlights of the Fine Japanese Art sale, taking place on the 12th May at Bonhams, New Bond Street.

Asahi Gyokuzan was a designated Imperial Court Artist and one of the most famous and influential carvers in Japan during the Meiji Period (1868-1912).

The cosmetic box made of white paulownia wood, estimated to sell for £200,000 – 250,000, represents the hallmark of the finest Japanese art: the depiction of the transience of nature.

The decoration both on the outside and inside of the box encapsulates the changing seasons. Asahi Gyokuzan deliberately used the medium of a box, since it can be opened and closed, and in doing so creates a series of stories and movement: the stages of the flowering Chrysanthemums representing Autumn, the flying birds on the inside of the box, and the light droplets of water, inlaid in mother-of-pearl.

Furthermore, the basic five elements of nature are represented, the wood of the box itself, the birds that represent the wind, the earth from which the flowers grow, and the water represented by fine drops of water on top of pebbles and the metal used for the handles.

Other highlights of the sale include a rare 18th century finely-inlaid lacquer okimono (anaturalistic animal figure)of an elephant that has been in an English private collection for over a hundred years, estimated at £20,000 – 30,00. The artist Ogawa Haritisu was one of the first artists to incorporate diverse materials into his lacquerwares, including ceramic, metal and shell amongst others.

An English private collection of Japanese fans will also be offered by Bonhams. The exquisite collection includes twenty-five lots, ranging from tanto (dagger) fans that consist of a metal dagger and sheath in the form of a closed fan estimated at £300 -500 to an intricately carved ivory folding fan estimated at £15,000 – 20,000. 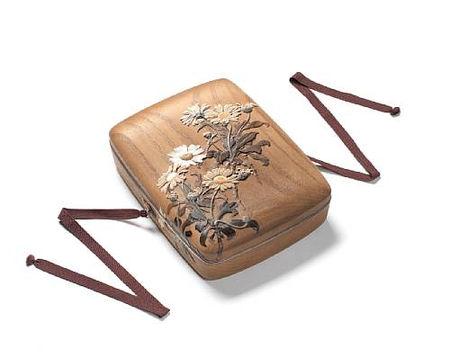 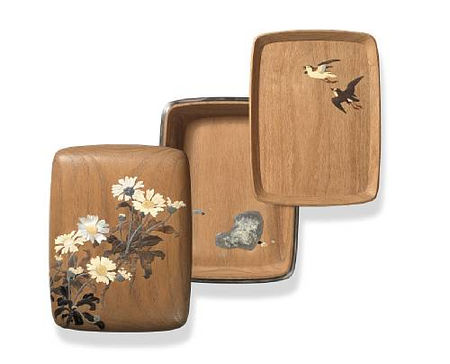 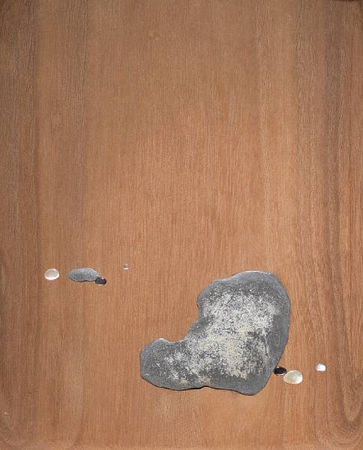 Decorated on the outside with flowering chrysanthemums, arranged in a diagonal composition across the domed cover, with the design of a single stalk continuing down one side, the inside of the cover with one plover in flight, the en-suite, fitted, detachable tray with two plovers in flight, the inside of the box embellished with drops of water inlaid in mother-of-pearl among pebbles, each side also applied with a shell and ring handle, all variously inlaid in wood, mother-of-pearl, pewter and coloured horn, set against the natural unpolished grain of white paulownia wood; the rim of silvered-metal, signed with circular seal Gyokuzan; with double tomobako dated and signed by the artist Meiji yonju-go nen go-gatsu (May in Meiji 45 [1912]), Asahi Gyokuzan saku with seal Gyokuzan. 7cm x 29.5cm x 21.5cm (2¾in x 11 5/8in x 8½in). (4). Estimate: £200,000 - 250,000, JPY 27,000,000 - 34,000,000, $ 330,000 - 410,000

Born in Asakusa, Asahi Gyokuzan together with Ishikawa Komei (1852-1913) were designated Teishitsu gigeiin (Imperial Court Artists) and were two of the most famous and influential carvers in Japan during the Meiji Period (1868-1912). Gyokuzan first trained as a Buddhist priest in the late Edo period, but as a young man Gyokuzan took to a more secular life as a carver. He soon became renowned for his unsettlingly realistic compositions of skulls and skeletons. After becoming a professor at the Tokyo Art School, he later moved to Kyoto. Here Gyokuzan re-established his Buddhist ties, while also mastering techniques of inlay.

A hallmark of the finest Japanese art is the depiction of the magical transience of nature, and this is elegantly and poetically encapsulated in the subject matter of the changing season which is being depicted here. The chrysanthemums, quintessential symbol of Autumn, the coming to the end of the open beauty of Summer's flowering and the beginning of the seasonal change of colours and seeds back to the earth, like the box that can be open with its content showing or closed, holding within it many treasures, only to be opened again for the next cycle.

The chrysanthemums are placed very cleverly to the left and arranged diagonally across the cover, and to the one side using the space not as a flat surface, but as a miniature landscape. The chrysanthemums are designed to face different directions, some flowers facing out, others to the side and more to the back, thus giving the viewer the feeling of depth and space as if inside the box itself. More so, the artist created the flowers in different stages of blooming, so we can find buds appearing and fresh young curling petals; these are made exquisitely with assorted shell and mother of pearl that gives a life-like glow to the flowers.

The box, which is itself a static object, carries the most unusual feeling of movement. The artist deliberately used this medium since a box is to be opened and closed, to create a series of stories and movement of life concealed within: the changing colour of Autumn, the growing plants, the flying birds, and the light droplets of water, inlaid in mother-of-pearl - to contrast its weight and colour - among the pebbles. Furthermore, by virtue of a box's enclosed empty space, the viewer gets a sophisticated design of a three-dimensional object where the clever usage of space is manipulated to include the basic five elements of nature, the WOOD which is the box itself, the birds that represent the WIND, the EARTH from which the flowers grow, and the WATER represented by fine drops of water on top of pebbles (made again with mother-of-pearl) all three symbols of water, and the METAL used for the handles.

The selection of contrasting inlay is also deliberately chosen and is set off most effectively by the natural white paulownia-wood ground, on what is a utilitarian object, resulting in a creation which appeals as much to the recipient's intellect, as it does to the emotions. Furthermore, there is a fine contrast between the empty space and the engraved one, both by the placement of the subjects in their respective spaces, as well as by the virtuoso complex technique of inlay and engraving. There are over five shades of wood for the birds themselves, as well as the leaves and stems of the flowers, the details of which are of all of exceptional quality. At once, evocative, lyrical and dynamic, it is a tour-de-force in design, epitomising the height of craftmanship, representing the best of Japanese art during a period of great changes in this field.
Posté par : Alain Truong à 10:18 - Art du Japon/Japanese Art - Commentaires [0] - Permalien [#]
Tags : Asahi Gyokuzan, shirokiri, tebako