Wanli Blue and White Porcelains at Sotheby's, London, 11 May 2011

Wanli Blue and White Porcelains at Sotheby's, London, 11 May 2011 of almost square section with indented corners, painted in vivid cobalt-blue tones with a lively five-clawed dragon flying amongst flame and cloud scrolls on a raised panel encompassed by a further frieze of four dragons striding amongst clouds and lingzhi sprays at the corners on the rounded sides, repeated on the box, the rims decorated with bands of scrolling lingzhi, the base with a six-character Wanli mark

Note: Compare a related box and cover with a similar design of a dragon, but holding a medallion above its head, published in Jessica Harrison-Hall, Ming Ceramics in the British Museum, London, 2001, pl. 11:129; another sold in these rooms, 13-14th November 1972, lot 373; and a Jiajing mark and period example, included in the exhibition Ming Blue-and-White, Philadelphia Museum, Philadelphia, 1949, cat. no. 111. Wanli boxes of this form decorated with various dragon scenes are known; for example see one with two dragons flanking a central peach tree, sold in our New York rooms, 19th November 1982, lot 246; and another with two dragons in pursuit of a flaming pearl within a shaped panel, in the National Palace Museum, Taipei, illustrated in Blue-and-White Ware of the Ming Dynasty, bk. VI, Hong Kong, 1963, pl. 7.

Boxes of all shapes and sizes were made during the Wanli period, some in specifically conceived shapes such as the long rectangular examples used to hold fans, and others such as the present example which may have been used as a container for a gift of sweetmeats. 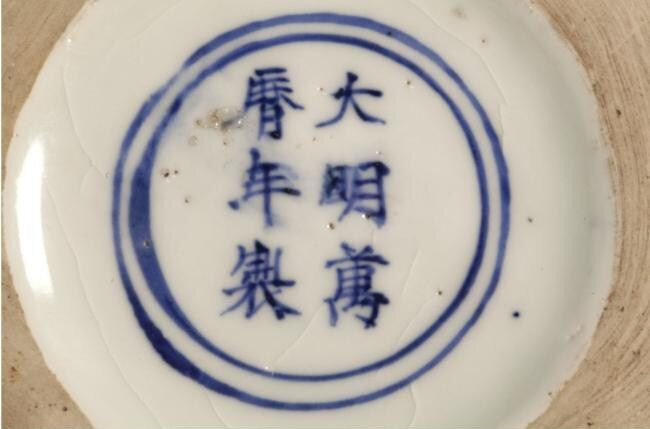 robustly potted in hexafoil section with deep rounded sides rising from a flat base to a broad everted rim, finely painted in bright cobalt-blue tones with a five-clawed dragon and a phoenix amidst stylised ruyi clouds in the centre, the lobed sides divided into six panels each with a dragon and a phoenix in pursuit of a flaming pearl, the rim repeated with the same subject, decorated to the exterior with the bajixiang emblems among floral scrolls below further floral scroll band, the base unglazed with a central circle glazed white and inscribed with the six-character Wanli reign mark in underglaze blue.

Note: Six-lobed basins decorated with a dragon and phoenix in underglaze blue are rare; compare examples adorned with a single dragon amongst floral scrolls, such as one from the Chang Foundation illustrated in Selected Ceramics from Han to Qing Dynasties, Taipei, 1990, pl. 104; and another formerly in the Jingguantang Collection, sold in these rooms, 17th November 1999, lot 746..

Wanli basins of this form and design were also produced in wucai enamels; one is illustrated in Chinese Ceramics in the Idemitsu Collection, Tokyo, 1987, pl. 753; another from Tokyo National Museum is published in Oriental Ceramics. The World's Great Collections, vol. 11, Tokyo, 1982, col. pl. 77; and a third example was sold at Christie's Hong Kong, 29th September 1992, lot 485.

Compare also Wanli basins of this type decorated with various designs, but of pentafoil form; for example one depicting fish amongst reeds is illustrated in Mayuyama. Seventy Years, vol. 1, Tokyo, 1976, pl. 919; another decorated with a mythical beast and other auspicious animals was sold in these rooms, 1st April 1974, lot 204; and a basin painted with a dragon and flower scrolls, was sold several times at auction and most recently in our Hong Kong rooms, 11th April 2008, lot 2936. 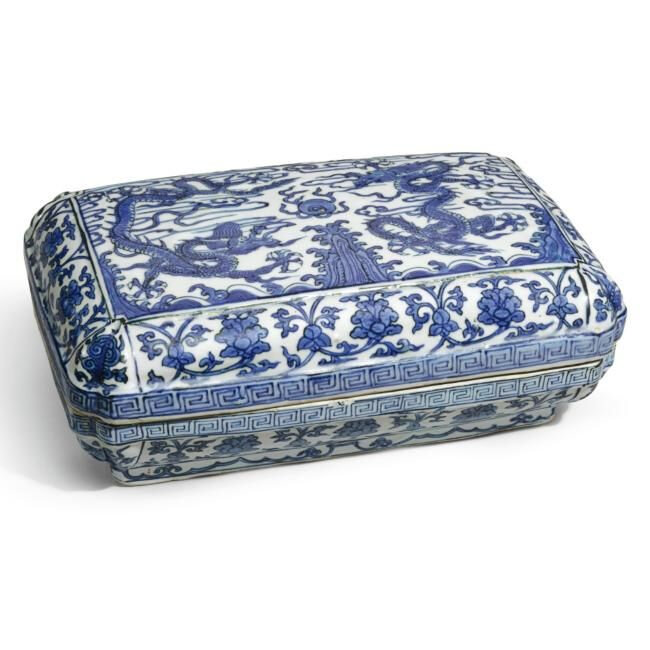 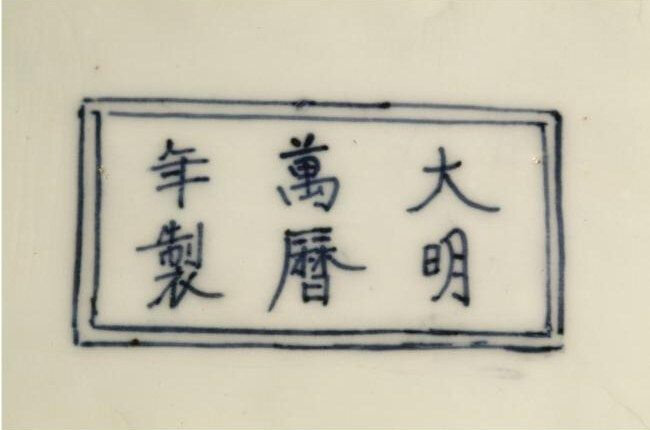 of rectangular form with indented corners supported on a short straight foot, the domed cover painted in brilliant underglaze cobalt-blue with a pair of confronting five-clawed dragons contesting a flaming pearl amid cloud swirls and above foaming waves crashing against rockwork, the sides painted with luxuriant lotus scrolls above a keyfret band, the lower portion similarly decorated with meandering leafy lotus scrolls below a keyfret border, the base inscribed with a six-character Wanli mark within a double rectangle; together with another similar cover. the shallow rounded sides rising from a tapering foot to a flaring rim, painted to the interior in vivid cobalt-blue tones with three separate clusters of lingzhi cloud scrolls within a double circle, later drilled with a fu character, the exterior with a pair of sinuous dragons in pursuit of flaming pearl amid cloud scrolls, inscribed to the base with a six-character Wanli mark within a double circle. the shallow rounded sides rising from a short tapering foot to a flaring everted rim, the interior painted in bright cobalt-blue tones with a butterfly hovering above two qilin amid floral blossom and lingzhi  sprays, all encircled by pairs of fruiting peach sprays, the rim with pavillion and monastery design divided by floral sprays, Buddhist lions and figures under a canopy. the pear-shaped octagonal facetted body rising from a splayed foot to a garlic-knopped neck flanked by two mask handles, the body decorated in bright cobalt tones with different floral sprays within borders on each facet, all below a band of lotus sprays within geometric lappets, the neck with two chilongs  with bifurcated tails against a diaper ground, the garlic mouth with a composite floral scroll below a keyfret border, the foot similarly decorated with a keyfret band above a lappet border