Decorated in a very unusual palette all around the body with three upright clusters respectively of pine, prunus and bamboo, the pine issuing from a pale-green-glazed rock with the tree trunks painted in copper-red and the foliage underglaze-blue, the bamboo all painted in a thick blue possibly enamelled in shallow relief issuing from patches of aubergine and green-glazed terrace, the upright plum tree reserved on a dark blue ground to simulate night-time with a long curling aubergine-glazed trunk and translucent green-glazed blossoms centred with copper-red stamens, all under a translucent pale yellow glaze trickling onto some of the decoration and firing to darker tones in some areas. 41.5cm (16¼in) high. Sold for £36,000 A famille verte biscuit-enamelled incised bowl.. Kangxi six-character mark and of the period

The exterior of the steep rounded sides finely incised with two striding five-clawed dragons in mutual pursuit of flaming pearls, and enamelled in yellow, aubergine, black and shades of green with butterflies in flight and large blossoming branches. 15.3cm (6in) diam. Sold for £9,600

Note: The present bowl belongs to a group of bowls and saucer dishes decorated with dragons in anhua design and enamelled over the glaze, with the two types of decoration showing no awareness of each other's existence. For further examples of this group see one formerly at Bluett's, London, illustrated by S.Jenyns, Later Chinese Porcelain, London, 1977, pl.XXXV(1). Densely painted at the centre in pale shades of green, aubergine, sepia and blue with two kneeling supplicants before a seated dignitary flanked by three officials, all on a pavilion terrace set with a large screen and two tables. 26.7cm (10½in) diam. Sold for £7,800 Boldly and brightly enamelled across the centre with warriors on horseback and on foot fighting with lances and a sword on a rocky terrace. 34.5cm (13½in) diam. Sold for £7,200 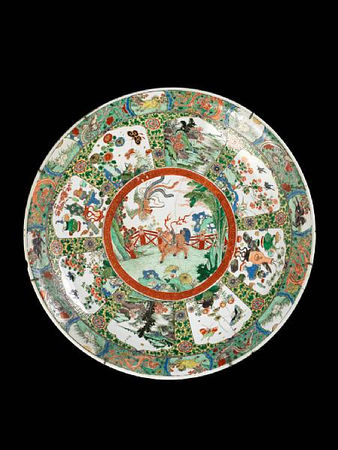 Brightly enamelled with a central roundel of a qilin grimacing at a flying phoenix above it on a plantain terrace, within eight radiating fan-shaped panels variously depicting vases of flowers, clusters of shrubs and riverscapes, beneath eight panels of single animals on the green-ground rim. 56cm (22in) diam. Sold for £4,200. Boldly enamelled across the centre with a long-tailed exotic bird perched on green rockwork amongst iron-red and yellow tree peony, beneath a flowering magnolia branch. 34cm (13½in) diam. Sold for £3,360