the cup with deep rounded sides rising from a short foot, the cupstand with a small deep cup resting on a broad gallery flaring up slightly, all supported on a high unglazed foot, both covered in a pale sky blue glaze liberally splashed with pale purple. the deep conical sides rising from a small foot to a slightly flaring rim, covered with a lustrous black glaze thinning to a metallic-blue tone at the crisply cut light-brown rim, the black glaze extending and pooling down the underside, stopping short of the foot to reveal the pale stoneware body. the rounded body shaped into eight lobes rising from a short foot to a tall cylindrical neck, the angled shoulders set with a strap handle and a cylindrical spout issuing from a dragon head, covered overall in an ivory glaze infused with a subtle network of golden brown crack. comprising three boys, one depicted with a lock of hair on his forehead lying recumbent on his front, the other seated with two arms holding his raised right leg and the third seated with hands held up to his mouth in a manner of shouting; and two dogs, each lying recumbent with one hind limb raised and tail curled around its rear haunches, its front paws folded to its chest, all covered with a transparent bluish glaze, the bases left unglazed. 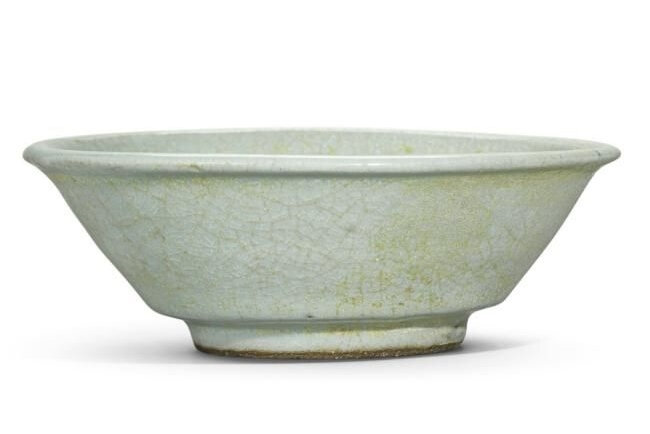 the flaring sides rising from a short foot to a spreading lipped rim, covered overall with bluish-green crackled glaze.