NEW YORK, NY.- Christie’s announces its upcoming auction of Old Master Paintings on June 8, 2011 at 10 am, featuring a selection of works by the great French, Italian, Flemish and British masters of the 15th through the 19th century including Pieter Breughel II, Jean-Honoré Fragonard, and Sir Joshua Reynolds, among others. This dedicated sale of Old Master Paintings – the first at Christie’s New York since early 2008 – offers collectors and dealers the opportunity to acquire important examples of European Art at very approachable price levels. Estimates begin at $3,000 and range upwards to $600,000 for the most significant offerings. The sale is expected to achieve in excess of $5 million.

The cover lot of the sale is a masterpiece portrayal of Saint Mary Magdalene by the anonymous 16th century artist referred to as the Master of the Parrot (estimate: $600,000-800,000). This richly-hued painting of a beautiful young Mary Magdalene portrays her in a flowing velvet gown and enveloped in a tasseled cloth of honor held aloft by two putti. In her hands she holds a richly ornamented jar – a reference to her anointing of Christ’s feet.

Though little is known of the Master of the Parrot, who was active in Antwerp between 1525 and 1550, it is believed he began his career in the workshop of the great 16th century Netherlandish master Pieter Coecke. Scholars believe the Master of the Parrot’s distinctive style was further inspired by the Italianate artists working in the region, and Saint Mary Madgalene clearly reveals the influence of the great master Leonardo da Vinci, particularly in the striking chiaroscuro modeling of his subject’s pensive, alabaster-skinned face. Offered from a private collection, this remarkable painting has previously been exhibited at Washington, D.C.’s Corcoran Gallery, and at London’s Royal Academy as part of an exhibition devoted to Flemish and Belgian art.

Additional highlights of the Old Master Paintings sale include: Dating from the end of Berchem’s career, this large-scale painting is a rare example of a historical subject by an artist known for his bucolic Italianate landscapes and sensitive portraiture. This highly-charged sweeping scene depicts the Battle of Hydapses, the historic vanquishing of India’s King Porus by Alexander the Great in 326 B.C. This large scale oil – measuring nearly five feet in width – is one of the very few surviving military genre paintings by Berchem left in private hands. His historic accounting of The Israelites capture of Judea is in the collection of the Dunkirk Museum. One of Fragonard’s relatively rare portraits, this work has long been held to portray one of the three Colombe sisters, the lovely and notorious Venetian-
born stars of the Comédie Italienne. It has been proposed that the adolescent beauty depicted here -- painted in Fragonard’s sophisticated palette of silver, pearl and gray -- is most likely Marie-Thérèse, who would have been 16 years old in 1770, the presumed date of the work. 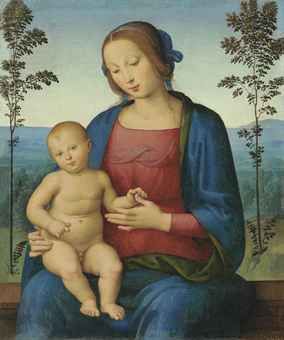 Formerly known as the “Aldenham Perugino” due to its early provenance in the important collection of Baron Henry Huck Gibbs, this private devotional panel has been reattributed to the Spanish-born master Giovanni di Pietro and is now acknowledged as one of his finest works. Details such as the boldly arched eyebrows and bee-stung lips of the Madonna’s face are characteristic of other works by this master, including his Madonna and Child in the State Hermitage Museum, St. Petersburg. The subject of this portrait, Richard Bache, married Benjamin Franklin’s only daughter, Sarah, and succeeded his father-in-law as Postmaster-General of the American colonies. The work was painted during a trip to England that the couple took in 1792-93 and has remained in the possession of descendants of Benjamin Franklin ever since. Hoppner’s companion portrait of Sarah Franklin Bache is in the collection of The Metropolitan Museum of Art. This towering, full-length portrait of the Emperor Napoleon Bonaparte by Dufay depicts the young ruler in classic contrappasto pose, his sumptuous coronation robes flowing behind him. A step-brother to the famous adventurer and memoirist Giacomo Casanova, and the battle painter François-Joseph Casanova, Dufay was a pupil of the great master Jacques-Louis David and a favorite of Napoleon’s Director-General of Museums, Dominique Vivant Denon. Most of Dufay’s works were produced under the patronage of Denon, including his most famous painting, the Marriage Banquet of Napoleon and Marie-Luisa now at the Château de Fontainbleau.

*Estimates do not include buyer’s premium.