Superbly carved in deep relief to depict a scene from 'Ode to the Red Cliff', depicting Su Dongpo accompanied by two other figures seated on a raft on a fast-flowing river, all below large, cragged rock faces, a cascading waterfall and over-hanging pine and wutong trees, with a scholar and attendant seated on the riverbank, a large gnarled pine tree forming the openwork handle, the horn of a warm honey tone, carved wood stand.

Provenance:  Old English family collection, acquired in the 19th century, and thence by descent to the current owner

Note: The subject matter of 'The Ode to the Red Cliff', the famous poem by the Song dynasty painter Su Shi, was reserved for some of the finest rhinoceros horn libation cups of the late Ming / early Qing dynasty. For an example of similar high quality in the Metropolitan Museum of Art, New York, donated by J. Pierpont Morgan, see Jan Chapman, The Art of Rhinoceros Horn Carving in China, London, 1999, pg. 210, pl. 289. 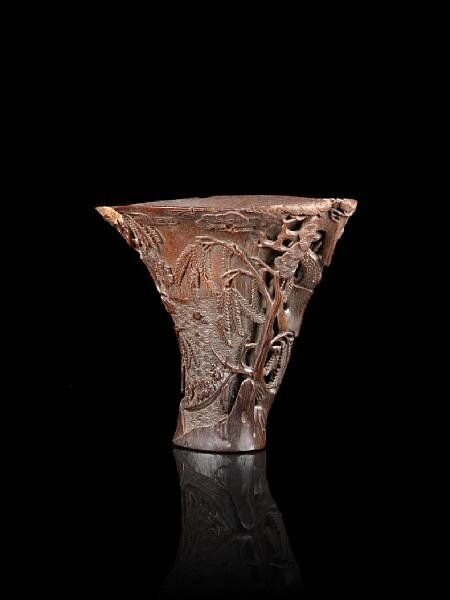 Superbly carved in deep relief to depict a scene from 'Ode to the Red Cliff', showing two figures and their attendants seated on a raft on a fast-flowing river, with further figures observing and engaged in various pursuits on the riverbanks, all amidst large over-hanging willow and prunus trees, a large gnarled pine tree forming the openwork handle, a rock face inscribed with a fourteen-character poem, the horn of a dark chocolate brown tone, carved wood stand.

Provenance來源:  Old English family collection, acquired in the 19th century, and thence by descent to the current owner The sumptuous cup sensitively carved with full naturalistic attention to detail, with lobes emanating from the rim and extending inside, the exterior boldly carved inverying levels of relief with peony, plum blossom and other flowers depicted in luxuriant stages of growth, issuing from long coiling stems depicted intertwined with each other, the horn of a rich brown tone with a tinge of orange. Of deep rounded form supported on a pronounced splayed foot, incised around the exterior with an Islamic invocation.

Note: Vessels carved from rhinoceros horn are much rarer than more commonly found libation cups which follow the natural form of the horn, and are likely to have been expensive commissions. For an almost identical rhinoceros horn stemcup, incised with a Tianqi reign mark, see an example sold at Sotheby's New York, 23 September 1995, lot 298, and again, 19 March 2007, lot 385.

This translates as:
'In the name of God the compassionate the merciful
Their Lord has given them pure wine to drink.'

The source of the quotation is Qur'an Sura 76. The first element of the inscription ('In the name of God . . . ') is the invocation that appears at the head of each sura of the Qur'an.
Bonhams. FINE CHINESE ART, Hong Kong, Island Shangri-La Hotel, 25 May 2011 to 26 May 2011
Posté par : Alain Truong à 21:45 - Chine, Objets de lettrés / Treasures of the Chinese Scholar - Commentaires [0] - Permalien [#]
Tags : 'Ode to the Red Cliff', Arabic-inscribed, libation cup, Ming Dynasty, rhinoceros horn, stemcup