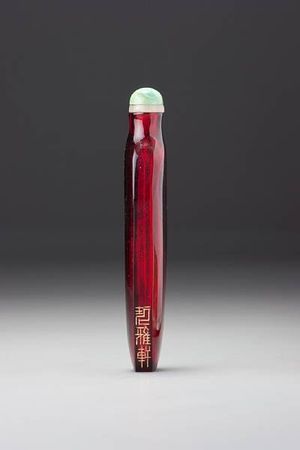 Transparent ruby-red glass with a few air bubbles of different sizes, some of oval form, and gold pigment; with a concave lip and flat, bulging rectangular foot; engraved low on one side in seal script, Wanya xuan ('Studio for Appreciating the Elegant'), the mark filled with gold pigment. Height: 8 cm. Mouth/lip: 0.56/1.10 cm. Stopper: turquoise; nephrite collar. Sold for HK $66,000

Condition: tiny chip partly polished out on one edge of the foot; otherwise, workshop condition

Commentary: The group of monochrome glass bottles bearing the Wanya xuan hall mark is among the most fascinating and mysterious of all groups of glass bottles. We know that an example in the J & J Collection, to which a scholar has added engraved decoration, cannot have been made later than 1795 (the date of the scholar's death) and might have been decorated as early as 1765. We also know that there is an imperial connection, for yellow glass is among the colours used, and on any bottle made so early use of the imperial colour would have been significant. The group, with many others cited, is discussed in Moss, Graham, and Tsang 1993, under no. 337.
Bolstering the imperial connection is the use of ruby-red glass derived from gold. This recipe may have been a closely guarded secret at the imperial glassworks during the early phase of glass production. If the link were not to the emperor himself, then the mystery patron who produced this series of snuff bottles (but, strangely, no other vessels bearing the mark) may have had imperial connections. One authority has suggested that they may be the products of Yinti at his private glassworks in Beijing (Curtis 1995, p. xxi). Yinti (1672-1734), who was until his disgrace in 1708 the heir designate to the Kangxi emperor, set up his own glassworks at his palace outside the Forbidden City, the Xiang'an gong. We know that he produced excellent glass that was presented to the glass-loving emperor regularly, other of his wares also being highly valued among the influential minority, so this theory remains a possibility. The most significant fact about the prince's activities in the glassmaking field, however, is that they happened at all. Setting up a glassworks is not a difficult matter, and if Yinti had a private glassworks it is possible that other princes or high officials did, too. This would create the conditions necessary for a group such as this one, which are early, have an imperial connection, and are marked with the name of a private residence. The absence of records in this context is not surprising, for we know of Prince Yinti's activities only through a casual mention by a Jesuit missionary, Antoine Gaubil, writing to his masters in Europe in 1738 some years after the prince died. No records of Yinti's glassworks have yet come to light from the Chinese side.

We know from Treasury 5, no. 804, bearing an authentic Yongzheng mark, that ruby-glass at this time was prone to be swirled, flawed, and bubble-suffused. The same may have been true of the Kangxi period. We do not know whether a problem afflicting the imperial glassworks would necessarily have plagued a private, princely glassworks, but it is likely that the same expertise and technology would have been made available to Yinti, who was close to the Jesuits. Among the ruby-glass examples bearing the Wanya xuan mark, several, such as this one, are of excellent quality, while others, such as Treasury 5, no. 753, are less pure. The latter is also considerably more convincingly worn than most.

We noted the elegance of the J & J example in ruby-red glass (no. 337) because it was taller and thinner than the typical shape. This one, taller yet by more than a centimetre, is—unusually--waisted in the main profile, giving it an even more distinctive appearance among bottles of the group. In discussing the state of perfection of many in this group, it is worth bearing in mind that they may have been repolished more than once over the centuries. Such is the case with this one, and considerable wear is visible beneath the recently polished surface that is, itself, beginning to accumulate a new layer of scratch-marks, suggesting the polishing was not carried out recently.
As usual, the mark is inscribed low on one narrow side, which has been faceted by the lapidary after the bottle was blown. It is in the usual seal script with the standard formalization for the characters and is filled with gold pigment that, in this case as in so many, has probably been re-gilt recently.