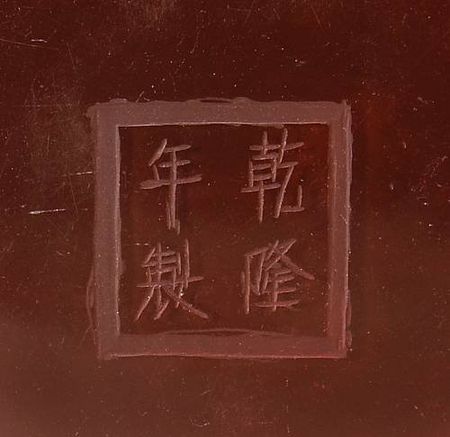 Of cylindrical section rising to a narrow waisted everted lip, the thin translucent walls carved in raised relief with an elegantly rendered blooming mallow plant, the base bearing the incised four-character mark within a square border; 3 1/8in (8cm) diameter. Estimate: US$3,000 - 5,000

Note: The mallow flower has been a popular subject for glass blowers since the mid-Qing era. For its use in snuff bottle decoration, see Bonhams, New York, March 24, 2010, the Collection of Margaret Polak, lots 108-112. Each ovoid body rising from a circular footrim and tapering inward to a high shoulder and short narrow neck, the cranberry red glass carved away from the snowflake ground to depict three beauties enjoying a garden, one holding a scroll, one strolling with a fan, and one playing the xiao, the lush surroundings harboring magpies and prunus, blooming mallow flowers, and a sturdy pine sheltering a pavilion and tree peony above rocky outcroppings, the vibrant scene enclosed by plain bands at the foot and shoulder, each domed cover surmounted by a floral finial, 12in (30.5cm) high. Estimate: US$2,000 - 3,000 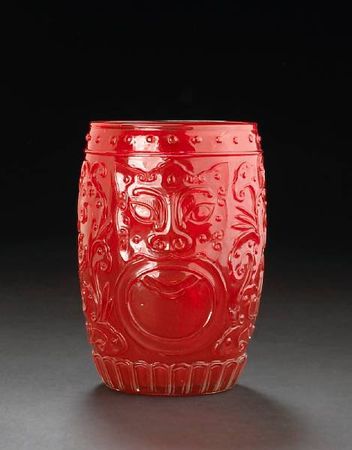 Fashioned in the form of a garden stool, the thin, translucent walls carved in high relief with exotic split-tailed dragon and phoenix birds set off by fierce taotie masks enclosed by a row of raised bosses and a band of stiff lappets above a recessed base and narrow footrim. 4in (10cm) high.. Estimate: US$2,000 - 3,000
Provenance: S. Bernstein & Co., April 9th, 1992 A turquoise glass bowl. Republic Period. Photo Bonhams
Fashioned as a lotus leaf tapering outward to an elegantly everted petallate rim, the exterior walls naturalistically carved in relief with the leaves, blossoms, pods, and stems forming a crown incorporated into the raised foot and surrounding the large characters he hua (lotus)., 7 1/4in (18.5cm) diameter. Estimate: US$2,000 - 3,000
Provenance: Purchased Ashkenazie and Company, San Francisco, June 18th, 1990. Published in 'A Chorus of Color: Chinese Glass from Three American Collections' (Asian Art Museum of San Francisco, 1995) as no. 101, page 124. 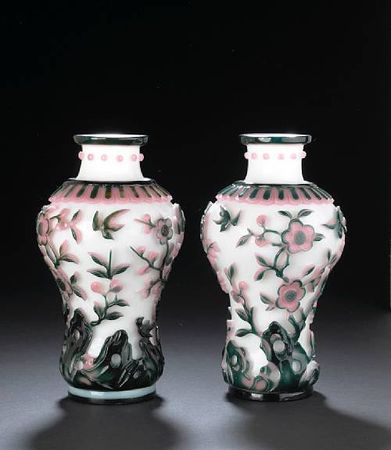 A pair of two-color overlay glass vases. Photo Bonhams
Of meiping form, with pink and green glass layers expertly carved away from the opaque white ground to reveal a detailed tableau of prunus issuing from rocky outcroppings and magpies hovering above, the verdant scene set under a band of stylized lappets at the shoulder and raised pink bosses under the banded neck; 7in (18cm) high. Estimate: US$2,000 - 3,000
Provenance/ / Ashkenazie and Company, San Francisco
November 21st, 1990 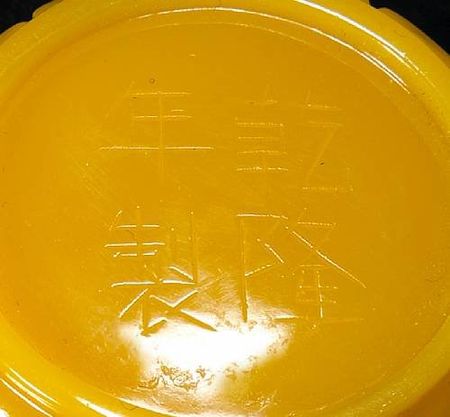