A pair of Spanish ormolu-mounted tortoiseshell, ebony and ebonished cabinets-on-stands

A pair of Spanish ormolu-mounted tortoiseshell, ebony and ebonished cabinets-on-stands 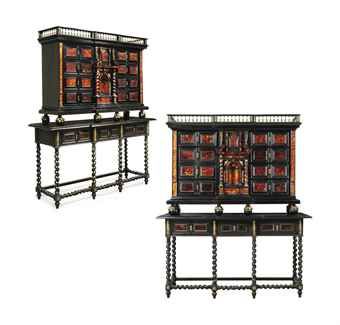 Notes: The cabinet on stand, with all its many variations became fashionable throughout Europe from the early 16th century, until falling from favor during the middle decades of the 18th century; there were many regional variations, such as the related ebony cabinets with their bas-relief panels being produced in Paris or the examples being produced at Florence with exuberant pietra dure panels from the Medici workshops, however the design of the present lot with its rich ormolu mounts and tortoiseshell veneers set in a ebony ripple-moulded frame is typical of the work being produced not only in Spain but elsewhere in the Spanish empire at Naples and Antwerp during the 17th Century. This design of cabinet came to favor in Spain in the mid-17th century with the steady flow of fashions and émigré craftsmen from Germany and the low countries, and gradually superseded the earlier and more specifically Spanish form of cabinet on stand the vargueño.
A related Spanish cabinet on stand is illustrated and discussed, Helena Hayward ed., World Furniture, Feltham, 1965, p.103, fig. 358, a further related cabinet was sold, European Noble and Private collections, Christie's Amsterdam, 14-16 February 2006, lot 23.