Standing under the patronage of the German Minister of Education, Dr. Annette Schavan, about 100 religious and secular mosaics, mosaic fragments and mosaic designs can be seen from 16.7. to 9.10.2011 in the Municipal Art Gallery of Ueberlingen: Covering a time span of 1500 years, the exhibits give insights in the art-historical and historico-cultural development of the mosaic from early Christianity to the beginnings of Modernism. At the same time they show different techniques – the classical mosaic consisting of small rectangular pieces which is usual since antiquity, the micromosaic of small cut glass fibres which was developed in Rome in the late 18th century as well as the special form of Florentine mosaic of exactly cut natural stones which fit together perfectly.

From Rome, 24 mosaics will come to Lake Constance, covering the period from early Christianity to the 19th century; lenders are St Peter’s Basilica and its treasury as well as the Vatican Museums, the National Gallery Villa Borghese and the Museo Napoleonico. Outstanding exhibits are an early Christian mosaic of St Peter (about 440/450) and further medieval mosaics, some of which are presented to the global public for the first time, as well as jewellery of the decades around 1800, decorated with micromosaics, among them Antonio Aguatti’s jewellery set of the Queen of Naples, Caroline Bonaparte.

14 works from the 16th to the 18th century, produced in pietra dura technique ("Florentine mosaic"), some of which formerly belonged to the Medici, will be seen. They will come from Florentine museums. Amongst them are famous works like the portrait of the Tuscan Grand Duke Cosimo I, which was created by Francesco Ferrucci around 1598, as well as the chess board, created after a draft of Jacopo Ligozzi in 1619.

The Victoria & Albert Museum of London is represented with 14 prominent and partly monumental loans, St Paul’s Cathedral with 10, including the large-sized mosaic designs that were created for the quire of the London cathedral. Cologne Cathedral lends Ueberlingen 6 designs of the church’s mosaic decor from the 19th century. Further loans come from Berlin, amongst others.

The exhibition takes place in cooperation with the Studio del Mosaico of the Fabbrica di San Pietro, Rome (Vatican) and the Museo dell’Opificio delle Pietre Dure (Florence). As guest curator Ottobrina Voccoli could be won, who gained her doctorate on the European history of mosaics. The classical technique of the Renaissance mosaics is for example represented by the “Portrait of Pietro Bembo” from 1542. Valerio Zuccato, one of the most prominent mosaic artists at the San Marco Basilica in Venice, created the exceptionally pictorial portrait of the Venetian cardinal and scholar Pietro Bembo (1470-1547), after a design of Titian. 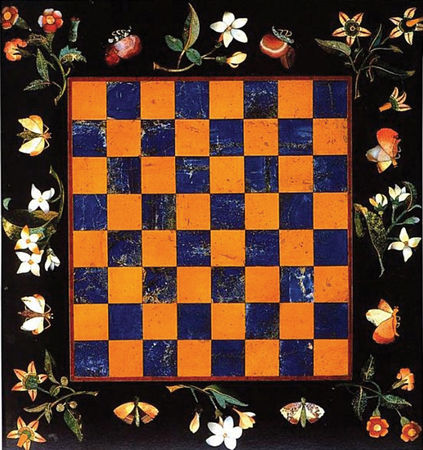 Amongst the “Florentine mosaics” the famous "Chess board" is on show, which Giovan Battista Sassi has mosaicked after a draft by Jacopo Ligozzi in 1619. A further highlight in this section is the precious portrait of the Tuscan Grand Duke Cosimo I de’ Medici, which was created by the lapidary Francesco Ferrucci about 1598. Being produced in pietra dura technique, this mosaic was designed for a privileged place in the Medicean “Chapel of the Princes” of the church of San Lorenzo, one of the most magnificent chapels of Florence. With his pictorial mosaics and his technical mastery, Marcello Provenzale, who worked in Rome at the beginning of the 17th century, gave direction to the mosaic arts of the modern times. He is present in the exhibition with his famous mosaic “Owl and Other Birds” from 1615, which was a gift from the influential connoisseur Cardinal Scipione Borghese to the Tuscan Grand Duke Ferdinando II de’ Medici. 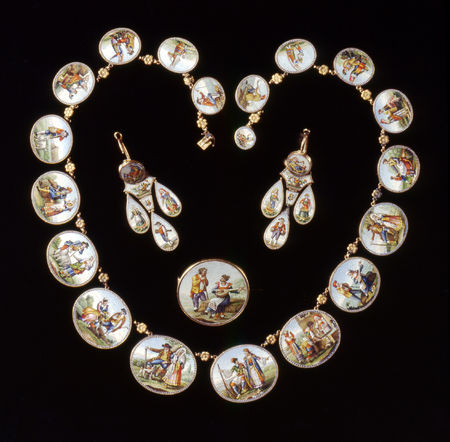 In the late 18th century, Giacomo Raffaelli and Antonio Aguatti developed the so-called “micromosaics” whose small stones are obtained from cut glass fibres. They decorated especially small objects like (snuff) boxes and jewellery, desired by cultural tourists in Rome and by upper-class ladies. One of the outstanding objects of the exhibition is the “Parure”, a jewelry set which was created by Aguatti for Caroline Bonaparte, Queen of Naples, sister of Napoleon I and wife of Joachim Murat. This set consists of a necklace, a brooch and eardrops, which are precisely mosaicked with scenes of the public life. In the 19th century, outstanding religious and secular buildings all over the world were decorated with monumental mosaics. Here, both the application of historical styles as well as the use of actual styles can be found. The exhibition presents the diversity of the possibilities amongst others exemplarily by mosaic-designs for Cologne Cathedral and for St Paul’s Cathedral in London. William Blake Richmond, whose mosaics, which are influenced by the Arts & Crafts Movement and Art Nouveau, decorate the quire of St Paul’s, is represented by the large-sized mosaic-design of the prophet David, for example.