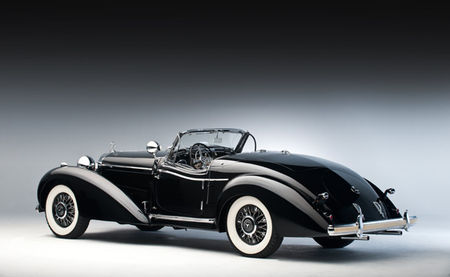 Mercedes-Benz’s success with the 500 K, aided by the continuing defaults of its sporting luxury competitors as the Great Depression worked its way through society, politics, royalty and finance, encouraged the introduction in 1936 of the 540 K. Regarded by many, and respected by all, as the high point of the Classic Era’s great chassis, engine and coachwork combinations, the Mercedes-Benz 540 K reflected the restless pursuit of perfection by Mercedes-Benz engineers, technicians and craftsmen and by the coachbuilders of Sindelfingen.

While the concept changed little, the execution became steadily more refined. By the time this magnificent Spezial Roadster was built in 1939, there were few remaining competitors to Mercedes-Benz for the mantle of premier luxury-performance automobile manufacturer.

Its Grand Prix cars were consistently challenged only by Auto Union, while Rolls-Royce, Delage, Talbot-Lago, Delahaye, Bugatti and Cadillac all offered cars perfectly suitable for cruising the French grandes routes and the boulevards of the Riviera and Santa Monica. Bugatti and Alfa Romeo both offered comparable automobiles in concept, technical intrigue and daring design. But ultimately, none matched the quality and distinctive design, let alone the impressive performance, of the Mercedes-Benz 540 K with its supercharger engaged while its privileged passengers were cosseted in rich, luxurious surroundings.

Each 540 K commanded the best of Mercedes-Benz’s resources, and each was individually constructed to the finest German standards, using only the most enduring materials and the finest craftsmen drawn from Daimler-Benz’s thousands of employees. Remarkably, at a time when most luxury automobiles were supplied as rolling chassis to coachbuilders of their new owners’ choice, Mercedes-Benz created almost all the body designs for its premier models in-house and built them in the extensive facilities at the Sindelfingen Werk. Under the guidance of Wilhelm Haspel (who would go on to be Chairman of the Daimler-Benz management board from 1942-1952) and designer Hermann Ahrens, Sindelfingen became both a highly efficient facility for production bodywork and the source of some of the most elegant, sporting and finely crafted limited production coachwork ever created.

The ultimate Mercedes-Benz 540 K was the Spezial Roadster. Exceptional at the time, the 540 K Spezial Roadster has subsequently firmly established itself at the pinnacle of classic cars. Priced at 28,000 Reichsmarks, about $12,000 in Germany at the prevailing exchange rate, the New York importer Mitropa Motors asked $14,000 landed in the US – about 40 % more than the most expensive catalog-bodied Cadillac V-16. The 540 K Spezial Roadster is an awe-inspiring blend of size, performance and style, possessed of a commanding presence that is palpable in any surrounding.

Constructed on a nearly 130-inch wheelbase chassis and stretching fully 17½ feet overall, the Spezial Roadster effectively accommodates only two passengers. Yet, Hermann Ahrens and the Sindelfingen designers succeeded in so skillfully blending its elements that its proportions are harmonious. One of the Spezial Roadster’s defining characteristics is the gently sloping Mercedes-Benz radiator that is tucked back behind the front wheels’ centerline between sweeping front fenders. Subtle bright accents complement and outline the form of the body elements, punctuated by functional and stylish details that draw the eye and mitigate the effect of the car’s size. Two massive exhaust pipes emerge from the hood’s right side and disappear into the fender.

The Spezial Roadster’s imposing presence is matched by its impressive performance. The stiff frame and fully independent suspension support its two-ton mass effortlessly, soaking up irregularities in byways and at its best showing the 540 K’s relaxed 85 mph cruising speed on the Autobahn. Mercedes-Benz fitted a camber compensator spring to the 540 K to offset the swing axle independent rear suspension’s tendency to sudden camber changes, and the resulting driving experience is balanced and satisfying. This is no sports car, but for two people to cover vast distances of good highways in comfort, it is nearly unmatched.

Of the 419 examples built during the 540 K’s production life from 1936-1939, the most dominant were the Spezial Roadsters designed and executed to the highest standards in Mercedes-Benz’s own karosserie in Sindelfingen. Only 25 540 K Spezial Roadsters were built.

This example, chassis number 408383, has both unusual attributes and a fascinating history. It was completed in early August 1939. As a late 540 K it had the five-speed transmission with overdrive fifth speed which Mercedes-Benz introduced in 1939. Its first owners were the Horn brothers, proprietors of an exclusive boutique in Berlin. As World War II escalated it went into hibernation, having covered minimal mileage.

Its design is unique among even the highly specialized and individual 540 K Spezial Roadsters. It is believed that Rolf Horn, one of the brothers, had a major influence on its conception and design, a role entirely consistent with Sindelfingen Sonderwagen’s function as custom coachworks to the elite and privileged.

The Horn brothers’ 1939 Mercedes-Benz 540 K Spezial Roadster retains the traditional chassis layout with the raked vee-shaped radiator set back between the front fenders, long hood and cut-down doors. Beyond that, however, it presents a much different visage. The front and rear fenders are a near teardrop shape and fully skirted. The sweeping running boards characteristic of earlier spezial roadsters have been eliminated in favor of small frame covers.
The low doors have rollup windows and rise abruptly past the rear hinged doors to a hard boot cover over the folded top, giving the rear deck a smooth, aerodynamic surface and taper. The windshield is one piece but sharply raked in line with the cowl with large wind wings on each side. It opens from the bottom for ventilation and has blue-tinted glass sun-visors. A slim chrome beltline accent traces the hood break then sweeps downward, paralleling the door tops before tapering to a fine termination at the rear fenders.

Liveried in black with black leather upholstery and top, the chassis is unadorned by chrome and essentially hidden below the body and fenders. Even the 540 K’s outside exhaust head-pipes subtly drop into the right front teardrop fender almost out of sight and only emerge as two small tailpipes under the rear bumper. Black hub and rim wire wheels with bright spokes and Mercedes-Benz’s signature wheel balancing weights accent wide whitewall tires.
Accessories are few: just a combination spotlight and rear-view mirror for the driver, a Telefunken radio with German city bands marked on its dial with its antenna subtly placed behind the driver’s door and a pair of trafficator turn indicators on the cowl.

The profile of this 1939 540 K foreshadows Hermann Ahrens’ design for the postwar Mercedes-Benz 300, a rare transition piece connecting classic Thirties Mercedes-Benz Sindelfingen design and generations of Mercedes-Benzes to come.

The car’s immediate postwar history is not known with certainly, but in 1967 it was discovered in the Soviet Union by Alf Johansson. Mr. Johansson’s acquisition of the car is detailed in the book European Classic Cars: The Survivors Series by Henry Rasmussen. The book details his two-year quest to see the car in the suburbs of Moscow, as it had reportedly been stored at a Soviet general’s summer house. Although the general had since passed away, Alf made contact with his son, from whom the car was eventually acquired after two months’ persistence. Equally challenging was the car’s exportation to Sweden from Soviet-era Russia, even though Alf now owned the car. He persisted with help from various contacts and even his colleagues at Moscow Radio. Ultimately, in a daring show of bravado, he simply drove it over the border as a tourist and onto Finland, thereby preserving a very valuable piece of Mercedes-Benz history.

A few years later it was restored and then sold to Thomas W. Barrett III in 1977. Today it is offered from the Lyon Family Collection, wherein it has been treated to regular maintenance by professionals.

In preparation for its offering at auction in Monterey, 408383 was inspected personally in California by two veteran experts from Mercedes-Benz Classic Germany. Their impressions were very positive, as they concluded in their expert opinion that this car is a matching-numbers example. Finished in its correct original color of black, the engine is original to the chassis and retains the original number plate. The transmission is of the correct series, as is the steering box, and all correct stampings were found throughout, including on the bodywork. The body number was found on numerous parts, further corroborating the car’s originality. All in all, the car is composed of very original components, the way it left the factory.

1939 Mercedes-Benz 540 K Spezial Roadster s/n 408383 is a superbly maintained example of the most rare and desirable of all Mercedes-Benz 540 K Spezial Roadsters. Its design, with teardrop fenders, no running boards, hidden spares and gracefully tapered rear deck, is a choice transition between classic Mercedes-Benz 540 K design by Hermann Ahrens and the Sindelfingen coachworks and the more modern, elegant and streamlined concepts of the Fifties. It has the rare five-speed overdrive transmission. It abounds in exceptional details and is beautifully presented in its all-black livery that highlights the body’s unique configuration.

“Unique” is an overworked and sometimes inappropriately applied adjective, but it is very appropriate when applied to this singular, beautiful Mercedes-Benz 540 K Spezial Roadster.