NEW YORK, N.Y.- On September 13, the afternoon will be devoted to the classical works of Indian and Southeast Asian Art. Christie’s will offer an extensive selection of over 200 lots of sculpture, paintings, ritual objects, and works of art from India, Tibet, Nepal and Southeast Asia. Several notable collections will also be featured in the sale, including The Burkhart Collection, as well as Property from the Dr. David Nalin Collection, which has a large focus on stone and stucco sculpture from the Gandharan region.

Highlighting the sale of Indian & Southeast Asian Art is Seated in dhyanasana on a double-lotus base with beaded rims, his hands in the earth touching mudra, the folds of his sheer sanghati draped over the shoulder and gathered at the elbow and under the ankles, the face serene with bow-shaped mouth, heavy-lidded elongated eyes, and raised urna, flanked by pendant pierced earlobes, the hair in tight curls over the ushnisha and capped with a pointed knop; 23½ in. (59.7 cm.) high

The sale presents The Burkhart Collection, a selection of more than 30 quality works from a notable collector. Hanspeter Burkhart, a successful Swiss lawyer by profession began collecting Tibetan art from the mid 1980s. His collection focuses on images of Tara among others and includes Seated in lalitasana on a double-lotus base with her pendant leg resting on an extended lotus blossom, her hands in vitarkamudra, clad in a dhoti secured with an elaborate belt with a sash draped over her left arm, adorned in various jewelry and flanked by lotus blossoms at her shoulders, the face with urna inlaid with hardstone surmounted by a foliate tiara, the base sealed; 8 in. (20.3 cm) high

Provenance: Acquired in Zurich, before 2000

Notes: Regarded as the female boddhisatva, Tara is one of the most widely worshipped female figures of Buddhism - a savior-goddess who is revered for the protection and guidance she offers on the path toward enlightenment. Tara exists in 21 forms, each representing specific qualities or actions, with the Green Tara, being one of the more commonly depicted, associated with protection from fear.

As a teenager Hanspeter Burkhart was captivated by Rudyard Kipling's novel "Kim", where his fascination for Asia and Buddhist philosophy began. A successful Swiss lawyer by profession, he began to collect Tibetan art from the mid 1980s. Images of Tara held a particular appeal, he enjoyed the variations on a theme, the fine detail and execution, pieces that could be fondled, their beauty and feeling. This also led to a friendship with Berti Aschmann as a leading advisor and collector in the field. With her collection now at the Rietberg Museum in Zurich, he realized that every collector must also be able to let go. From his new base in Thailand, where Buddhist art is also considered something to share, he is happy to see the pieces he has loved and cherished pass on into other hands and enrich the life of someone new. Standing in slight tribangha on a lotus base over a square plinth, with his hands folded before his chest and cupping a ball of flowers, clad in a short dhoti and adorned with beaded jewelry, his face with serene expression, large almond-shaped eyes and pointed nose; 22¾ in. (57.8 cm.) high.

Notes: The Shaiva saints of which there is a group of sixty three, are known as nayanmars or leaders. They were part of a community of holy persons traveling the countryside, stopping at temples a long the way to sing the glories of the enshrined deity. Their hymns form the sacred canon of South India.
The images of the saints are ideal portraits, transfigured by bhakti, the state of loving devotion.
Chandikeshvara is the principal guardian of Shiva. During the Chola period, all Shiva temples had a separate subsidary shrine dedicated to Chandikeshvara as supervisor, usually on the northern side near the sanctum. Legend speaks of the young boy worshipping a simple mud linga and using milk from the cows he tended for the ritual daily lustration. When his father came to chastise him for wasting the milk, Chandesha was so absorbed in meditation that he did not hear. His angry father kicked the linga and Chandesha lashed out with his staff, which miraculously turned into Shiva's sacred axe. Pleased by the intensity of Chandesha's devotion, Shiva and Uma blessed him with a divine garland, see V. Dehejia, Chola, Sacred Bronzes of Southern India, 2006, p. 109.

From a private Swiss Collection is Seated in dhyanasana on a throne with claw feet with his hands folded in his lap, the folds of his sanghati finely carved piling at the ankles and spilling over the edge of the base, his torso adorned with beaded necklaces, the face serene with heavy-lidded eyes and raised urna surmounted by a turban centered by a lotus tiara and backed by a nimbus, with a seated bodhisattva and attendant figures at the base; 34 in. (86.4 cm.) high.

Notes: The treatment of the jewelry, with the necklace elegantly suspended across the shoulder and the fluid drapery spilling across the throne is of outstanding execution.

Will also be featured : Standing in slight tribhanga on a double lotus over a square plinth, with his hands folded before his chest, with broad shoulders and gracefully modeled limbs, wearing a short dhoti secured with a beaded belt, his bearded face with a serene expression flanked by pendant earlobes with the hair in a high jatamukuta; 31½ in. (80 cm.) high

Notes: Superbly executed, the sculpture appears to be imbued with individualized features, suggesting a portrait of a Royal donor. He clutches a garland of flowers between his palms and is adorned with beaded necklaces and armlets, contrasting with the purity of form of his broad-shouldered upper torso. A vertical ridge is delineated on his lower legs, a later sylistic device, further enhancing the clarity of form. The face is unusually framed by a goatee and with a deeply spiritual expression. Well carved dancing with his four arms radiating around him and holding an axe and bowl of sweets, clad in a short dhoti and adorned with beaded jewelry, the naga wrapped around his belly and the rat at his feet, his head tilted to his left with the trunk curled towards the sweets, flanked by columns, lions, and elephants; 27¾ in. (70.5 cm.) high.

Notes: The theme of the dancing Ganesha, in which he follows in the footsteps of his father, Shiva Nataraja, particularly captivated the sculptors of Central India and they produced some of the liveliest examples between the 8th and 11th centuries. This present work is set in an impressive architectural framework with columns flanking the deity with lively modeling of the lions, who stand with one foot on the heads of sedentary elephants. Standing on a lotus base with his hips slight askance, his right hand in varadamudra and his left holding a lotus stem blossoming at the shoulder, clad in a short dhoti and adorned with a sash and various jewelry, the face serene with heavy-lidded downcast eyes surmounted by a tiara centered by a figure of Amitabha, the skin cold gold, the face and hair with polychromy; 23 7/8 in. (60.6 cm.) high

Notes: Avalokiteshvara was a popular deity in Nepal, and as such, his image, especially in the form of Padmapani, was extremely prevalent from an early period. Iconographically and stylistically, images of Padmapani varied little over time, and was originally inspired by Indian prototypes from the Gupta period. 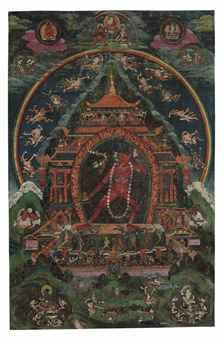 Vajrayogini striding in alidhasana over prone figures at center holding a chopper and a skull cup, with a garland of skulls and backed by a flaming aureole, within a palace with flying deities and Vairocana Buddha above, with a cemetery scene with tantric rituals below flanked by two teaching scenes: 31 x 20¼ in. (78.7 x 51.4 cm.)