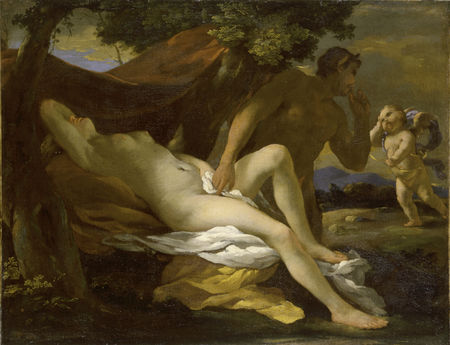 Jupiter and Antiope or Venus and Satyr by Nicolas Poussin (1584-1665), Young girl holding two puppies by Jean-Honoré Fragonard (1732-1806) and Femme nue or Woman with a Parrot by Gustave Courbet (1819-1877) are the three alluring works that were selected from Jeff Koons’ collection to show in Paris.

Like many avant-garde artists, Koons aspires to emulate the standards of the Old Masters and has always deeply engaged with the history of art. Born in York, Pennsylvania, in 1955, he painted copies of Old Masters and sold them in his father’s furniture store before studying art at Baltimore and Chicago. He has collected throughout his professional life and, while he has always bought the work of high-profile contemporary artists, more recently he has focused on Old Master and 19th century works. As with these three ravishing paintings, many of the works in Koons’ collection share a preoccupation with the female body and sexuality which is often seen in his own work.

Poussin’s Jupiter and Antiope or Venus and Satyr is virtually unknown and unseen for over a century. The great connoisseur G. F. Waagen described it as ‘an excellent picture by Nicolas Poussin’ in his Treasures of Art in Great Britain in 1854, and it was exhibited in a celebrated exhibition in Manchester three years later. It is Poussin at his most seductive and openly carnal. A nude woman reclines in the woods at the base of a tree, her arm covering her eyes. A naked horned satyr, who has stumbled upon the sleeping beauty, turns around to silence Cupid who approaches preparing to shoot Love’s dart. Most of the scene is cast in deep roseate shadows with only a single, strong ray of light illuminating the focus of inspiration and imagination, her opened legs.

Fragonard’s Young girl holding two puppies was first recorded in the collection of the king’s printer, Louis François Prault (1734-1806) and was sold at auction in Paris with its pendant on 27 November 1780. Prault owned six paintings by Fragonard, all oval and executed around 1770. Throughout the 1770s Fragonard made something of a specialty of painting beautiful, scantily clad young women fondling or playing with pet animals. This painting, in which the young girl fixes the observer firmly with her gaze while cuddling the two puppies to her flirtatiously exposed breasts, possesses a gentle and somewhat ambivalent sensuality. The work is irresistibly characterised by the fluent brushwork, a dancing sense of movement and the opalescent colouring that Fragonard had fully mastered by this time. Painted at the height of Courbet’s artistic powers, Femme nue belongs to the series of major, and at the time, controversial nude paintings he executed in 1865-66, including Femme au perroquet, now in the Metropolitan Museum of Art, New York, for which Femme nue is a finished and signed study; Le Sommeil in the Musée du Petit Palais, Paris; and, most famously, L’Origine du monde in the Musée d’Orsay, Paris. Femme nue, the last great Courbet nude from this period still in private hands, was painted at the moment when his superb portraits and sensual, life-size paintings of nudes were finally beginning to win popular success. Eccentrically posed, with her head thrown back and her wavy brown hair spilling over the lower corner of the composition, the young model has an extraordinary physical presence. Heightened by Courbet’s dramatic lighting and his flair for rendering human flesh, the girl’s half smile, faint blush and Siren pose seduce the observer. The model was almost certainly Jo Hifferman, a young Irish girl who was the model and mistress of the American-born British-based artist James Abbott McNeill Whistler (1834-1903), whose beauty and thick, wavy and lustrous red hair Courbet greatly admired. These three captivating paintings will undoubtedly be an alluring attraction to Paris Tableau, a new event which promises to be an important addition to the vibrant art scene this autumn