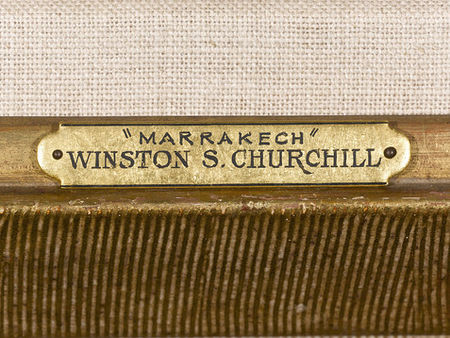 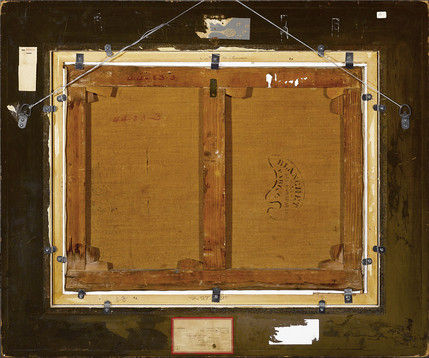 Marked by its fascinating provenance and rarity, this highly important oil landscape by Sir Winston Spencer Churchill, entitled The Tower of Katoubia Mosque, was given by Churchill to President Franklin Delano Roosevelt in commemoration of their trip to Marrakech after the Casablanca Conference during World War II. This painting is the only one Churchill composed during the entire war, validating the importance and rarity of this piece. It depicts the very moment the two world leaders shared "as they viewed the majestic landscape of Marrakech as the sun set over the Atlas Mountains·"

The Casablanca Conference was held at the Anfa Hotel inCasablanca, Morocco, then a French protectorate, from January 14 to 24, 1943 to plan theAlliesstrategy in the European theater ofWorld War II.Churchill fell in love with Morocco, and the city of Marrakech in particular, during his first visit to the region in 1935. After the Casablanca Conference came to a close, Churchill seized the perfect opportunity to share the area's breathtaking scenery with fellow world leader and close personal friend, President Roosevelt. It took much persuasion on the part of Churchill, who proclaimed to Roosevelt:

"You cannot come all this way to North Africa without seeing Marrakech. Let us spend two days there. I must be with you when you see the sun set on the Atlas Mountains."

The pair made the 150-mile journey from Casablanca to Marrakech to stay at the Villa Taylor, owned by a wealthy American socialite, Mrs. Moses Taylor. Arriving late in the afternoon, Churchill insisted that Roosevelt accompany him to the Berber tower atop the villa to view the sunset. The President's assistants carried him up the stairs by making a chair with their arms, and the pair sat and witnessed the sun's golden rays glistening along the snow-capped peaks of the Atlas Mountains. It is said that Roosevelt was so taken by the scene that, with outstretched arms, he lightheartedly exclaimed to his dear friend:

"I feel like a sultan, you may kiss my hand my dear."

Churchill awoke the following morning, in his pajamas with cigar in hand (as the Prime Minister was not an early riser), to escort Roosevelt to the airport to bid his friend a safe journey home. The photographers at the airfield all jumped at the opportunity of a lifetime to photograph the Prime Minister dressed this way, but Churchill begged them off by stating, "you simply cannot do this to me." After the farewell, Churchill refused to stay for the takeoff. He turned to his associate, Vice Counsel Pendar and stated, "I don't like to see them take off. It makes me far too nervous. If anything happened to that man, I couldn't stand it. He is the truest friend; he has the farthest vision; he is the greatest man I've ever known."

Upon returning to the villa, Churchill summoned his valet, "Sawyers, my painting things. Please put them on the tower." and he climbed the tower and studied the view for a moment, reflecting on the time he had spent with his friend, and began painting the only painting he attempted the entire war. His love of vibrant color and use of bold, energetic brushwork proved perfect to dutifully capture the life-affirming energy he found in sharing his love for what he referred to as "The Paris of the Sahara" with Roosevelt.

The viewer is treated to a scene created by an artist in the very moment he unleashed the creative force that had been constrained by the mental and physical burdens of war. Once completed, Churchill gave this dynamic landscape to his dear friend Roosevelt as a memento of their brief reprieve from the demands of leadership and as a symbol of the unification of the free peoples of the world. It can be speculated that, since Roosevelt's birthday is January 30, that Churchill may have given him the painting as a birthday present. The President proudly hung the painting in his Hyde Park home.

It is not difficult in retrospect to figure out the psychology of Churchill choosing this moment to paint. Despite being the elder of the two, he looked up to Roosevelt like he did to no one else. He wanted to do something special for "this most special of men." It is also interesting if one were to view the British war experience as a swinging pendulum, with the moment this painting was created acting as the fulcrum. From September 3rd, 1939 to January 1943, virtually every bit of news that came out of the war was dire for Britain. From the Spring of 1943 to the end of the war, the pendulum had swung the other way, and the great majority of the news from the battle front finally started to show the first signs of improvement. The war had not yet turned in the Allies favor, but the German forward momentum had stopped. The Americans had landed in North Africa and the pivotal battle of Stalingrad was just beginning to tilt towards the Russians. For the first time, there was a light at the end of the tunnel, and Churchill must have felt a hope that had been absent in his soul for many years.

The painting itself is stunning. It depicts the famed Tower of Katoubia Mosque at sunset with the snowcapped Atlas Mountains in the distance. Where else could one paint an architectural wonder, a desert, snowcapped mountains and the winter river that used to flow to the city? It is no wonder Churchill thought of this as "the most beautiful place in the world."

In 1948, Churchill gave another painting of Marrakech to Roosevelt's successor, President Harry S. Truman. Though the work depicts a similar scene, it lacks the detail, depth and emotional aspects that are impossible to duplicate, not to mention, the obvious rarity and historical significance. The Roosevelt "Marrakech" bursts with color, verdant trees in the mid-ground peppered between the sun-bleached village, with the Katoubia Mosque towering high above. Even the snow atop the mountains appears brighter and more pure in the 1943 composition. Truman's painting stayed in his possession until the leader's death in 1972, when it was passed down to his daughter, Margaret Truman Daniel. Daniel sold the painting at the December 13, 2007 Sotheby's auction in London for $949,918 USD.

Immediately recognized as one of the most important statesmen in world history, Churchill pursued the art of painting for more than 40 years, becoming a dominating passion the last half of his life. There is little evidence that he had any artistic training prior to his 40s. In fact, his wife Clementine mentioned at one point that before he began painting, Churchill had hardly visited an art museum, much less created art. Churchill first began painting following a personal and political disaster, the Dardanelles campaign, in 1915, with the encouragement of his sister-in-law, Goonie. Churchill and his wife rented a small country house in Surrey to escape the publicity of his political woes. His brother Jack and Goonie would stay with them often. She was a gifted watercolorist and, upon observing her one day, the statesman was persuaded to try his hand at painting. From then on, art would become his refuge from the world. He is quoted as telling the painter Sir John Rothenstein:

"If it weren't for painting, I couldn't live; I couldn't bear the strain of things."

In 1948, he was bestowed the prestigious recognition of Honorary Academician Extraordinary by the Royal Academy of Arts. He painted roughly 500 works, approximately 350 which are housed in Churchill's garden studio at Chartwell.

Only a few paintings left Churchill's possession and were given to friends as gifts, including The Tower of Katoubia Mosque. The majority of those remain in private collections, making our current offering even more exceptional. Despite the fact that this "most famous" of all Churchill's works has been missing for over 25 years, it is still prominently pictured and described in every book written on the Prime Ministers paintings. The painting was passed from President Roosevelt to his son, Elliot, who sold it in 1950 to George W. Woodward, a Nebraska collector. Woodward later sold it to author, movie producer, financier and art collector Norman G. Hickman, who served as associate producer of the Churchill-themed film, "The Finest Hours" in 1964. While in his possession, The Tower of Katoubia Mosque was exhibited at the New York Daily News building in January, 1965 and later at the Churchill Memorial in Fulton, Missouri during the Summer of 1970. Upon Hickman's death, it was passed to his second wife and then to her daughter, where it was stored in a closet for the past 15 years. Though a mutual friend, we were fortunate to acquire this most important masterpiece.

Few works of art come on the market with the remarkable and complete provenance of this painting. Created by and exchanged between Sir Winston Spencer Churchill and Franklin Delano Roosevelt-two of the most pivotal and admired figures in of their time, added to the fact that this is the only painting the famed orator created during WWII, makes The Tower of Katoubia Mosque one of the most historically significant works of art available anywhere for acquisition.

Works by Churchill can be found in the permanent collections of the following museums: The Royal Academy, London
Tate Gallery, London
The Metropolitan Museum of Art, New York
The Smithsonian Institution, Washington, D.C.
Dallas Museum of Art
Museum of Art Sao Paolo, Brazil