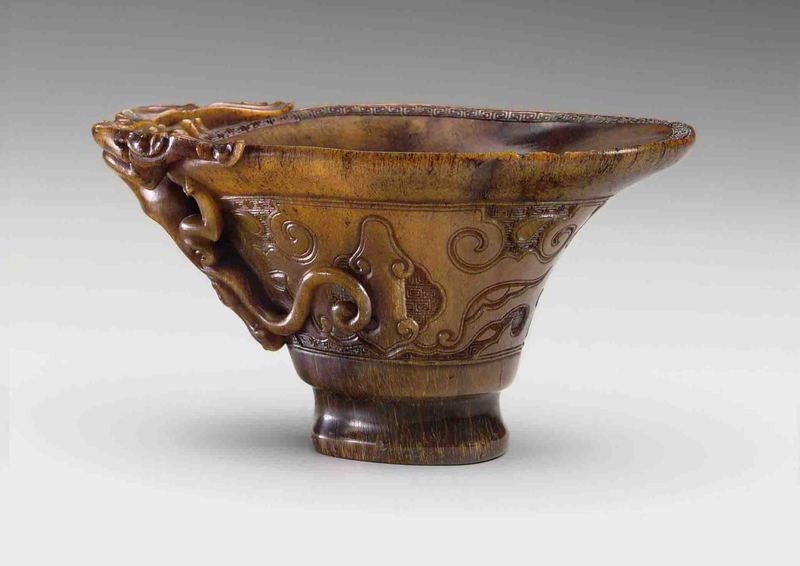 Carved around the sides with a band of taotie masks reserved on a leiwenground, the handle formed by two clambering chilong, the larger reaching over into the interior as it bites the rim, which is incised with a further band of key fret, the horn of rich honey color.

Property from the Margaret N. and Everett A. Palmer, Jr. Collection. Carved as a large camellia blossom borne on a branch forming the openwork base and handle, surmounted by a smaller camellia whose petals trail over into the interior, the sides carved with further camellia and prunus blossoms amidst leafy branches, wood stand. 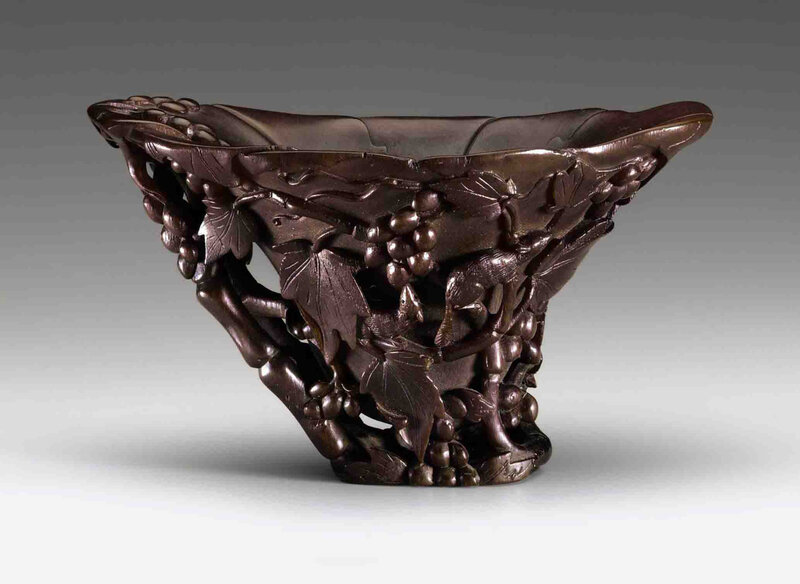 Carved as four large overlapping leaves, their tips folding over the rim to the exterior which is carved with squirrels clambering amidst heavily laden grape vines, their eyes inlaid with tiny glass beads, the thick branches forming the openwork handle and base and trailing over into the interior bearing two more ripe bunches of grapes.

Property from the Margaret N. and Everett A. Palmer, Jr. Collection.

Note: As squirrels have large litters, the depiction of a squirrel with trailing vines may be a visual rebus for a wish for many sons and the continuation of the family line, the winding vines representing the family lineage. It has also been suggested that the squirrel and grape-vine motif conveys a wish for promotion to a higher rank. Carved as a large camellia blossom borne on a branch forming the openwork base and handle, with a chilong clambering atop the rim, the sides carved with further camellia and prunus blossoms amidst leafy branches. Carved around the sides with a scene of a scholar sitting on a rock with his hand held against his ear listening to the sounds of nature, his attendant walking away holding a qin under his arm, all in a rocky landscape surrounded by ancient trees, the undercut trunk of a pine tree forming the handle, the sides carved with a poetic couplet reading zuo shi dui hua chun zi zu, he xu xian shang mi jia yin, stand.

Provenance: George H. Taber Collection, and thence by descent within the family

The property of a lady

Notes: The poetic couplet seen on the present cup may be translated as: 'Sitting on a rock enjoying the sounds of spring, why seek beautiful music in strings'? 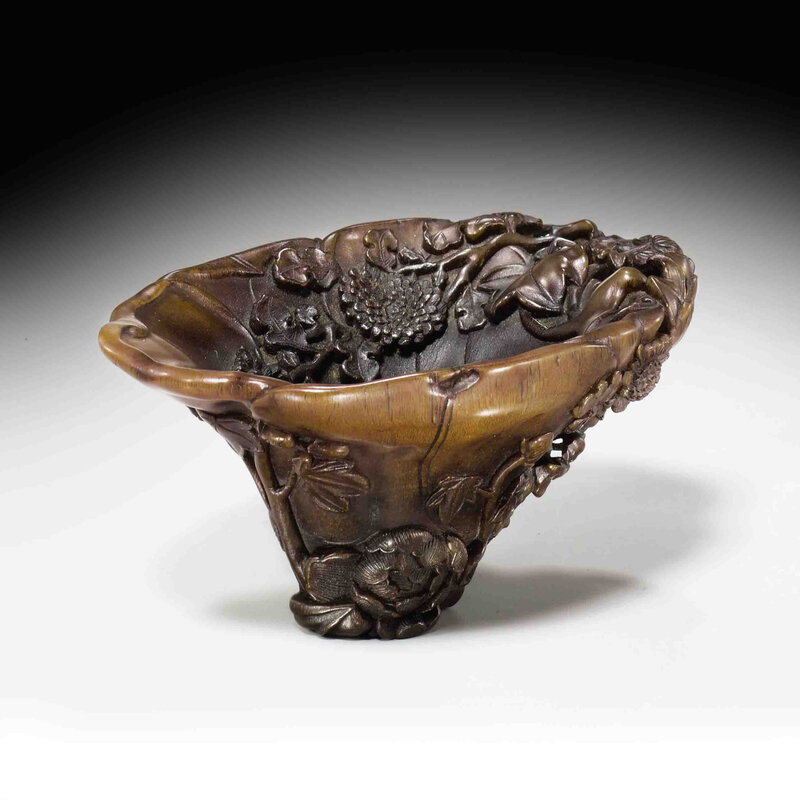 Carved as a flower with inward-curved petal tips at the rim, borne on a large branching stem that begins on the interior and continues down one end to form part of the handle before disappearing under the overlapping leaves that form the base from which rise further leafy, budding and flowering double hollyhock stems, the handle also formed by smaller branching stems of the hollyhock and chrysathemums that bear lush blossoms and continue over the rim into the interior, the horn of dark honey color

Provenance; Acquired in the United States in 1960 or earlier.

Property from a private Virginia collection The large, deep cup with ruffled edge raised on a long tapering stem encased within the intricate openwork carving of the remainder of the horn, which depicts scholars and their attendants, one beckoning a buddhistic lion, and birds in flight amidst grape vines and pine boughs, the horn of honey color, wood stand.

Provenance: Acquired in the mid-late 1960s and thence by descent within the family.

Property from a private collection 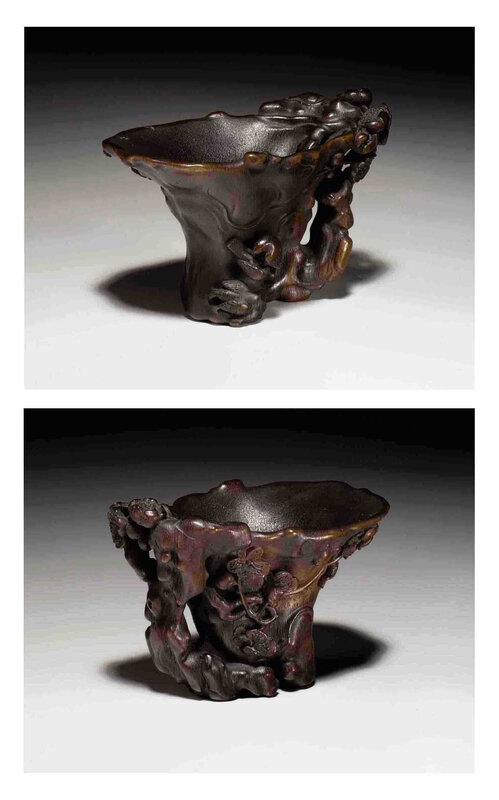 Carved around the exterior to resemble a gnarled prunus stump, an undercut flowering branch extending upwards from the base to form the handle, sprouting smaller flowering branches that wrap around one side, the other side with three small birds, the material of dark honey tone with some lighter areas

Provenance: Acquired prior to 1923 and thence by descent.

Property from the estate of George O. Doyle

Well carved in high relief around the sloping sides with a recumbent deer gazing up at Shoulao descending on a crane to meet the Eight Immortals carved around the sides, each bearing an attribute and standing on an openwork base carved as billowy scrolling clouds, the horn of golden honey-brown tone, box

Property from The Margaret N. and Everett A. Palmer, Jr.Collection

Notes: A few cups carved with the Eight Immortals and Shoulao have been published. One of smaller size (9 cm.), dated to the 17th century, is illustrated by T. Fok, Connoisseurship of Rhinoceros Horn Carving in China, Hong Kong, 1999, no. 82. Another cup carved with the same theme, from the Chester Beatty Library, Dublin, is illustrated by J. Chapman, The Art of Rhinoceros Horn Carving in China, London, 1999, figs. 270-2. See, also, the example sold in these rooms, 24-25 March 2011, lot 1454. The sides carved in low relief with a band of stylized taotie masks divided and separated by notched flanges and reserved on a leiwen ground below a key-fret border at the rim, carved in high relief with four inquisitve chilong crawling up to the rim and onto the top of the openwork strap handle at one end opposite the pouring spout at the other, the horn of rich honey color

Provenance: Acquired in the United States in 1960 or earlier.

Property from a private Virginia collection 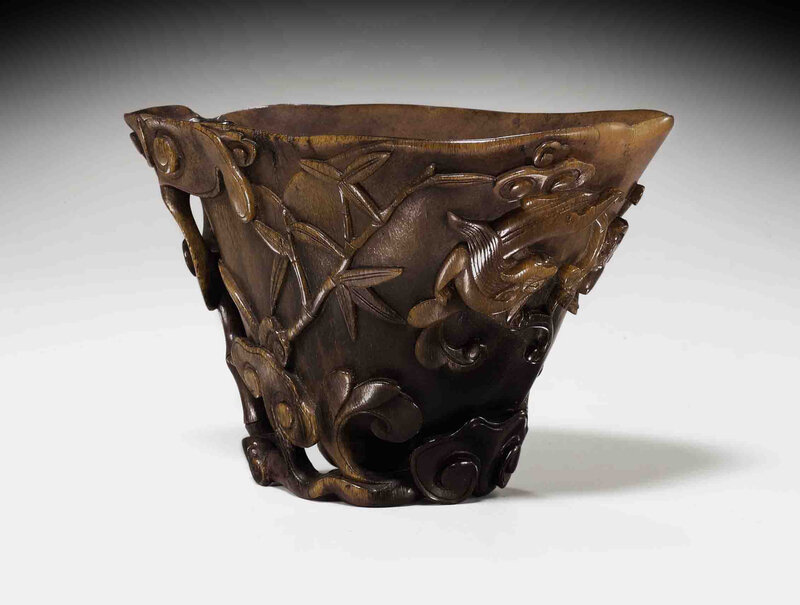 Carved as a large lingzhi head borne on a stem that rises from the openwork base and continues up and around the sides bearing further fungus heads and forming one side of the handle opposite a slender bamboo cane that forms the other side, with two chilong clambering amidst lingzhi below the spout, of deep honey color shading to blackish brown at the bottom 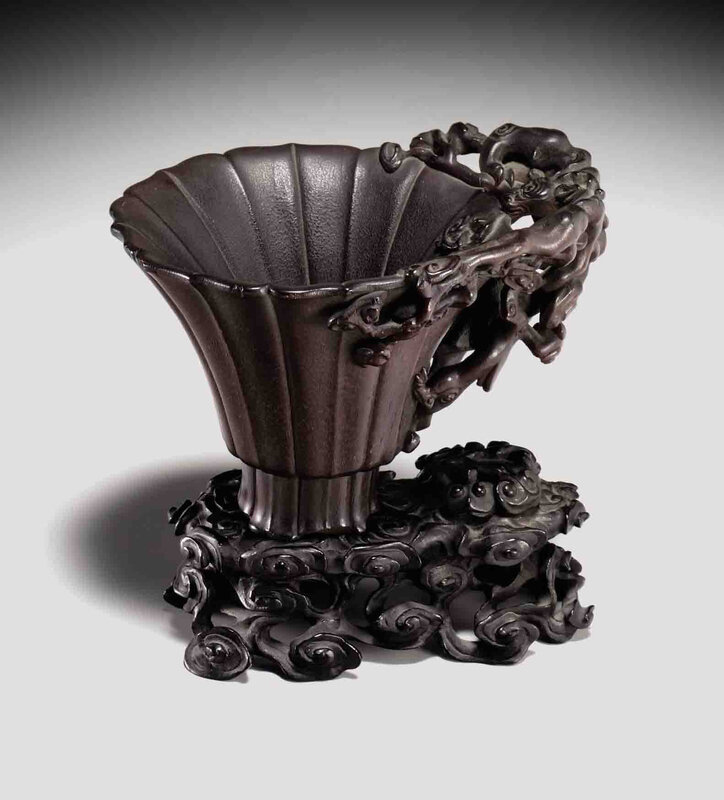 In the form of an open blossom raised on a tall foot, carved on one side with two sinuous chilong that form the openwork handle, with one grasping a lingzhi in its mouth peering over the rim amidst further sprays of lingzhi, the interior of the base carved with a seal reading, Hu Xingyue zhi, the interior of dark brown color in contrast to the lighter, reddish-brown exterior, wood stand.

Provenance: Acquired in the 1920s and thence by descent within the family.

The property of a lady.