DRESDEN.- An exhibition by the Vatican Museums and the Staatliche Kunstsammlungen Dresden 6 September 2011 – 8 January 2012 Venue: Gemäldegalerie Alte Meister, am Zwinger, Theaterplatz 1, Dresden Opening hours: 10 a.m. to 6 p.m. daily, closed on Mondays Just under 500
years ago Raphael, the most celebrated painter of the Renaissance, painted the “Sistine Madonna” and the “Madonna di Foligno”. These two masterpieces must be regarded as counterparts, or even ‘twins’, and it is quite probable that they stood together in Raphael’s workshop. They are now to be reunited in a special exhibition: “Himmlischer Glanz. Raffael, Dürer und Grünewald malen die Madonna” (Heavenly Splendour. Raphael, Dürer and Grünewald paint the Madonna) (Staatliche Kunstsammlungen Dresden, Gemäldegalerie Alte Meister, 6. 9. 2011 – 8. 1. 2012).

As an absolutely exceptional measure, Raphael’s large altarpiece entitled “Madonna di Foligno” will be leaving the Pinacoteca Vaticana for the
first time specifically for this exhibition. Further top-quality examples of  representations of the Madonna dating from the period of Raphael will also be on show in the exhibition. These will include works by artists who worked both north and south of the Alps. “This exhibition is being held to coincide with the visit of Pope Benedict XVI to Germany at the end of September 2011,” says His Eminence Giovanni Cardinal Lajolo, President of the Governatorate of Vatican City State.

“In bringing these two paintings together, Pope Benedikt XVI is promoting a unique scientific and cultural event”. Prof. Antonio Paolucci, Director of the Vatican Museums, emphasises the key role played by Ambassador Dr. Walter Jürgen Schmid, Embassy of the Federal Republic of Germany to the Holy See, in bringing the idea of this exhibition to fruition.

The exhibition is devoted to one of the most popular Renaissance motifs. At that time no image was more frequently portrayed than that of the Mother of God. The question of the ideal manner of dealing with this theme inspired artists to produce great masterpieces. Even among his contemporaries, Raphael was considered the preeminent Madonna painter; in the Holy Roman Empire, names such as Albrecht Dürer, Matthias Grünewald and Lucas Cranach the Elder stand for the high art of representing the Virgin. The exhibition brings together outstanding examples of
works from this large and complex set of themes, including paintings depicting Marian apparitions and scenes from the life of the Virgin.

The focus of the exhibition will be on Raphael’s “Sistine Madonna” (Gemäldegalerie Alte Meister Dresden) and “Madonna di Foligno” (Pinacoteca Vaticana). These two paintings are closely related. Raphael painted the large, more than 3-metre high altarpiece called the “Madonna di Foligno” in 1512, before receiving the commission to produce the “Sistine Madonna” from Pope Julius II in the same year. It is therefore highly probable that the two paintings stood together in Raphael’s workshop, and now they are being reunited for the first time. They are among the artist’s major works and are both forceful representations of a Marian apparition. In the case of the “Madonna di Foligno”, Raphael’s composition takes the typical form of a vision appearing to the donor, Sigismondo de Conti. In the “Sistine Madonna”, on the other hand, the artist has painted the entire canvas as a vision; the curtain opens and the saints appear among clouds before the eyes of every viewer.

During the same decade as Raphael produced these two great Madonnas, the tradition of depicting the Virgin culminated in artistically outstanding works north of the Alps as well. A superlative example in terms of both quality and content is the “Stuppach Madonna” by Matthias Grünewald (Bad Mergentheim, Parish Church of the Coronation of the Virgin), which along with the Isenheim Altarpiece is undoubtedly one of the artist’s foremost works. It was painted in 1519 and is therefore almost contemporaneous with Raphael’s two altarpieces. Grünewald, who appears to have been the most unconventional and obstreperous painter of his era and who after his rediscovery in the late 19th century even found appeal among the Modernists, has created in the “Stuppach Madonna” a unique fusion of mystical and theological ideas combined with a world view shaped by the modern observation of nature. The loan of this painting (subject to the consent of the State Office for the Preservation of Historic Monuments) is another highlight of this exhibition.

The exhibition will also bring together further examples of representations of the Madonna, including a depiction of a Marian apparition by Cranach the Elder (Städel Museum, Frankfurt am Main) as well as works by Dürer, Garofalo and Correggio from the Gemäldegalerie Alte Meister Dresden. A very special insight into Raphael’s workshop is provided by the only surviving preparatory sketch for the “Madonna di Foligno” done in the artist’s own hand (British Museum, London) as well as a drawing, also by Raphael and closely related both to the “Madonna di Foligno” and the “Sistine Madonna” which is held in the Städel Museum in Frankfurt am Main. The intense interest in the motif of
Marian apparitions is also demonstrated by the two engravings of the “Madonna in the Clouds” (Kupferstich-Kabinett Dresden), which were executed in about 1512 by Marcantonio Raimondi in Raphael’s studio on the basis of drawings by Raphael himself. Additional exhibits on the theme of the life of the Virgin and Marian legends as well as the presentation about the patrons who commissioned “Madonna di Foligno” and the “Sistine Madonna” round off the exhibition. It brings together in concentrated form around 20 objects - including paintings, drawings, engravings and books, along with other documents dating from the Renaissance – in order to celebrate this exclusive encounter between Raphael’s two great altarpieces in Dresden.

“The joint exhibition by the Vatican Museums and the Staatliche Kunstsammlungen Dresden is an outstanding event for the Free State of Saxony and in the artistic life of the Saxon capital. I am certain that this unique show will attract attention far beyond the boundaries of Dresden and I am pleased that the visit to Germany of Pope Benedikt XVI is being extended to Saxony in this way. I am grateful to all those involved, in particular the two museum directors, Prof. Paolucci and Prof. Roth, as well as the German Ambassador to the Holy See, Ambassador Dr. Schmid, for enabling this exhibition to take place,” said the President of the Saxon Landtag, Dr. Mathias Rößler.

During the press conference the Vatican Museums and the State Art Collections Dresden introduced their future projects, including a series of talks and a scientific study day about the exhibition as well as a further special exhibition concerning the Dresden-born artist Ferdinand Pettrich (1798-1872) featuring works dealing with the life of the Sauks-Foxes, Sioux, Winnebago and Creek, which are held in the Museo Missionario-Etnologico of the Vatican Museums.

One anniversary, two exhibitions: The exhibition "Heavenly Splendour. Raphael, Dürer and Grünewald paint the Madonna” will mark the beginning of the Staatliche Kunstsammlungen Dresden’s Jubilee Year 2012, in which the 500th anniversary of the creation of Raphael’s Dresden masterpiece will be celebrated. The major Jubilee Exhibition next year will be called “Die Sixtinische Madonna. Raffaels Kultbild wird 500” (The Sistine Madonna. Raphael’s Cult Image Turns 500) (26. 5. – 26. 8. 2012 in the Gemäldegalerie Alte Meister Dresden).

The exhibition will be accompanied by a catalogue edited by Andreas Henning and Arnold Nesselrath. 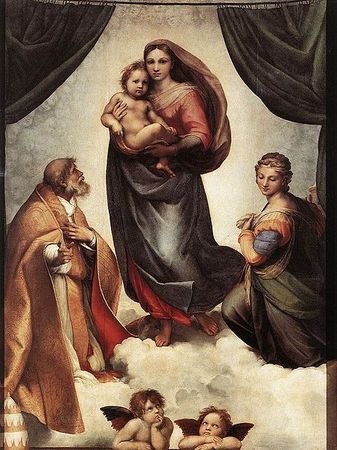