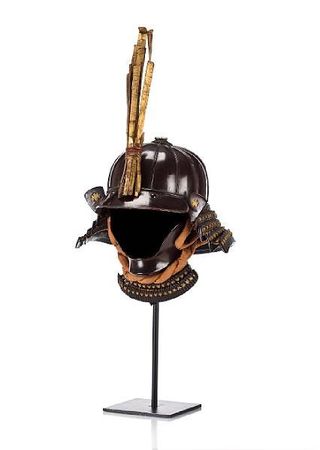 The bulbous helmet constructed from twelve plates riveted together and covered with a layer of heavy black lacquer which has taken on a rich brownish patina, mounted with a four-stage chrysanthemum tehen kanamono and fitted with a four-lame shikoro terminating in small fukigaeshi applied with gilt-metal paulownia crests, signed on the interior in red lacquere Haruta Mitsusada, the unusual maedate designed in paper, wood and gold lacquer as a Shinto priest's baton (shide); the hanbo lacquered to match the helmet and fitted with a three-lame yodarekake

Note: This helmet is in its original condition, except for the neck guard which was changed at a later date, likely during the late-16th century when the hanbo was added to the configuration. Both of these later additions still retain their original lacing. Haruta Mitsusada was one of the leading masters of the Haruta school and his signed works are rare. The heavy thirty-two plate kabuto constructed with the large rivets exposed and set off with grommets and covered entirely in black lacquer, the bowl mounted with a three-stage tehen kanamono and a five-lame Hineno-style shikoro, with small fukigaeshi decorated with silver confronted-ginger family crest inlaid into the surface of the lacquer, the front of the helmet mounted with an old, large silver and gilt-tin maedate formed as Mt. Fuji - Estimate: US$10,000 - 15,000

Note: This helmet is a fine example by Hisatsuke. It is thought that this smith may have originally worked in Odawara and moved to Nara around the turn of the 17th century.

In its original configuration, this helmet was fitted with fukurin (decorative gilt-copper piping) which covered flanges of the individual plates and an older style shikoro (neck guard) that protruded out to the sides. The kabuto was refurbished in the Edo period when the fukurin were removed and a more vertical Hineno-style shikoro replaced the original. The broad helmet bowl swelling at the back of the crown in classic akoda nari shape and mounted with a four-stage chrysanthemum tehen kanamono and gilt-copper shinodare, the mabizashi trimmed with gilt-copper fukurin, a four-lame Hineno-style shikoro lacquered black and laced in dark blue, fukigaeshi applied with stenciled doe skin, silk cord and gilt-copper and shakudo crests pierce carved with chrysanthemum scroll; gilt-copper and lacquer ino me maedate - Estimate: US$8,000 - 10,000 The thirty-two plate iron bowl rising at the rear in typical goshozan style, lacquered russet-brown and mounted with a simple three-stage tehen kanamono and six-lame solid shikoro laced in blue with most of the original lacing intact, the mabizashi applied with a crescent-shaped section of gilt leather and mounted with a circular gilt-metal maedate, the rear of the helmet with a gilt-copper "radiant-sun" ushiro-date, probably a later replacement constructed to fit the original mounting post - Estimate: US$6,000 - 8,000

Note: This style of helmet with its gilt-leather semi-circle on the mabizashi and radiant sun ushirodate is relatively uncommon today but sometimes appeared in helmets from the early-17th century. The bowl designed with even sides gently sloping toward the crown and constructed of sixty-two narrow vertical plates with standing rear ridges finished in a fine russet patina, mounted with the original gilt-copper fittings, including a shakudo tehen kanamono carved as a floret pierced on the bottom stage with inoshishime, the mabizashi attached with three chrysanthemum rivets and applied with stenciled doe skin and a shakudo tate dai, signed on the interior of the bowl Saotome Ietada, the bowl mounted with a five-lame lacquered-iron shikoro with fukigaeshi decorated with stenciled doe skin and orange and white lacing - Estimate: US$5,000 - 7,000 The unusual helmet constructed with a copper bowl and lavishly decorated with dragons and clouds in copper wires and polychrome enamels, fitted with a Japanese liner and four-lame shikoro - Estimate: US$2,500 - 3,500

Note: The bowl of this helmet was likely imported to Japan from the Asian continent and had the original neck guard replaced with the contemporary Japanese shikoro.