On 18 October the Museo Thyssen-Bornemisza and Fundación Caja Madrid will be inaugurating the exhibition Architectural Paintings. From Renaissance to 18th Century. It comprises a group of more than 140 paintings from the Renaissance to the 18th century that depict buildings and cities, either as the principal motif or as the background for the depiction of other subjects. The exhibition will aim to show the visiting public the development of these architectural motifs or settings and the wide range of issues that contributed to the independence of the genre in the 18th century.

Painted buildings were one of the options chosen by numerous artists to emphasize the scenes and episodes depicted in their paintings, among them leading painters from the Mediterranean world and northern Europe between the 14th and 18th centuries including Duccio di Buoninsegna, Canaletto, Giovanni Paolo Panini, Tintoretto, Gaspar van Wittel, Hubert Robert, Maerten van Heemskerck, Hans Vredeman de Vries...  Curated by Delfín Rodríguez, Senior Professor of Art History at the Universidad Complutense, Madrid, and Mar Borobia, Chief Curator of Old Master Painting at the Museo Thyssen‐Bornemisza, the exhibition brings together works by these renowned artists, with outstanding loans from private collections and museums around the world, among them Musei Vaticani, National Gallery of Art (Washington), Galleria degli Uffizi, Museo del Prado and Patrimonio Nacional.

By including architectural motifs in their works, artists established the setting for the movement or position of the figures and provided them with a context that was credible in spatial, visual, historical, mythical, legendary and imaginary terms. In addition, such works could become innovative painted architectural projects or eloquent fragments of structures that steered the viewer’s emotions and the narrative thread through the use of walls, windows etc. The link between the painting of buildings and cities with travelling is another key theme in this exhibition, as is an analysis of the architectural ideas and solutions that these artists frequently presented in their works.

Behind their apparent objectivity, painted structures – cities, palaces, temporary constructions, ruins and designs – conceal symbols, recollections, or forms of political and religious propaganda , in some cases of considerable complexity. The works of these artists, who became increasingly specialised, particularly in the 17th and 18th centuries, responded to demand fromthe religious and political authorities and from intellectuals. On occasions they painted fantastical buildings inspired by ancient and modern travellers’ accounts or by religious or secular texts. These were backdrops and buildings charged with sacred or political resonances and symbolism, transformed into expressions of wealth and luxury, eulogies of particular individuals, emblems of cities or nations or recollections or exaltations of triumphs and journeys or visits. In other cases these artists painted buildings under construction or ones contemporary with the painting, introducing the very process of building into the representation: machines, tools, workmen, etc. They also painted ruins, which in the case of religious scenes such as the Nativity or the Adoration of the Magi, referred to the destruction of a pagan past over which the “new architecture” of Christianity arose. Similarly, the depiction of the classical architectural orders symbolised the new order of Humanism.

Painted buildings and settings were soon incorporated into the theory of representational systems, particularly those of perspective and architectural theory. Painting and architecture and their respective idioms thus began to express inherent tensions and conflicts through works that moved from painting to architecture and from planned or built architecture to painting. To paint buildings was a form of designing them and, conversely, to design and build them was a way of painting and adorning the world , including the world represented on the two ‐dimensional surface of the canvas.

The exhibition is structured both chronologically and thematically. The first part, on display at the Museo Thyssen‐Bornemisza, spans the 14th to the 17th centuries, a period in which the painting ofbuildings and city views was considered a minor genre but in which these elements frequently appeared as the backgrounds to religious, historical and mythological scenes. The depiction of such elements would become increasingly important until it triumphed as an independent genre in the 18th century, which is the subject ofthe second part of the exhibition in the exhibition space of Fundación Caja Madrid. It includes works by the great masters of the vedute , landscapes with ruins, capriccios etc.

Cities for living in or dreaming about, real, imaginary, surprising or dream‐like cities occupy the backgrounds of the paintings to be seen in the first rooms of the exhibition. Duccio di Buoninsegna, Francesco d’Antonio and Benedetto Bonfigli are among the 14th and 15th‐century artists whose paintings introduced the theme of “Architecture as Setting” with works in which the setting allows for the presentation of the religious narrative. Religious subject ‐matter is also the focus of the second section, “Perspective and Space”, which includes a group of paintings that reveals the importance of perspective, both pictorial and architectural, which was crucial to Renaissance art and to the evolution of painting from that point onwards. Artists represented include Fra Carnevale, Gentile Bellini and Tintoretto.

The next two sections, “The historical City: memory and ruins” and “The Ideal City”, introduce symbolism in the form of reverie,  recollection, emotion and fantasy as an additional element in the architectural settings of a range of scenes. It is thus to be found in the work of Italian artists such as Vittore Carpaccio and northern European ones including Maerten van Heemskerck. These two sections are followed by “Legendary Buildings and Cities ” and “Imaginary and fantastical Buildings”, which illustrate the theme of travel and its key role in the development of painted architecture as an independent pictorial genre. We see real or imaginary journeys, journeys in time or through the imagination. These works lead on to the representation of historical or mythical places and monuments such as Babylon, the Tower of Babel, the Colossus of Rhodes and the Lighthouse at Alexandria: buildings, ruins or cities entirely or partly created by the painter’s imagination.

The exhibition continues with an area devoted to “Antiquity as Landscape” featuring the work of great 17 th‐century painters such as Annibale Carracci and Claude Lorrain. Here the religious or historical subject becomes a more anecdotal pretext for the depiction of majestic landscapes with elements from the classical world. Finally, views of cities such as Rome and Naples or some of their most famous buildings and monuments are the subject of “The modern City as a Metaphor of Power". This section includes works by Viviano Codazzi and Gaspar van Wittel, among others, and is the last section in the first half of the exhibition.

“Cities of the Grand Tour” is the first section on display at Fundación Caja Madrid. These views of buildings and cities, which functioned as souvenirs of royal or historical trips, first appeared in the Renaissance but it was above all in the 18th century, with the rise of the socalled Grand Tour, that the genre of vedute reached its peak. This room includes works by all the leading representatives of vedute painting ‐ Canaletto, Guardi, Bellotto, Van Wittel, Zocchi, Panini and Marieschi – in the form of views of Italian cities, particularly Venice, with a markedly topographical focus. As a result such works became “postcards” or souvenirs for the aristocrats, intellectuals and European artists who wished to recall their experiences of Italian art and culture throughout the course of the 18th century. The evolution of the genre and its expansion beyond Italy can be seen in the next section, entitled “The Image of the City and Architecture in Europe”, which includes views of other cities, among them Madrid, with paintings of Atocha, the calle de Alcalá and the Royal Palace by Antonio Joli.

The attitude of other Grand Tour travellers, who seemingly allowed themselves to get lost and to be surprised by what they saw, confusing real views with fantasies and potential projects, led to the appearance of a new genre known as the capriccio. The room devoted to “Architectural Capriccios” features various examples by artists such as Canaletto, Bellotto and Panini in which real city views, buildings and historical monuments are combined with imaginary places and structures, on occasions associated with artistic and architectural innovations or new intellectual concepts. The same was the case with the subject of ruins, another sub‐genre of the architectural landscape and one that became widespread in the 18th century. In the present exhibition examples are included in the section “The Poetic of Ruins”, with works by Marco Ricci, Hubert Robert and Claude Joseph Vernet among others. Ruins were associated with the notion of the passing of time, both historical time and the day to day, and such works implied a journey into the past or through the present that encouraged thoughts of the future. The exhibition ends with a room devoted to “Ruins and Memory as Projects ” which displays a group of prints by Giovanni Battista Piranesi.

From 26 October 2011 to 18 January 2012 the Museum will present a monographic course associated with the exhibition. Entitled On Paintings of Buildings and Cities (accounts, travels, dreams, ruins and other imaginary places) , it is directed by the exhibition’s two curators and is ganised in collaboration with the Complutense and Autónoma universities in Madrid. It will benefit from the participation of distinguished international experts. 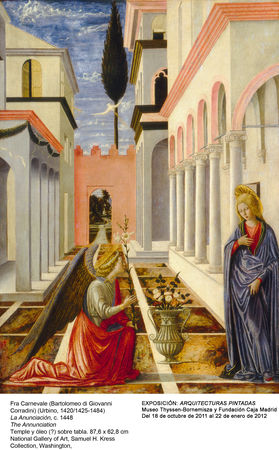 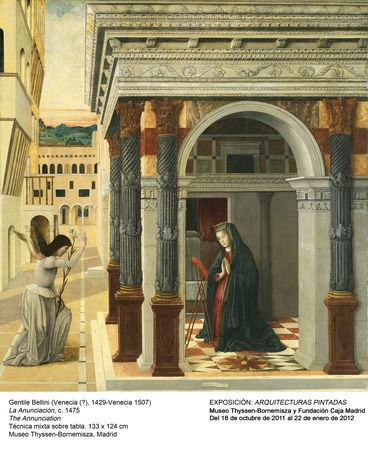 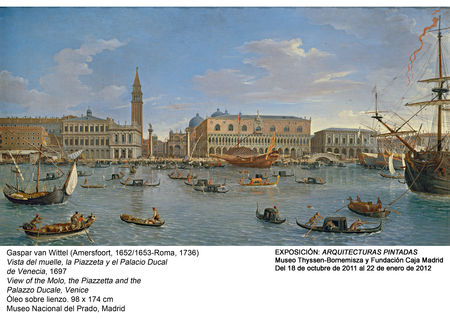 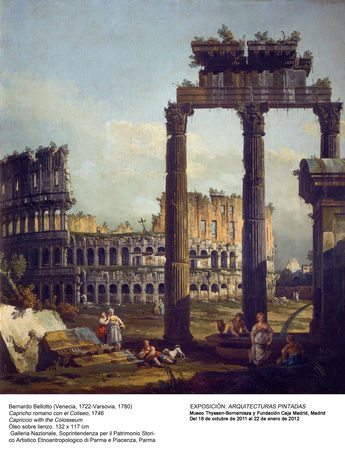 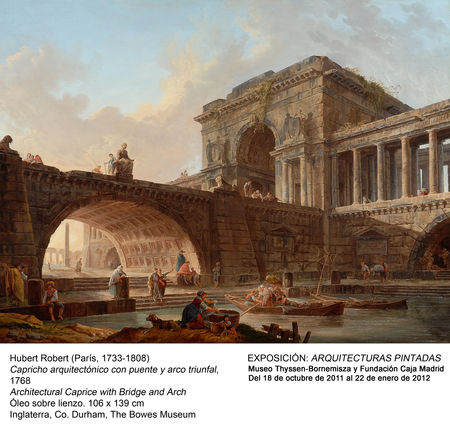