"Life & Luxury: The Art of Living in Eighteenth-Century Paris" @ the Museum of Fine Arts, Houston

"Life & Luxury: The Art of Living in Eighteenth-Century Paris" @ the Museum of Fine Arts, Houston HOUSTON, TX.- Beginning September 18, the Museum of Fine Arts, Houston presents Life & Luxury: The Art of Living in Eighteenth-century
Paris, which re-imagines, through art and material culture, the lifestyle of elite 18th-century Parisians. The exhibition follows the conventional ctivities in the cycle of a Parisian day—dressing, writing, collecting, eating, and evening entertainment—offering a glimpse of these forgotten activities.

Bringing together some 160 objects, roughly half of them loans from 26 museums and private collections around the world, the exhibition includes a wide range of paintings, sculpture, applied arts, drawings, metalwork, furniture, architectural fittings, lighting and hearth fixtures, scientific and musical instruments, clocks and watches, textiles and dress, books, and maps. “The MFAH is pleased to host this unique exhibition,” said Gwendolyn H. Goffe, MFAH interim director. “A multitude of museums from around the world have loaned important works of art including the Louvre, The National Gallery, London, National Galleries of Scotland, The Met, and LACMA, and of course the Getty’s great collection. It is an exciting opportunity to display these items in Houston and for museum visitors to have the opportunity to experience them in one location.”

“The structure of the exhibition is inviting to viewers because it allows them to experience the day of a typical elite Parisian in the 1700s. While the everyday objects offer insight into the daily Parisian lifestyle of this particular era, they are often works of great beauty and craftsmanship,” said Edgar Peters Bowron, the MFAH Audrey Jones Beck curator of European art. “The exhibition is a sensory-driven experience for viewers, and combines works including decorative arts, paintings, sculpture, textiles, costumes, drawings, prints and books. These objects are normally kept apart because of their sensitivity to light, but this exhibition brings the works together to convey a complete 18th-century Parisian day.” 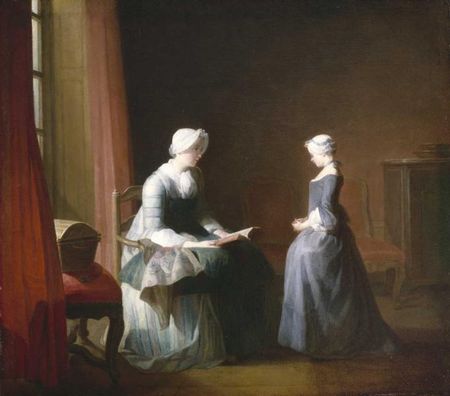 Jean-Siméon Chardin, The Good Education, c. 1753, oil on canvas, the MFAH, gift in memory of George R. Brown by his wife and children
The exhibition allows a glimpse into daily correspondence and business affairs, with furniture and accessories related to writing, record keeping, and document filing. Financiers and merchants often worked in offices, called bureaux, located within the home (forerunners to the modern home office) but typically set apart from the domestic sphere. Maurice-Quentin de la Tour's pastel portrait of Gabriel Bernard de Rieux (1687–1745) depicts a prominent member of the Paris Parliament. The interior depicted in the almost life-size portrait is evoked in all its detail by the adjacent display of many similar objects, arranged in comparable positions so that their artistic and physical characteristics, as well as their scale, can be conveyed.

A Parisian galerie is evoked and explores the act of collecting—particularly art. The assembled works typically reflected the knowledge of the collector, drawn from the classical canon of books he read, especially the sacred scriptures, or the epic and mythological stories of ancient Greece and Rome. In mid-18th-century Paris, the main meal was customarily consumed at midday, and a section of the exhibition considers the portrayal of the ingredients of the meal made under the direction of the artist Jean-Baptiste Oudry (1686–1755). These include still-life paintings of The Four Elements painted by Oudry (which show game, fish, poultry, and vegetables); a pair of wool and silk tapestries portraying picnickers and hunters; his engraved illustration, featuring a lavishly set table, for the tale of The City Rat and the Country Rat, in the 1755 edition of Jean de La Fontaine’s famous animal fables; and the Machine d’Argent, a still life sculpture in silver, by François-Thomas Germain, under Oudry’s intervention, which features a rabbit, two game birds, several types of mushrooms, and a variety of vegetables. Jean-François de Troy, Before the Ball, 1735,   oil on canvas, the J. Paul Getty Museum, Los Angeles
A section devoted to scientific pursuits examines the Enlightenment’s interest in the natural world. This portion of the exhibition includes several
volumes of the philosophes’ key publications, namely the Encyclopédie by Denis Diderot (1713–1784) and Jean le Rond d’Alembert (1717–1783) and the Histoire Naturelle (1749–1803) by the Comte de Buffon (1707–1788), opened to illustrated pages.

In order to better understand evening activities (before the invention of electric lighting), the exhibition focuses on two types of leisure occupations: music-making and game-playing. To recreate an era when nighttime gatherings were dependent on firelight and candlelight, the overall light levels in the final gallery are lowered. A five-legged card table will be featured with candles, to suggest how the objects might have been used together. The installation also includes a Parisian harpsichord of 1754 (The Metropolitan Museum of Art, New York), which survives with both its original sound box and its original lacquered surface decoration of chinoiserie motifs. The harpsichord is complemented by ambient audio recording of excerpts from the Suite in G major, Nouvelles Suites de Pièces de Clavecin (1726–27) by Jean-Philippe Rameau (French, 1683–1764). German, Casket (Carré de toilette), c. 1680–90, wood veneered with rosewood, brass, mother-of-pearl, pewter,  stained and painted horn, with gilt-bronze mounts, the J. Paul Getty Museum, Los Angeles
The final section of the exhibition is devoted to private prayer. A marquetry-veneered prie-dieu, or kneeler, a crucifix, and a hand-illuminated missal of are featured to demonstrate the significant role of religion in this predominantly Catholic city. Communal observance of faithful practices and private piety were an integral part of daily life, particularly quiet meditation, study of the scriptures, and self-reflection. This was facilitated at home by specially designed furniture such as the prie-dieu, by cabinetmaker Jean-Baptiste Tuart (master 1741), which also functioned as a writing desk and storage cabinet (Musée des Arts Décoratifs, Paris). This combined functionality illustrates how Parisian design and craft responded creatively to the multilayered needs of clients. 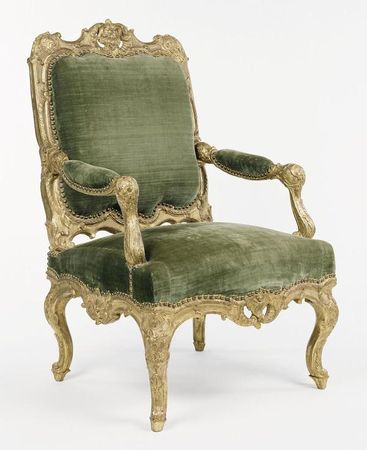