As Hollywood's leading lady for decades, Elizabeth Taylor often worked directly with designers to create the stunning looks that the cameras immortalized – from the ethereal silver Chanel ballgown and cape she wore to the Royal Film performance of The Taming of the Shrew in London in 1967, to the stunning ivory silk Valentino Couture gown she wore to the 64th Annual Academy Awards in 1992. Nearly 400 items comprise this broad collection, which includes a lifetime of one-of-a-kind haute couture gowns, prêt-à-porter fashions, coats, and capes, as well as scores of handbags, costume jewelry and shoes. Christie's New York will present 68 of Ms. Taylor's most iconic looks in a black-tie Evening Sale of fashion and accessories on December 14, followed by 326 additional items in three consecutive Day Sale sessions on December 15.

“One of the many great treasures within Elizabeth Taylor's vast collection is her extraordinarily well-preserved wardrobe. The stunning outfits she wore to galas, award ceremonies, AIDS benefits and even her own weddings to Richard Burton are all here, lovingly maintained along with the handbags, shoes, hats and other accessories that completed her superstar looks. Just as the unveiling of her iconic jewelry collection has dazzled fans and collectors the world over these last few weeks, this exceptional collection of Ms. Taylor's fashion is sure to inspire and delight all who come to see it during our global exhibition tour this fall,” said Marc Porter, Chairman and President of Christie's Americas.

“Spanning over fifty years of fashion, this is a highly personal collection, every stitch of which is reflective of Elizabeth Taylor's sense of fashion and the development of her distinctive style. This is not a red carpet wardrobe edited by stylists but a treasure trove of looks chosen by the last of
the great movie stars. Many of the pieces in this lifetime collection wEre couture, custom made for Ms. Taylor by designers who became her close friends, including Valentino Garavani, Gianni Versace and Gianfranco Ferré,” noted Meredith Etherington-Smith, Christie's curator for the fashion portion of the Collection. “In life, Elizabeth Taylor was delightfully fearless in her fashion choices and it is her joie-de-vivre, sense of play and megawatt stardom that shine through for anyone who sees this fabulous collection.”

Select highlights from Elizabeth Taylor's collection of fashion and accessories have joined the three-month global touring exhibition, which arrives at Christie's London on September 23. Nearly 6,000 people viewed the inaugural two-day public exhibition at GUM on Moscow's Red Square, held September 15 and 16. Additional tour stops for the jewelry and fashion collections will include Los Angeles, Dubai, Geneva, Paris, Hong Kong, and New York. The complete collection will be offered for sale at Christie's New York from December 13-16.

THE COLLECTION OF ELIZABETH TAYLOR: THE ICON AND HER HAUTE COUTURE
Stepping into the limelight in 1941 at the tender age of nine, Elizabeth Taylor rapidly became one of Hollywood's leading starlets. Growing up in the studio system, she quickly became immersed in the glamour of silver screen fashion with the help of some of the best costume designers of the era, including Edith Head, Helen Rose and Irene Sharaff. With these talented women as her guides, the young actress mastered the elements of fine form and design that would forever define her personal style, both on the red carpet and in her private life.

In time, she became a devoted client of haute couture from the houses of Chanel, Christian Dior, Valentino, Versace, and Yves Saint Laurent. She became both a patron and close friend of certain designers as well, including Gianfranco Ferré, Halston, Arnold Scaasi and Michael Vollbracht. But when asked if she considered herself a style icon, Taylor was quick to set the record straight, saying “Fashion icons are the geniuses I was fortunate enough to work with,” citing Valentino, Halston, Gianni Versace, Rose, Sharaff and Head as her greatest influences. Their designs and contributions to Elizabeth Taylor's inimitable style are all substantially represented in her fashion collection. A Valentino Red Velvet and Satin Ball Gown with Scarlet and Beaded Satin Evening Bag, The dress labeled "Valentino Couture", 1990s Estimate: $3,000-5,000. Photo: Christie's Images Ltd 2011
From the early 1960s through to the end of her life, Elizabeth Taylor reached for Valentino to celebrate the occasions most worthy of a show-stopping look. This 1990s era couture gown in the designer's signature shade of red is trimmed with a hem of velvet stars that mirror the deep cut-out of the velvet bodice. A Valentino bag covered in densely beaded flowers completes the look.

Additional Valentino Couture highlights in the collection include a 1960s era Valentino Couture gown of white raw silk with deep sleeves trimmed with a frill of silk velvet flowers (estimate: $3,000-5,000); the 1971 black lace stage gown with tiered skirts Ms. Taylor wore to the Rothschild Proust Ball in Paris (estimate: $1,500-2,000); and the elegant black chiffon evening gown and matching coat she wore to the 58th Annual Golden Globes Awards in 2001 (estimate: $3,000-5,000). Known for her love of animal motifs in both jewelry and fashion, Elizabeth Taylor also selected Valentino Couture for the 64th Annual Academy Awards in 1992, when she wore a stunning evening gown of ivory silk hand-embroidered with a sequined snow leopard across the bodice (estimate: $4,000-$5,000).

A Christian Dior White Organza Evening Gown Labeled "Christian Dior Printemps-Été 1987" Estimate: $4,000-6,000. Photo: Christie's Images Ltd 2011
Worn when accompanying Malcolm Forbes to the 70th anniversary celebrations for Forbes Magazine, Elizabeth Taylor looked radiant in this gown's black silk halterneck bodice overlaid with a deep collared shawl of white organza. While her wardrobe reveals a woman who fully embraced vivid color throughout her life, this gown is reminiscent of the all-white ensembles she favored for her break-out roles in The Elephant Walk (1954) and Cat on a Hot Tin Roof (1958), among others.

Additional Christian Dior ensembles include the complete evening look from the New York City premiere of Dr. Faustus in 1968, where Ms. Taylor wore an embroidered white dress with matching pink gazar kimono coat that comes with an alternate candy pink chiffon wrap (estimate: $6,000-8,000); and a scarlet chiffon gown worn to Buckingham Palace in 2010 to celebrate the dedication of the new Richard Burton Theatre at the Royal Welsh College of Music & Drama. A signed sketch of the dress by John Galliano accompanies the gown. A Tiziani Black Velvet "Scorpio" Evening Cape, Labeled "Tiziani Roma", 1968-9 Estimate: $2,000-3,000.  Photo: Christie's Images Ltd 2011
For Princess Grace of Monaco's 40th birthday “Scorpio Ball”, Elizabeth Taylor commissioned Roman dressmaker Tiziani to create this dramatic black velvet cape embroidered with diamanté scorpions on the front and on the hood. Though she was born a Pisces, Ms. Taylor was permitted to attend the ball – meant strictly for Princess Grace's fellow Scorpios – as the date of her husband Richard Burton, who shared the correct zodiac sign. At the time of the cape's commissioning, Karl Lagerfeld was Tiziani's freelance designer, and this eye-catching piece, exquisitely detailed with an ivory moiré silk lining, may well have been one of his designs. 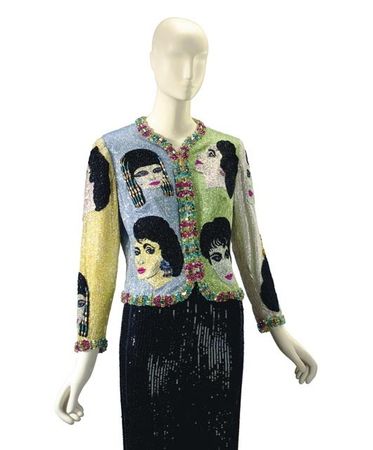 A Versace Beaded Evening Jacket, "The Face" Labeled "Atelier Versace", 1990s Estimate: $15,000-20,000. Photo: Christie's Images Ltd 2011
Elizabeth Taylor and Gianni Versace became fast friends in the 1990s. She was so enamored with his bold, colorful designs of the period that she acquired many pieces for her wardrobe, including three crystal-encrusted jackets from the designer's couture division, Atelier Versace. Known as "The Face", this rhinestone beaded evening jacket is arrayed with portraits of Ms. Taylor in her most famous roles. She wore it to 1992's “Glitter and Be Giving” Gala to benefit The American Foundation for AIDS Research (amfAR) and when she was honored the previous year by the Centre for Counseling and Psychology for her contributions in support of AIDS patient care. 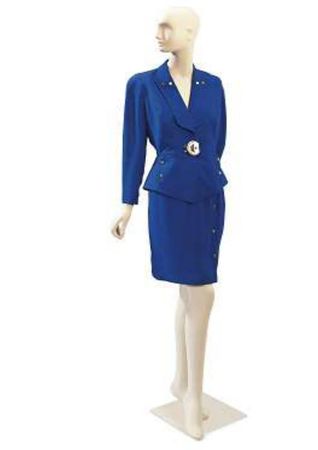 A Royal Blue and Silvered-Metal Suit Labeled "Thierry Mugler Paris", circa 1991, Estimate: $600-$800. Photo: Christie's Images Ltd 2011
With her innate sense of style and drama, Elizabeth Taylor carried off a ball gown like few others could, but she also wore high-fashion day looks with aplomb. This Thierry Mugler suit, worn for the New York press launch of her signature perfume "White Diamonds" in 1991, has the designer's signature sharp lines, strong shoulders and tiny nipped-in waist, accented her by a silver self-belt buckle and subtle stud detail. 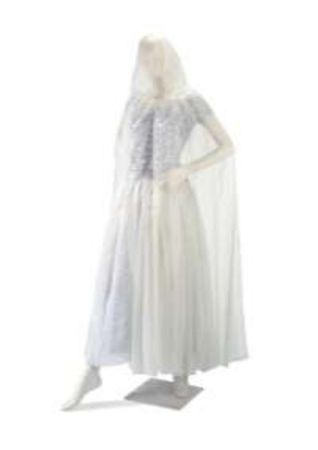 A Chanel Ballgown, Cape, Shoes, and Matching Clutch Bag Labeled "Chanel", 1960s, Estimate: $6,000-8,000. Photo: Christie's Images Ltd 2011
For the Royal Film Performance of The Taming of the Shrew, Princess Margaret appeared at London's Odeon Theatre to greet the evening's stars, including Elizabeth Taylor and Richard Burton. For this Royal event – one of several in Ms. Taylor's celebrated career – she held back nothing on the fashion front, adorning herself in ethereal head-to-toe Chanel to mark the occasion.

In addition to dresses, Ms. Taylor's collection includes over 25 Chanel handbags and a significant group of vintage Chanel costume jewelry, shoes, and belts, as well as exquisite handbag designs from the likes of Hermès, Fendi, Valentino, Gucci, Louis Vuitton and Prada. A Sunflower Yellow Silk Chiffon Wedding Dress, 1964, Worn to Ms. Taylor's first wedding to Richard Burton, Estimate: $40,000-60,000. Photo: Christie's Images Ltd 2011
On the joyous occasion of her marriage to Richard Burton, Elizabeth Taylor turned to Irene Sharaff, the Academy Award-winning costume designer who created her signature looks for the film Cleopatra, to create her wedding dress. Sharaff's diaphanous silk chiffon dress features long sheer sleeves, a draped cowl neck collar, and an empire waist accented by a delicate bow. Upon the collar, Ms. Taylor affixed the dazzling BVLGARI emerald and diamond brooch given to her by Richard Burton as an engagement present and topped it off with an elaborate headdress of hyacinths intertwined with a long braid of hair down her back.

This is one of two of Ms. Taylor's wedding dresses to be offered in the sale, the other being the dip-dyed ombré wedding gown by Gina Fratini, which she
wore to her second wedding to Burton in Botswana in 1975.