"David, Delacroix, and Revolutionary France: Drawings from the Louvre" @ the Morgan Library

"David, Delacroix, and Revolutionary France: Drawings from the Louvre" @ the Morgan Library 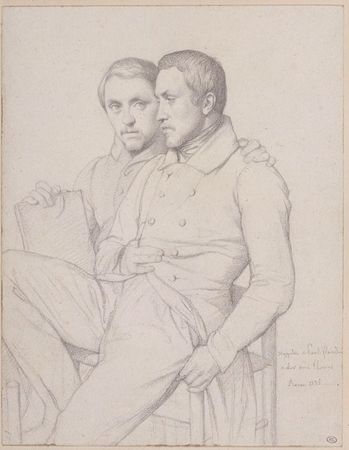 NEW YORK, NY.- This fall The Morgan Library & Museum hosts an exhibition of eighty of the Musée du Louvre’s finest drawings by artists working in France from the onset of the Revolution in 1789 through the establishment of the Second Empire in 1852. David, Delacroix, and Revolutionary France: Drawings from the Louvre, which runs through December 31, 2011, offers an unprecedented opportunity to experience the mastery of Corot, David, Delacroix, Géricault, Ingres, Prud’hon, and other celebrated artists of the era. The Louvre rarely allows so many major drawings from its famed collection to travel. The Morgan is the sole venue for this exhibition.

Throughout the late eighteenth and much of the nineteenth centuries, France was beset with seismic political, social, and cultural upheaval. The established royal order was overthrown and the country staggered through successive decades of radical regime changes, from republic to empire to constitutional monarchy and back again. These societal upheavals brought about dramatic changes in artistic style, subject matter, and patronage. A new vitality swept through Paris’s artistic community, and practitioners who are today considered among the most outstanding artists of their time—Corot, David, Delacroix, Géricault, Ingres, and Prud’hon—moved in important new directions. David, Delacroix, and Revolutionary France: Drawings from the Louvre chronicles this turbulent period, which yielded works that are considered among the most distinguished in the long history of French drawing.

“France’s revolutionary era witnessed the emergence of some of the greatest draftsman of all time, as two generations of artists invoked their skill to depict the people, events, and themes that shaped not only French history, but the future of Western civilization,” says William M. Griswold, director of The Morgan Library & Museum. “The names Corot, David, Delacroix, and Ingres are synonymous with artistic brilliance, and we are delighted the Louvre has partnered with us to make these superb works available for all to see. The Morgan is internationally recognized for its drawings collection, and in the 1990s we lent more than one hundred masterworks to the Louvre for an exhibition. We are pleased now to be able to show some of the Louvre's outstanding drawings."

Jacques-Louis David’s stunning The Sabine Women Intervening to Stop the Fight between the Romans and Sabines attests to the artist’s reliance upon elaborate compositional studies in preparation for his large-scale paintings. David pasted patches of paper on this sheet to rework key passages, and the end result is very close in composition to the final painting, now in the Louvre. David’s attention to every detail of his vast, complex paintings is expressed in a study of Napoleon, which records one of the artist’s early ideas for the figure of the emperor in a depiction of his coronation. Napoleon clutches his sword to his heart as he crowns himself while the Pope looks on. Ultimately this depiction of the emperor’s brazen act was rejected, and the subject of David’s painting became the crowning of Empress Josephine.

A favorite of the Empress Josephine, Pierre-Paul Prud’hon is well represented with a ravishing study in his signature black and white chalks on blue paper depicting the luscious form of Psyche borne aloft. The sheet is a study for his painting The Rape of Psyche. Prud’hon’s renowned Portrait of Constance Mayer depicts his lover and artistic collaborator during their happy years, before their relationship turned tragic and she committed suicide. Also on view is one of the artist’s acclaimed academic nudes, beautifully worked and revealing a new naturalism.

The inventive genius of Anne-Louis Girodet de Roucy-Trioson is exemplified by several remarkable sheets, including the large Injured Turk, Falling Backward—a study for a single figure in his chaotic painting the Battle at Cairo—notable for the figure’s dramatic pose and colorful costume, and worked in pastels. Girodet’s compelling portrait of the printer Firmin Didot captures his friend in the guise of a Romantic genius, heralding a new era. The work of another pupil of David, Francois-Marius Granet, reveals the importance of Rome for French artists, with his atmospheric, heavily washed panorama of the view from Piazza Trinità dei Monti; his expert handling of watercolor is represented in two examples executed after his return to Paris.

Strikingly original is Théodore Géricault’s richly worked drawing of his own left hand. The artist executed the sheet while on his deathbed, and it epitomizes the Romantic movement’s increasing interest in the close study of the human body. His Scene of Combat: The Battle of Prince Eugène testifies to the exploration of subjects from recent French history, here in a manner deeply informed by the artist’s time in Italy. He depicts, with classical grandeur and in dramatic chiaroscuro, two figures on horseback in direct conflict, silhouetted and frozen in action. He used a similar technique for his lush meditation on an erotic mythological subject, Leda and the Swan. The artist’s masterful watercolor Five Horses at the Stake reveals Géricault’s love of that quintessential Romantic subject, the horse. Another artist active in Italy, Camille Corot, is famed for his views of the Roman Campagna and Fontainebleau. Here he also displays his talent for depicting the human figure in Nude Girl Crouching in a Landscape, in which a vulnerable girl self-consciously draws her knees to her chest as she shyly averts her gaze. Her body, with its contours defined by an assertive, dark line, rests in a loosely and abstractly rendered landscape.

The greatest master of portraiture, Ingres, is featured with a substantial group of works, including a famous, meticulously detailed drawing of Louis-François Bertin, founder of one of the most influential French newspapers of the first half of the nineteenth century. Both the drawing and the related painting are regarded as exceptional portraits of the triumphant bourgeoisie during the reign of Louis-Phillippe I (r. 1830–48) and represent the height of Ingres’s talent in the genre. In addition to an excellent selection of portraits, including a self-portrait, there are two studies for the artist’s major late canvas, The Turkish Bath.

Each reveals a different aspect of Ingres’s draftsmanship, from a confident pen sketch for the composition to a large sheet of black chalk studies exploring the poses of the nude bathers clustered in an interior. Following in Ingres’s wake, the brothers Hippolyte and Paul Flandrin portrayed themselves on the same sheet in a masterpiece of double self-portraiture that emphasizes the older master’s legacy. One of the most important paintings by Eugène Delacroix is The Death of Sardanapalus, also at the Louvre. A sheet of preparatory studies related to the canvas captures the energetic development of key figures in the scene. The artist’s vigor and the striking fluency with which his hand moved across the page distinctively evoke a work in the making. Delacroix’s Study for Liberty Leading the People depicts an early idea for the iconic painting’s central figure. In this rough sketch, she is represented as a bare-breasted woman, lunging forward, arm raised as she leads the charge across the barricades. Animated by a sinuous movement and the exaggerated torsion of her hips, Liberty seems to leap off the page. A poignant watercolor of Christ in the Garden of Olives serves as a testimony to the skeptic Delacroix’s capacity for emotional intensity and human drama.

Honoré Daumier’s aptitude for naturalism is expressed in a rare early drawing, Head of a Young Woman, Turned Three-Quarters to the Right. The sitter’s dress and features suggest that she belongs neither to the realm of the studio nor to the world of bourgeois portraiture, but rather to the prosaic sphere of the working and middle class. A ribald Centaur Abducting a Woman reveals a more robust side of Daumier’s oeuvre and displays the full force of his agitated, energetic draughtsmanship. Exceptional works by artists active at midcentury include a vivid and dramatic watercolor of the ancient poet Sappho about to hurl herself off a precipice in despair executed by Théodore Chassériau, who inherited the Romantic fascination with tragic heroines from the past. 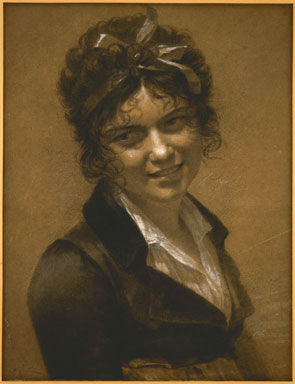