Photo Bonhamsrimless, decorated in shades of cobalt-blue and green with vines bearing three bunches of grapes, a frieze of leafy floral vines around the sides, the rim with zig-zag border, verso with a wide band of leafy floral vine; 32.5 cm. diam. Sold for £15,000

Note: According to Atasoy and Raby, "most of the 'Grape' dishes from the second half of the 16th Century, including the ones with relief-red, did not have everted rims and wave-and-rock borders, but use another shape, the rimless saucer-shaped dish" (Nurhan Atasoy and Julian Raby, Iznik: The Pottery of Ottoman Turkey, London, 1989, p. 124).

The 'grape' design is derived from Chinese Yuan and Ming blue and white porcelain that entered the Ottoman court in the early 16th Century. Following Sultan Selim I's conquests of Tabriz in 1514, and Damascus and Cairo later in 1517, large quantities of Chinese porcelain and celadons were acquired to adorn the court rooms. As a result, Iznik potters had access to a whole spectrum of designs that they had not encountered before. Among the most popular designs was the 'grape' design.

Comparison can be drawn with a much earlier dish dated to circa 1530, sold in these rooms (Bonhams, Islamic and Indian Art, 28th April 2005,
lot 422). The latter illustrates how closely the Iznik potters copied Chinese porcelain when they first encountered it. However, as time passed, the Iznik potters became more confident and broke away from the direct imitation of Chinese porcelain. 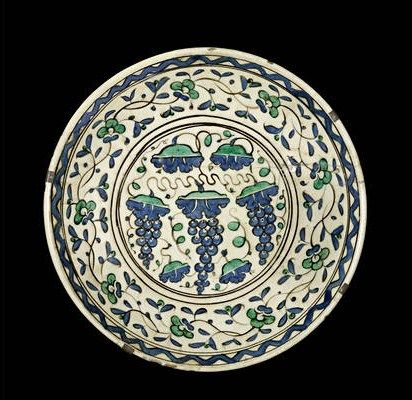 An Iznik pottery Dish. Turkey, circa 1575. Photo Bonhams
rimless, decorated in cobalt-blue and green with black outlining on a white ground, the centre with a roundel containing three bunches of grapes within concentric bands, the sides with a trailing floral vine, the border with an undulating band, the exterior with a frieze of stylised floral motifs, foot-ring drilled; 29 cm. diam. Sold for £8,750
Provenance: private Greek Collection formed in the 1930s.

Note: This dish is a polychrome example of a type better known in blue and white. A similar dish, but with the addition of red, was sold at Christie's (Important Islamic, Indian, Himalayan and South-East Asian Art, 24th April 1990, lot 402); and another in the Musee national de la Renaissance, Chateau d'Ecouen, Frederic Hitzel and Mireille Jacotin, Iznik. L'Aventure D'Une Collection, Paris, 2005, p. 61, no. 16). decorated in polychrome on a white ground, depicting hyacinth, tulip and rose sprays emanating from a leafy stem, the border with triangular sections with a half flowerhead, verso with a frieze of abstract floral motifs; 31 cm. diam. Sold for £3,750 with a sloping rim, underglaze, decorated in cobalt blue, raised red, green and black on a white background with carnations, tulips and prunus branch issuing from a leafy tuft, the rim with rock and wave design; 30 cm. diam. Sold for £3,750 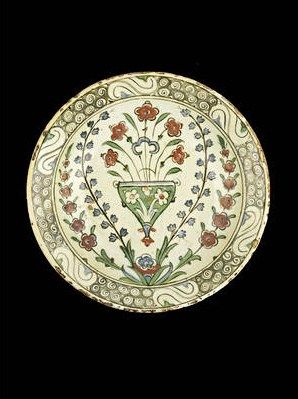