Ming Blue & White porcelains made for the Islamic market

Ming Blue & White porcelains made for the Islamic market 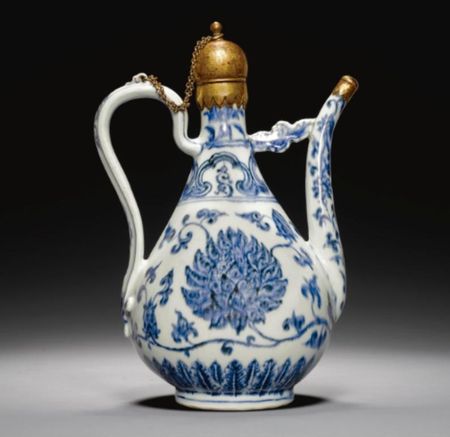 of pyriform form with a bulbous base and tapering neck supported on a narrow ring foot, the sloping shoulder with serpentine handle and spout with attached foliate bracket, the spout and neck terminating in a domed and arcaded tombak mount with detachable cover and chain, the porcelain body decorated in underglaze cobalt blue reserved on white with two large lotus palmettes issuing scrolling tendrils with split and full palmette buds, the neck decorated with an arcade of clouciband clips, the underbelly with a register of overlapping leaves, the spout and handie with foliate scrolis and floral sprays porcelain arid metal; 30.4cm. height. ESTIMATE 150,000-200,000 GBP. Lot 348 Sold: 181,250 GBP

NOTE: Yongle period ewers of this type are extant in various museums and private collections worldwide. The present example is particularly unusual for its decoration incorporating a large-bloomed lotus scroil amid leaves painted on either side of the vessel. The motif to the base cf the ewer, comprising a register of upright leaves, s also rare, making this piece a unique example amongst this weil-known group cf early fifteenth-century ceramics.

A comparable early-fifteenth-century Ming dynasty ewer with Ottoman mounts is in the Topkapi Saray Museum (see Roxburgh 2005, pp.3l 0-1 1, no.273). The distinctive pear-shaped form with bracketed spout is aise seen in three early-fifteenth-century Ming ewers that were in the Ardebil shrine, now in the National Museum in Tehran (see Pope 1981, p154). A similar pattern of monumental Iotuses and palmette tendrils can also be found on an early-fifthteenthcentury vase and bowl from the Ardebil shrine (ibid. pls.49, 51). 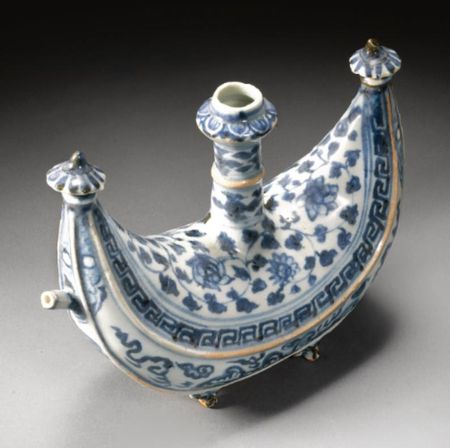 NOTE: A fifteenth-century Ming dynasty flask in the National Museum of Indonesia in Jakarta that was found in Bukittingi, West Sumatra possesses an almost identical pattern cf lotus scroils to the upper body and cloudband waves below (see Robert Finlay, The Pilgrim Art, Cultures of Porcelain in World History, p299). A similar flask is also illustrated by S. T. Yeo & Jean Martin in Arts Orientalis, Singapore, South East Asian Ceramics Society and National Museum Singapore, April 1978, no.28. From the thirteenth century onwards the majority of high-quality underglaze cobalt blue porcelain was produced by the Jingdezhen kilns of Jianxi province. At the end of the fourteenth century, the Hongwu emperor (r.1368-98) conducted a mission to Southeast Asia, where he arrived bearing diplomatic gifts including 13,000 pieces of porcelain. By the beginning of the fifteenth century under theYongle emperor (1403- 25) and then Xuande emperor (1426-35), China became increasingly aware of the demand and requirements of the Muslim world. lslamic glass and metal work forms began to influence the shape and patterns used by the Ming potters. This extremely rare crescent-moon flask derives its shape from the metal kashkul and would have been made for the Islamic market. For a comprehensive discussion on kashkuls see A.S.Melikian-Chirvani, 'From the Royal Boat to the Beggars BowI’, in: Islamic Art IV 1990-1991, The lslamic Art Foundation, New York, 1992.