"Caravaggio and His Followers in Rome" @ the Kimbell Art Museum

"Caravaggio and His Followers in Rome" @ the Kimbell Art Museum 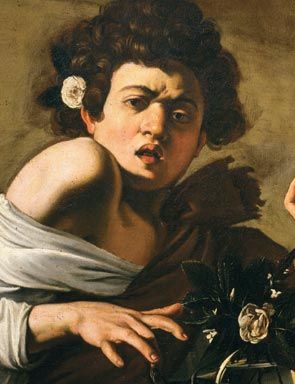 FORT WORTH, TX.- Caravaggio and His Followers in Rome opens October 16, 2011, at the Kimbell Art Museum, its only U.S. venue. Electrifying in his originality, Michelangelo Merisi da Caravaggio (1571–1610) was a controversial genius whose short life was rife with conflict and who, in just the last half-­‐century, has reemerged as one of the most celebrated artists of all time. “Caravaggiomania,” as described in a 2010 article in Art in America, has resulted in an extensive array of films, books, and commercial products that bear his name and images.

“Before Caravaggio’s paintings were inspiring filmmakers and adorning wine bottles and jars of pasta sauce,” commented Eric M. Lee, director of the Kimbell Art Museum, “they were emulated and studied by his contemporaries. ‘Caravaggiomania’ was born in the 17th century, when patrons and artists alike became captivated by the emotional drama and approachable realism in his paintings. This exhibition is a rare opportunity to view some of Caravaggio’s greatest works alongside those of influential Baroque painters who imitated his style.”

Shown only in Ottawa and Fort Worth and organized by the National Gallery of Canada and the Kimbell, Caravaggio and His Followers in Rome explores the profound influence that the artist had on some of the greatest masters of European Baroque art. The exhibition brings together 10 of Caravaggio’s most celebrated paintings alongside more than 40 others that they inspired, including works by Orazio Gentileschi, Bartolomeo Manfredi, Jusepe de Ribera, Georges de La Tour, Valentin de Boulogne, Simon Vouet, Gerrit van Honthorst, Hendrick ter Brugghen, and Peter Paul Rubens—artists whose imaginations were indelibly impressed by Caravaggio’s sense of drama, monumentality, and humanity. It is the second largest display of Caravaggio’s paintings ever showcased in the U.S. Only the 1985 Metropolitan Museum of Art exhibition showed more works by Caravaggio, and since then numerous important discoveries have been made, including the Kimbell’s Cardsharps, which was discovered in a European private collection in 1987.

Not since Michelangelo or Raphael had one artist affected so many of his contemporaries and so irrevocably changed the course of European painting. Caravaggio created a new kind of art: dramatic, deeply emotional, grounded in the vivid details of everyday life, and overwhelmingly human. He used live models, sometimes prostitutes and the very poor, who posed in the studio for his powerful religious scenes as if the events were happening on the streets of Rome. Breaking the boundaries between art and life, he overturned the artistic conventions of the day. He played down details of the setting of a scene, focused on the expressive human figure, and invented a brand of stark realism that shocked many of his patrons.

Trained in the realistic traditions and culture of religious reform of his native Lombardy in the north of Italy, the young Caravaggio settled in Rome in 1592. After a few years of struggle and poverty, he attracted the attention of some of the most prominent patrons in the city, securing prestigious commissions that quickly earned him fame. Artists and connoisseurs alike were drawn to his extraordinary talent. He remained in Rome until 1606, when he was forced to flee after killing a rival. It was but the most extreme manifestation of his volatile and violent personality. Moving between Naples, Malta, and Sicily, he continued to paint profoundly moving canvases until his tragic early death in 1610, at the age of 38. The 400th anniversary of his death, in 2010, drew the attention of global audiences, with exhibitions in Italy that reconfirmed his legacy and the remarkable power of his art.

This exhibition will show how artists working in Rome in the first three decades of the 17th century—depending on talent and temperament, cultural background and artistic formation—explored different aspects of Caravaggio’s art. Like him, they often painted figures at close vantage point with strong lights and deep shadows in a dark, indeterminate setting to create a poetic or dramatic mood. Many artists emulated his working method, painting without working out the composition beforehand in a series of drawings. Some were attracted to Caravaggio for a relatively brief period before they developed their own distinctive styles; others may be considered followers in the more traditional sense.

The exhibition explores the full range of Caravaggio’s work: from the theatrical and worldly to the deeply spiritual, from the poetic and lyrical to the highly dramatic. It brings out both his virtuoso technique and the radical new ways in which he could conceive a given subject. The exhibition will focus on several themes—early youths and musicians, fortune tellers, cardsharps and tavern scenes, individual saints and religious
compositions—revealing how Caravaggio’s example inspired other artists both to reinterpret standard subjects and to tackle unusual ones. In every section Caravaggio will be juxtaposed with a specifically chosen group of painters, inviting the viewer to discover and explore a wide range of artistic dialogues.

The lending museums include the Louvre, Paris; the Uffizi, Florence; the Vatican Museums, Vatican City; the Prado Museum, Madrid; the National Gallery, London; the Metropolitan Museum of Art, New York; the National Gallery of Art, Washington; and other major collections throughout Europe and North America. 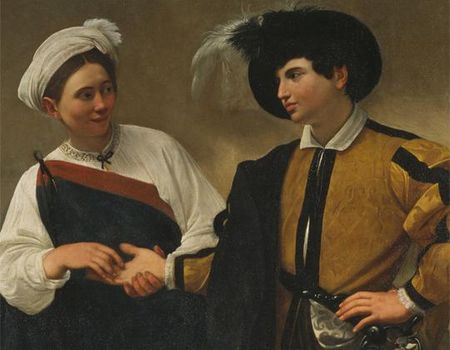 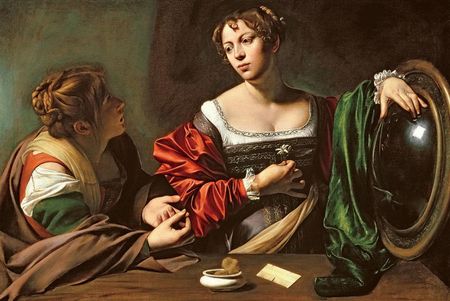 Caravaggio, Martha and Mary Magdalene, c. 1598, oil and tempera on canvas. Detroit Institute of Arts. Gift of the Kresge Foundation and Mrs. Edsel B. Ford.