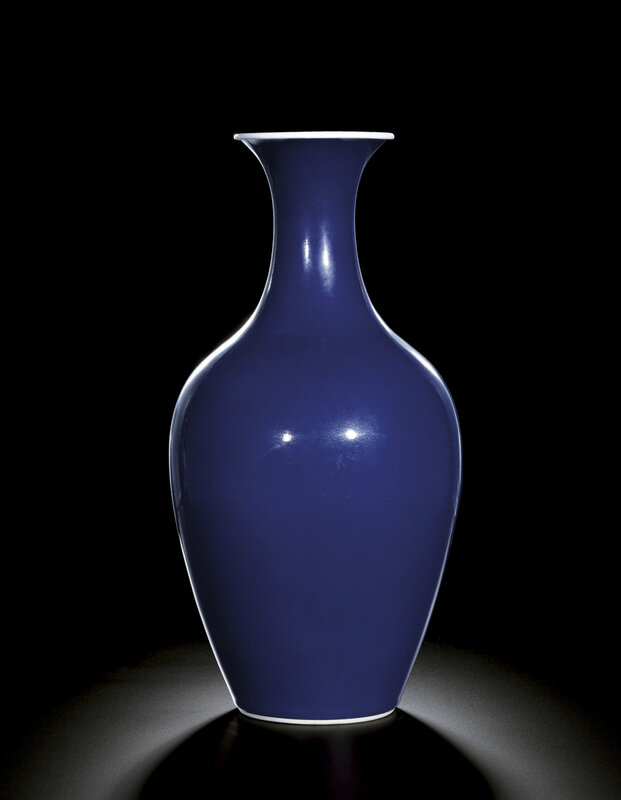 the slender ovoid body surmounted by a tall waisted neck flared towards the rim, covered overall with a rich purplish-blue glaze leaving a white edge around the rim, the interior and base glazed in white.

Note: It is extremely rare to find Yongzheng vases of this shape and glaze; see a closely related Qianlong example of smaller proportions, in the Huahaitang collection, included in the exhibition Ethereal Elegance. Porcelain Vases of the Imperial Qing, The Chinese University of Hong Kong, Hong Kong, 2007, cat. no. 17. For a Yongzheng vase of this form, painted with chrysanthemums and butterflies in famille-rose enamels, see one sold in our London rooms, 1stfamille-rose enamels, see one sold in our London rooms, 1st April 1974, lot 353, and again in these rooms, 29th November 1977, lot 158; and a smaller example, but covered in a celadon glaze, offered in our London rooms, 16th May 2007, lot 109.

In form, the present vase is reminiscent of Yongzheng vases carved in relief with a tall band of petal lappets at the base, seen in an outline drawing published in Geng Baochang, Ming Qing ciqi jianding, Hong Kong, 1993, p. 234, pl.400, fig. 12; and a blue and white example, in the Palace Museum, Beijing, illustrated in Kangxi. Yongzheng, Qianlong. Qing Porcelain from the Palace Museum Collection , Hong Kong, 1989, p. 175, pl. 4.