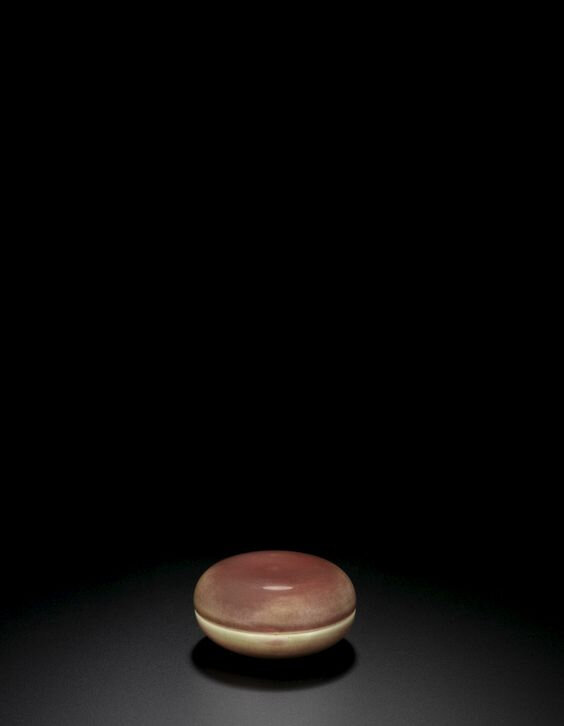 of entirely plain compressed circular form, the domed cover of pinkish tone shading to a light mushroom colour around the sides and on the upper part of the box with a hint of characteristic green, transmuting to a pale liver colour towards the base, the footrim with a neatly finished groove around the outer edge, inscribed on the underside with a six-character reign mark in underglaze-blue.

Note: Also known as the yinse he ('seal colour box'), or 'vermillion box', the present piece is one of the eight peachbloom wares made for the scholar's table as discussed in Ralph Chait, 'The Eight Prescribed Peachbloom Shapes Bearing K'ang-Hsi Marks', Oriental Art, Winter 1957, vol. III, no. 4, pp 130-137.

Similar seal boxes can be found in the Metropolitan Museum of Art, New York, illustrated in Suzanne G. Valenstein, A Handbook of Chinese Ceramics, New York, 1989, pl. 138; in the Palace Museum, Beijing, published in Kangxi.Yongzheng. Qianlong. Qing Porcelain from the Palace Museum, Hong Kong, 1989, p. 141; and in the National Palace Museum, Taipei, included in the museum's Special Exhibition of K'ang-hsi, Yung-cheng and Ch'ien-lung Porcelain Ware from the Ch'ing Dynasty, Taipei, 1986, cat. no. 11. Compare also one sold in these rooms, 17th December 1996, lot 115, and later sold again at Christie's Hong Kong, 28th April 2003, lot 569.

Commentaires sur A peachbloom seal-paste box and cover, Mark and period of Kangxi (1662-1722)