NEW YORK, N.Y.- The Morgan Library & Museum is internationally acclaimed for its collection of medieval and Renaissance illuminated manuscripts, but it may come as a surprise that it also possesses a number of important Islamic manuscripts dating from the late middle ages to the nineteenth century. They include such treasures as a thirteenth-century treatise on animals and their uses, regarded by some experts as one of the greatest of all Islamic manuscripts, and a rare, illustrated translation of the life of the celebrated Persian poet and mystic, Mevlana Jalal al-Din Rumi.

Beginning October 21, 2011 and running through January 29, 2012, these works, along with almost ninety additional manuscripts, single illuminated pages, and beautifully handwritten Qur’ans, will go on view in Treasures of Islamic Manuscript Painting from the Morgan. It is the first time the Morgan has gathered these spectacular volumes together in a single exhibition, and several are disbound, permitting visitors to view a selection of miniatures from them.

“Pierpont Morgan, the museum’s founder, was interested in art of the Middle East,” said William M. Griswold, director of the Morgan. “He collected ancient Near Eastern cylinder seals and tablets, which are now exhibited in the recently restored McKim building, and later began to acquire manuscripts from the Islamic period. The works on view in this exhibition are extraordinary examples of illumination and calligraphic expertise and demonstrate an artistic sophistication of the highest order.”

Islamic Manuscripts
The earliest illustrated manuscript in the exhibition is a late-thirteenth century treatise on animals and their uses, Ibn Bakhtishu’s Manafi -i hayavan (Uses of Animals) that was regarded by scholar Richard Ettinghausen as one of the ten greatest Islamic manuscripts. The amazing miniatures reflect the new naturalistic Chinese style that was introduced as a consequence of the Mongol invasion.

Another especially notable manuscript because it is one of only two known copies is a Turkish translation of Aflaki’s life of Mevlana Jalal al-Din Rumi, the great Persian poet and mystic, who today continues to be among the most widely read poets in the world. The translation, by Darvish Mahmud Mesnevi Khan, was made in Baghdad in 1590 and was commissioned by Sultan Murad III. It includes material not found in the Persian original and is the most richly illustrated copy (the other is in the Topkapi Museum in Baghdad). Because it is disbound, visitors will be able to see for the first time a wide selection of its fascinating miniatures—one even depicts the Prophet Muhammad, his face veiled, reading the poetry of Rumi. The work was purchased by Pierpont Morgan in 1911, and is considered the masterpiece of the Baghdad school of painting, which flourished under the Ottoman rule of the late-sixteenth and early-seventeenth centuries.

Another richly illustrated Turkish manuscript with stunning miniatures is a treatise on astrology, wonders of the world, demonology, and divination made about 1582 for Ayisha Sultan, the daughter of the same Ottoman Sultan Murad III who commissioned the translation of the Aflaki life of Rumi.

Nearly two dozen individual miniatures come from two disassembled albums once owned by Sir Charles Hercules Read, who was keeper of British and Medieval Antiquities at the British Museum from 1896-1921. The Persian Album was assembled by Husain Khan Shamlu, governor of Herat (r. 1598-1618), who, after Shah Abbas, was the most powerful man in Persia. Many of its miniatures were made in Herat itself. Especially remarkable are paintings of secular subjects, including a young lady reclining after her bath. The Mughal Album is particularly rich in depictions of Mughal rulers, such as Babur (1526-1530), founder of the Mughal dynasty in India, and some of his successors, such as Akbar (1556-1605), Jahangir (1605-1627), and Shah Jahan (1628-1658), builder of the Taj Mahal. Belle da Costa Greene, Pierpont Morgan’s librarian, was instrumental in acquiring the miniatures in 1911, some of which she first saw, with Bernard Berenson, at the great exhibition of Islamic art in Munich in 1910. The exhibition convinced Belle Greene (and through her, Morgan) that Islamic art should also be represented in the collection.

The Qur’an
Just as the Qur'an is central to Islamic life, a gigantic luxury Qur'an takes center stage at the beginning of the exhibition. The work, originally in one volume, was made in Shiraz about 1580. Although its historical first destination is unknown, it was later, in 1719-20, presented by Sultan Ahmed III to the mosque of Jerrah Pasha in Dikili Tash in Istanbul.

In addition to this work, there are two other cases with Qur'ans or Qur'anic leaves. One case contains the earliest Qur'ans, all on vellum and in an oblong format, reflecting the expansive character of Kufic script (spanning ninth to eleventh centuries). The other case contains Qur’ans in a vertical format and more upright script that became the rule from the fourteen to the nineteenth centuries with the advent of paper.

After Pierpont Morgan died in 1913, due to Belle Greene’s influence, Morgan’s son, J.P. Morgan, Jr., also purchased some early Qur’ans. Greene, herself, was to make important additions to the collection, and in 1950 bequeathed a number of Qur’anic leaves and manuscripts to the Morgan. 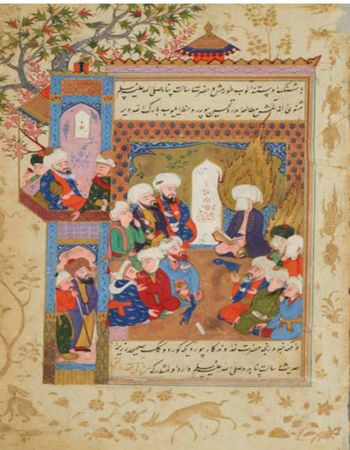 A Vision of Muhammad Reading Rumi's Masnavi (Couplets) . From "A Translation of Stars of the Legends," mostly about the life of Rumi, in Turkish. Baghdad, 1590s. MS M.466, fol. 156. Purchased by Pierpont Morgan, 1911. Photography: Graham S. Hab 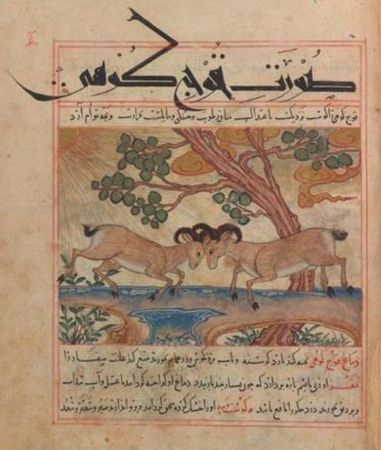