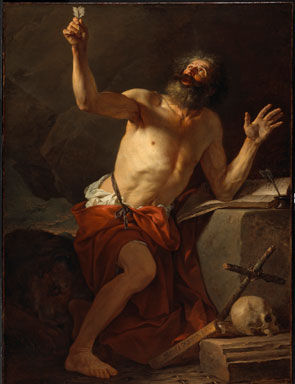 Jacques-Louis David, St. Jerome, 1779. Collection of the Council of Churchwardens, Notre-Dame de Québec, on deposit at the Museum of Civilization, Quebec City

OTTAWA, ON.- Since the Renaissance, Rome has attracted generations of painters and sculptors. Eighteenth–century Rome was a main crossroads for the European community and a major source of cultural influences. It was a favoured destination, not only for French artists, but for art lovers and connoisseurs. Until 2 January 2012, the National Gallery of Canada, in collaboration with France 's Musée des beaux-arts de Caen , presents Drawn to Art: French Artists and Art Lovers in 18th Century Rome . This exhibition will allow visitors to discover the Eternal City 's influence on the work of French artists during a period in which artists, patrons, politicians and other members of the elite lived at close quarters, united in their love of art.

"Rome has always been a special place for artists from all over the world, and the artists of 18th century France were no exception," said NGC director Marc Mayer. "The cultural hub of Europe, the Eternal City gave early impetus to the careers of a number of celebrated French artists such as Hubert Robert, Jean-Honoré Fragonard, and Jacques-Louis David, who brought back from their sojourns indelible images whose power still operates today. We’re pleased to announce that this exhibition will also be seen at the Musée des beaux-arts de Caen , a major partner in the enterprise and whose collection includes some fine examples of this period."

Drawn to Art brings together some 134 works – drawings, prints and paintings – divided into five themes: Academic Training, Art Lovers, Patrons and Artists, The Landscape of Rome and its Surroundings, Rediscovering Antiquity, and Celebrations and Festivities. Many of these exceptional works, which come from leading North American and European institutions, have never been shown in North America . The exhibition includes 25 works from the NGC collection as well, including twenty or so outstanding works by Hubert Robert, Jean-Honoré Fragonard and Joseph Vernet.

Special care for fragile objects
The exhibition also includes many rare albums, which are shown in vitrines due to their fragility. Thanks to HP Canada's TouchSmart technology, visitors can "flip through" electronic versions of five of these albums on a multi-touch screen, including an album of drawings by Joseph-Marie Vien, a collection of engravings by Jean Barbault (Les plus beaux monuments de Rome ancienne,1761), and Recueil d’antiquités égyptiennes, étrusques, grecques et romaines (1752-1767), a collection of prints grouped together by Anne-Claude-Philippe de Tubières, Comte de Caylus. The NGC wishes to thank HP Canada for its generous contribution, which has made this interactive experience possible.

A rich period
With the founding of the Académie de France à Rome in 1666, Rome became a mandatory destination for any serious young artist. The tradition continued in the 18th century, with several students of the Académie royale de peinture et de sculpture receiving the Grand Prix de Rome and attaining the status of pensionnaire of the Académie romaine, where they stayed for approximately four years. Instruction was primary based on copying the old masters and antiquities, but also on drawing in situ, both nudes and surrounding landscapes.

This period produced many drawings of various techniques, prints and fascinating paintings. "The variety of techniques used by the artists shows how they were trained to master their art during their stay in Rome ," Sonia Couturier, exhibition curator and NGC associate curator, writes in her article in the fall issue of the NGC's magazine, Vernissage.

The Roman countryside: A constant source of inspiration
The Roman countryside was a constant source of inspiration to painters and draughtsmen looking for picturesque scenery. This attraction was expressed in different ways by these artists. While the idyllic, pastoral vision of Jean-Honoré Fragonard or Hubert Robert is evident, others looked more objectively at the area's geography and inhabitants. At the same time, the work of some, such as Adrien Manglard, Claude-Joseph Vernet and Pierre-Henri de Valenciennes, was influenced by atmospheric studies and gave new impetus to landscape art.

Patrons and artists
Many exhibition works point to the presence of French art tourists in Rome . For this reason, Drawn to Art explores certain aspects of the social and cultural network through which artists, patrons and knowledgeable art lovers mixed. There was a constant influx of foreigners, including many French art lovers, wishing to round off their education. The Marquis of Vandières (future Marquis of Marigny and director general of the Bâtiments du Roi), the Abbé de Saint-Non, Claude-Henri Watelet and Bergeret de Grandcourt stand out among this community of visiting art lovers which gave life to the most promising talents of the day.

Thus, Rome became a breeding ground for the neo-classicism which flourished during the final decades of the 18th century across Europe . While many artists were drawn at times to the faithful reproduction of established classical motifs, there was nevertheless a desire to transcend these same models. This approach towards classical art lead to the creation of a new imaginative vision evident among many, including Clérisseau, Robert and Saly.

Celebrations and festivities
The French artists in 18th century Rome enjoyed a certain visibility in this particulary cosmopolitan environment. Of note are the extraordinary festivities held by the pensionnaires of the Académie, Turkish or Chinese masquerades, depicted in the drawings and paintings of Jean Barbault or the respective engravings of Joseph Marie Vien and Jean-Baptiste Marie Pierre. In a completely different vein, the eager involvement of the French artists in preparing and depicting the Chinea, celebrated annually since the reign of Pope Clement IV (in 1265) to mark the subordination of the kingdom of Naples to the papacy, should also be mentioned. Prints by Jacques-Louis Le Lorrain or Pierre Parrocel show set pieces from this sumptuous feast illuminated by fireworks.

NGC associate curator, European Art, Sonia Couturier has been involved in the care and development of the Gallery's drawing and print collections since 2001. She received her PhD from Concordia University in Montreal and has studied the participation of French art lovers in 18th century intellectual circles. She is responsible for the acquisition of many drawings and prints (pre-1800, from all schools), particularly from the 17th and 18th century French School . In addition to writing articles on the collection's drawings for the National Gallery of Canada Review and contributing to the Drawing Attention catalogue (Art Gallery of Ontario, 2008), she wrote the catalogue for the exhibition French Drawings from Canadian Collections (2004). She is curator of the exhibition Drawn to Art: French Artists and Art Lovers in 18th Century Rome (NGC, Ottawa , 2011; MBA Caen, France, 2012), for which she edited the catalogue. 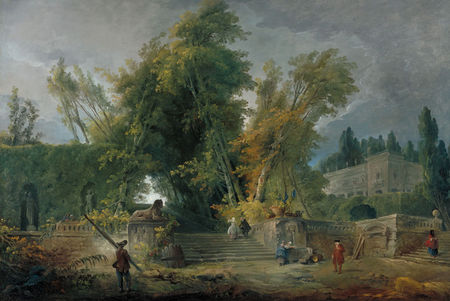 Joseph-François-Pierre-Ignace Parrocel, Perspective View of the First Machine Representing Neptune and Other Divinities: Allegory from the Celebrations of the Chinea, Rome, in 1738  1738.  Etching on ivory laid paper,  42.5 × 51.4 cm.    National Gallery of Canada, Ottawa (41449)  Photo © NGC