The relatively heavy rhinoceros horn cup is depicting an intricate and dramatic landscape scenery with torrents and tumultuous waves, a lake and a man punting forward his raft with a long pole against the current and wind blown waves among reeds and along the shore. The masterly and delicate carving renders and realises successfully the dramatic composition and scenery in every tiny detail. Inside, below and parallel to the rim are incised on the plain surface a two lines inscription with ten characters including a cyclical date, together with the signature "Wenshu" and a seal. Furthermore on the bottom of the cup is carved in low relief the square seal of Wenshu with six characters reading "Shengya yipian qingshan" ("My lonely life in this world"). The signature and seals of Zhou Wenshu are possibly authentic, the cyclical date could correspond to the year 1641, a date matching to his supposed dates of life somewhere between c. 1550 and 1660 as estimated by Jan Clapman on p. 142 -

Property from an important old German Academic family collection, bought in China in the late 19th or early 20th ct. 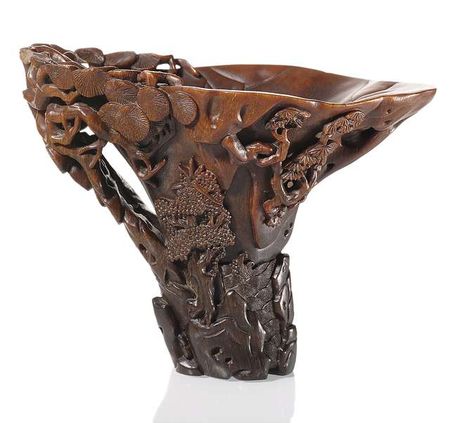 The cup is excellently carved and decorated with steep mountain scenery with trees, particularly pine trees, and a waterfall with a scholar sitting on a rocky cliff admiring the waterfall. The rich brown colour of the horn changes gradually to a dark brown at the foot. At the rear side of the cup some torn branches of a pine are growing over the rim and hanging partly free into the inside of the cup which had been shaped to stylised rock formations.

Property from an important old German Academic family collection, bought in China in the late 19th or early 20th ct. 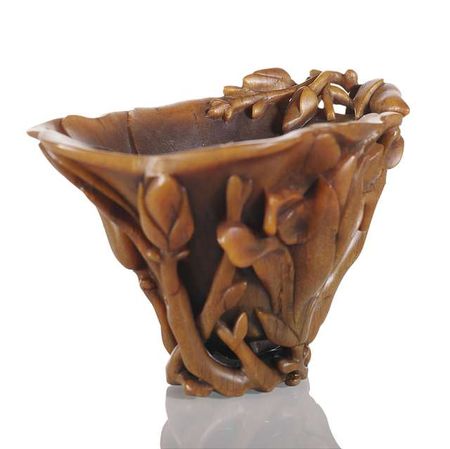 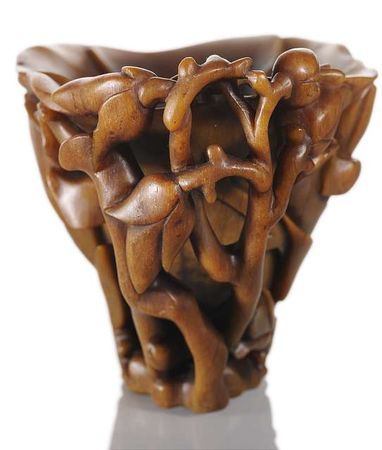 Property from an old German private collection, bought in China around 1900