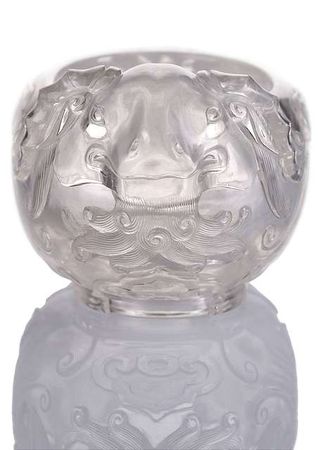 The stone of nearly flawless clarity, carved in the form of an archaic goat standing foresquare and hollowed to form a vessel, possibly a censer or a brushwasser. The deep crompressed body carved in high relief with stilized scrolling plumage. The base is incised with the four-character Jiaqing yuwan seal mark. L. 14 cm. Estimate 40 000 / 60000 €

Ewers fashioned out of rock crystal are rare although an example in the shape of the archaic bronze guang, with a cover, and carved with clambering chilong is illustrated in Zhongguo yuqi quanij, vol. 6, Shijiazhuang, 1993, pl. 44.

The present vessel is characteristic of products made in the Imperial Palace Workshop (Zaobanchu) located in the Forbidden City. The wheel-cut four-character reign mark is typical of the Palace Workshops, appearing across a range of wares made for the Qianlong and Jiaqing emperor and
the Imperial Household.

One of the earliest records on rock crystal dates from the Tang dynasty (618-907) where it is mentioned as a product of 'water turned to stone' and 'a beautiful material imported from Persia', hence the Chinese name shuijing, 'the brilliance of water'. Historically rock crystal has been popular with the literati who associated clear crystal with 'plain beauty' and had various scholars objects made of this material. However the majority of rock crystals are of the 18th century, and the pieces produced during the Qianlong period are most outstanding for their quality of carving and purity of the stone.

For examples of rock crystal carvings see a cup and a vase, both from the Qing Court collection and still in Beijing, illustrated in The Complete Collection of Treasures of the Palace Musseum. Treasures of Imperial Court, Hong Kong, 2004, pls. 22-3. Compare also a brushpot with the four-character Qianlong yuyong (Made for the Imperial Use of the Qianlong Emperor) mark, attributed to the Palace Workshops, included in the Fung Ping Shan Museum exhibition. Arts from the Scholar's studio, Hong Kong, 1986, cat.no. 130. Ewers of similar form can also be found made of jade; for example see one illustrated in Zhongguo yuqi quanji, op. cit., pl 37.