A monochrome Imperial yellow porcelain dish with engraved blossoms.. Yongzheng six-character mark and of the period

A monochrome Imperial yellow porcelain dish with engraved blossoms.. Yongzheng six-character mark and of the period 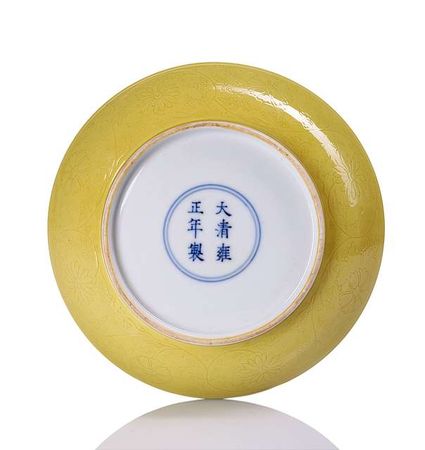 Of saucer shape with nearly straight foot, the dish is plain on the inside and engraved on the outside with a continuous lotus scroll with eight stylized blooms, depicted in two different styles, and covered overall with a bright yellow glaze, except for the inside of the foot and the base, where a six-character Yongzheng reign mark is inscribed in underglaze blue in a double ring under a transparent glaze. This so-called 'imperial' yellow was used for monochrome dishes and bowls from the early Ming period onwards, but Ming examples are generally without incised decoration.

A pair of Yongzheng dishes of this design and size is illustrated in Ireneus László Legeza, A Descriptive and Illustrated Catalogue of the Malcolm Macdonald Collection of Chinese Ceramics, London, 1972, pl.100, nos 271 and 272