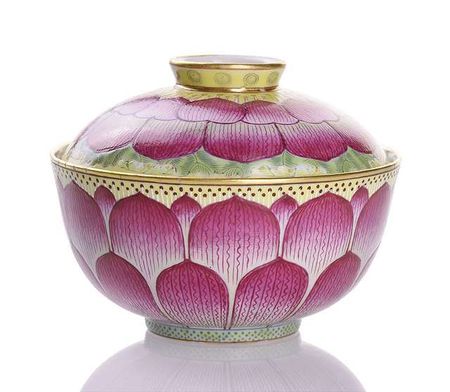 The bowl has steep rounded sides and shallow footring. The domed cover fits over the rim and rises in three low tiers to a smaller dome supporting the spherical knob. The bowl is decorated with three overlapping rows of twelve lotus petals, shaded in pink with straight and wavy veins in darker pink, the tips of the upper row of petals showing below a narrow band of stamens with white stems and brown heads on a lemon-yellow ground. The gilt knob of the cover rests on a lemon-yellow seed-pod. The six character seal mark Da qing Daoguang nian zhi is written in underglaze-blue on the base. Estimate 12 000 €

The design is directly copied from a Kangxi covered bowl in painted enamel on metal, made in the Beijing workshops. The petals of the enamel bowl are however in relief and the outer petals on the cover are upright, with the leaf folding over the bases of the petals.