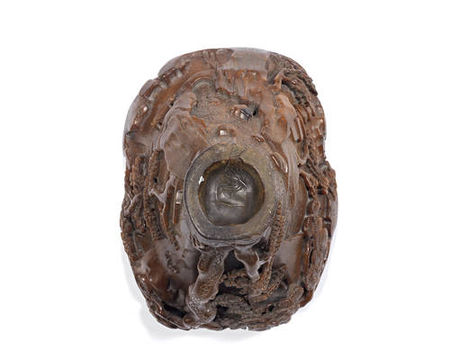 Intricately carved around the exterior with a continuous riverscape, containing a single standing scholar amidst large rocky outcrops, overhanging pine and wutong trees, the openwork handle in the form of further gnarled pine and wutong trunks reaching over the rim, the horn of an attractive honey-brown tone.

Provenance: James Whitbread Lee Glaisher (1848-1928), the prolific English mathematician and lecturer at Cambridge University. He bequeathed his extensive collection of Far Eastern, Islamic, English and Continental pottery to the Fitzwilliam Museum in Cambridge in 1928.
An English private collection Rhinoceros horn carvings were already very well-established and sought after by the early Qing Dynasty. We know that in the mid-Kangxi period, a skilled carver from Wuxi, known as Rhinoceros Cup You, was summoned to work for the Court. Furthermore, we know that three rhinoceros horn libation cups from the Sloane Collection and now in the British Museum, London, were acquired in Europe prior to 1683. This illustrates that by the late 17th century fine examples of rhinoceros horn were not only highly sought after, but were also available to foreign buyers.

Rhinoceros horn libation cups depicting single, or groups of scholars, within idealised landscapes clearly take their inspiration from painted handscrolls. The form of the libation cup, swirling waters and open-work pine handle are very comparable to another Kangxi period libation cup, formerly in the Thomas Fok collection, inscribed Sheng Fugong (reputed to be a late Ming period carver) and Wenshu cang (The collection of Wenshu), illustrated by T.Fok, Connoisseurship of Rhinoceros Horn Carving in China, Hong Kong, 1999, fig.160. It was subsequently sold at Christie's Hong Kong, 31 May 2010, lot 1808. The incisions in the horn to depict the swirling waters are also comparable to another landscape libation cup, similarly depicting a single scholar, in the Avery Brundage Collection in the Asian Art Museum of San Francisco, illustrated by J.Chapman, The Art of Rhinoceros Horn Carving in China, London, 1999, fig.275. See also a related Kangxi period rhinoceros horn libation cup from the Alphonse Servais Collection sold at Christie's London, 9 November 2010, lot 54. The surface with an attractive lustrous patination, a small mythical toad inside the rim at the back, the handle formed as a double trunk of leafy peach tree issuing long flowering and fruiting branches along the sides, a plum blossom branch at the front with a bird perched in it and another bird flying above it, wood stand. (2).

Note: The plum blossom symbolises winter and long life, and the peach is also a well-known symbol of longevity in Chinese mythology, whilst the pair of birds carries a related suggestion of union and fertility. The mythical toad on the inside of the present cup is a more unusual subject matter for rhinoceros horn carving but is nevertheless a familiar representative of the desire for wealth through its association with the Immortal Liu Hai. For an illustrated discussion on the carving of prunus and peach on rhinoceros horn, see J.Chapman, The Art of Rhinoceros Horn Carving in China, London, 1999, pp.169-174. Unusually carved in the shape of an archaic bronze libation vessel, the exterior with shallow-relief pad-feet dragons grouped in three pairs on leiwen grounds, the surface darkly patinated.

Note: For a related rhinoceros horn cup carved in imitation of Shang and Zhou Dynasty wine vessels, jue, also decorated with a leiwen ground and attributed to the mid Qing Dynasty, see The Complete Collection of Treasures of the Palace Museum: Bamboo, Wood, Ivory, and Rhinoceros Horn Carvings, Beijing, 2001, pl.205; another example attributed to the late 17th century, is illustrated by T.Fok in Connoissuership of Rhinoceros Horn Carving in China, Hong Kong, 1999, no.8. 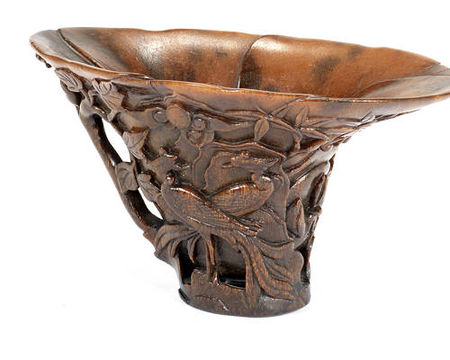 Crisply carved in high relief around the exterior with numerous birds including pairs of phoenix, cranes and mandarin ducks in a grove of bamboo and flowering prunus with twin leafy trunks forming the handle, wood stand.

Pairs of birds have an obvious connection with wishes for fertility as well as for happiness in marriage, which is the particular symbolism of the pair of mandarin ducks. Related cups with cranes and phoenix from the Chester Beatty Library, Dublin, are illustrated by J.Chapman, The Art of Rhinoceros Horn Carving in China, London, 1999, p.187. Unusually carved as an essentially plain tapering part of the horn issuing from a band of stylised petal and floral motifs carved in rounded relief around the mouth of the cup, the surface attractively patinated to a lustre.

Note: The subtle carving of the present lot emphasises the natural configuration of the fibres while preserving the original shape of the horn. A related example of this simple style of carving but with flame motifs is illustrated by T.Fok, Connoisseurship of Rhinoceros Horn Carving in China, Hong Kong, 1999, no.90. Another example was sold at Christie's London, 10 May 2011, lot 15. 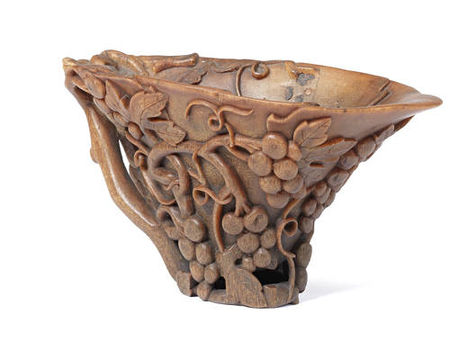 Superbly carved in relief with a meandering gnarled leafy grapevine bearing fruit and interspersed with two tree shrews on the exterior and one clambering over the rim to the interior formed of overlapping lotus petals, the horn of dark honey tone.

The imagery on this cup speaks of fertility and enduring family lineage; tree shrews or squirrels were renowned for their large litters, and here they are combined with plentiful seedy grapes sprouting from a strong, sturdy vine. A related libation cup also with squirrels and grapes and dated to the 17th century is illustrated by T.Fok, Connoisseurship of Rhinoceros Horn Carving in China, Hong Kong, 1999, no.171. Another example was sold at Christie's New York, 15-16 September 2011, lot 1227. Of lobed oval shallow form, carved around the body with a band of crisp shallow-relief taotie masks, the plain loop handle surrounded by four small coiling dragons clambering over the rim.

Provenance: acquired in China in the late 19th century
Given to the mother-in-law of the present owner
A Scottish private collection

This elegant cup derives from an archaic bronze form, and this archaisim is echoed in the taotie masks and leiwen border. An early example of this type of cup from the 16th century is illustrated by T.Fok, Connoisseurship of Rhinoceros Horn Carving in China, Hong Kong, 1999, no.2. 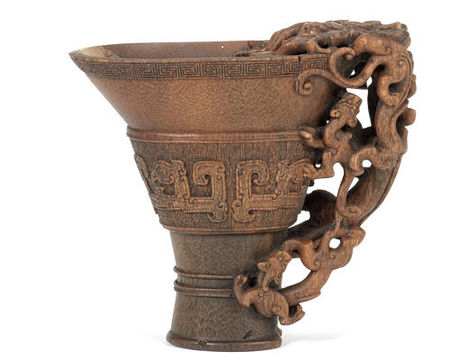 The tapering horn carved in high relief with an adult chilong and six young forming the handle and sinuously clambering over the side onto the interior, the vessel with a central register enclosing four archaistic confronted phoenix reserved on a leiwen ground between raised bands, all between the rim with a key-fret border and the foot with four bow-string bands, the horn of rich honey-brown tone.

The archaic inspiration for this libation cup is emphasised by the stylised phoenix and leiwen ground of the decorative  bands, contrasting with the lively chilong entwining to form the handle. Chilong handles are particularly common on libation cups, often clambering and twisting in large groups to make counting them difficult; more exceptionally they are found carved in the interior of the cup also, as in the present piece. Chilong
such as these allow the carver to exhibit his own extraordinary skill and craftsmanship. Other examples of rhinoceros horns carved with this combination of archaistic motifs are discussed and illustrated by J.Chapman, The Art of Rhinoceros Horn Carving in China, London, 1999, pp.147-155. A related cup from the 17th century is illustrated by T.Fok, Connoisseurship of Rhinoceros Horn Carving in China, Hong Kong, 1999, no.25. A further example, dated to the Qianlong period, was sold at Christie's Hong Kong, 27 May 2008, lot 1719. The deeply-hollowed cup formed as an open magnolia flower and carved in high relief on the exterior with smaller blossoms all issuing from a delicate leafy branch encircling the cup to form the base.

In China, the magnolia is a symbol of feminine beauty and charm, and is a popular subject for rhinoceros horn as its trumpet-shaped flowers lend themselves to the restrictions of the natural shape of the horn. A related cup from the Chester Beatty Library, Dublin, is illustrated by J.Chapman, The Art of Rhinoceros Horn Carving in China, London, 1999, pp.166-167. An earlier example of this form of cup also carved with magnolia blossom but dated to the Ming Dynasty sold at Christie's New York, 25 March 2010, lot 2391. Carved as an upright magnolia flower with two leaves and a budding branch in high relief issuing from the stalk base. The exterior with eight similarly carved panels containing a flower head curving downwards amid stylised leaves, the shoulder with four-petalled flowers and the foot with a narrow band of leafy scroll.