The Sun-Drop was unveiled to the world at London's Natural History Museum where it was exhibited in the famous 'Vault Gallery' from February through August 2011. The world's press along with guests including Jerry Hall, pictured left, were thrilled to view such a rare and beautiful diamond. Historically significant with regard to its size and colour,

Alan Hart, head of collections for the Mineralogy Department, was delighted to display such a stone. "When you look at a diamond like this", he stated in the Museum's press release, "you are not only looking at a unique piece of art, you are looking at the fascinating science that brought this stone to us. The Sun-Drop diamond was formed deep within the Earth's crust 1-3 billion years ago. As it grew, it incorporated nitrogen into its carbon crystal structure. It is these nitrogen impurities that give the diamond its yellow colour as they modify light, absorbing the blue part of the visible spectrum. The diamond then travelled on a long journey upwards in a slushy rock magma. After it was found within a kimberlite pipe (a type of volcanic rock), it was expertly studied and cut, bringing the diamond to life."

The below is an excerpt from the GIA Monograph - The Sun-Drop Diamond - 2011, Gemological Institute of America, Inc.

The mystique of yellow diamonds is nothing new. They have long been recognized and prized among collectors. In 1676, French traveler and gem dealer Jean-Baptiste Tavernier mentioned seeing a large 137.27 carat yellow diamond he referred to variously as the "Florentine," the "Austrian Yellow," and the "Grand Duke of Tuscany" in descriptions of several famous diamonds he encountered during his travels in India.

For diamonds, a large crystal displaying a notable strength of color is quite a rarity. Accordingly, a sizable fashioned gem with a strong color is even more unusual given the paucity of rough material. In fact, polished diamonds over 100 carats of any color, weak or strong, are quite uncommon. Given these considerations, the impressiveness of the 110.03 carat Fancy Vivid Yellow Sun-Drop comes into sharp focus.

With its large size and strikingly rich color, the Sun-Drop possesses a commanding presence sure to capture the attention and imagination of all who view it. While gazing at such a diamond, we must wonder what its future will hold. It can surely rank already with the historic diamonds of the past, and we can only wait for the Sun-Drop's story to be revealed.

Colour Grading The Sun-Drop: for fancy-color diamonds, color far outweighs the other "Cs" (clarity, cut, and carat weight) when establishing value. Therefore, it is critical to understand color appearances and how they affect color grades and descriptions.

Accurately describing color in diamonds is no simple task, given the wide range of possible hues. Furthermore, variations in brilliance and bright-dark contrast patterns also complicate the assessment. In 1995, GIA refined its color grading system, adding grades to better define rare depths of color that were not commonly seen in years past. With the addition of Fancy Vivid, GIA was able to highlight these rare, highly saturated diamonds in all hues. Since that time, very few diamonds passing through the Lab earn this distinction. In a 1998 sampling of yellow diamonds, GIA noted that only 4% were graded Fancy Vivid, regardless of size. Similarly, a 2003 sampling indicated that only 6% received a grade of Fancy Vivid. This already small quantity is reduced to a mere fraction as size increases. Few people will ever see such an opulent color in a diamond the size of the Sun-Drop." 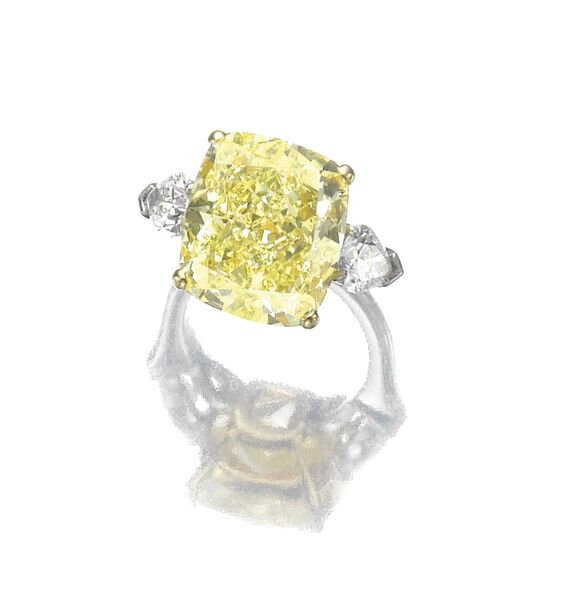 Accompanied by GIA report no. 2135050610 stating that the diamond is Fancy Intense Yellow, VS1 Clarity Accompanied by sixteen GIA reports stating that the diamonds ranging from 2.02 to 0.91 carats are Fancy Intense Yellow and Fancy Yellow, natural colour. Accompanied by GIA report no. 2125301968 and supplement stating that eight of the diamonds tested were found to be natural colour, amongst which Fancy Intense Orange and Fancy Vivid Orangy Yellow are included. Also accompanied by GIA report no. 5121301967 stating that two emeralds tested were found to have moderate clarity enhancement. Property from a royal collection. 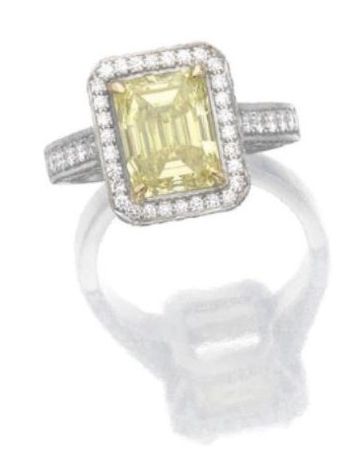 Further accompanied by GIA worksheet stating that the 3.88 carat diamond may be Potentially Flawless after repolishing. Accompanied by GIA report no. 14175772, stating that the diamond is Fancy Yellow, natural colour, VVS1 clarity. 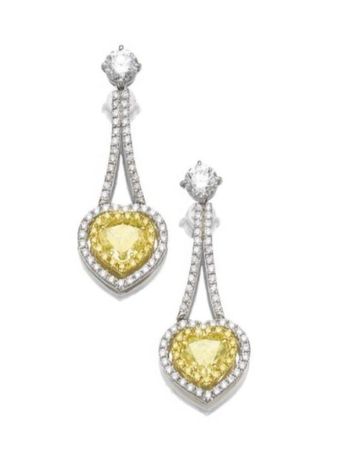 Accompanied by GIA reports no. 1112174647 and 211565006 stating that the two heart-shaped diamonds are both Fancy Vivid Yellow, natural colour, respectively SI2 and VS2 clarity.