A fine and very rare doucai 'bats' bowl. Kangxi six-character mark and of the period

A fine and very rare doucai 'bats' bowl. Kangxi six-character mark and of the period 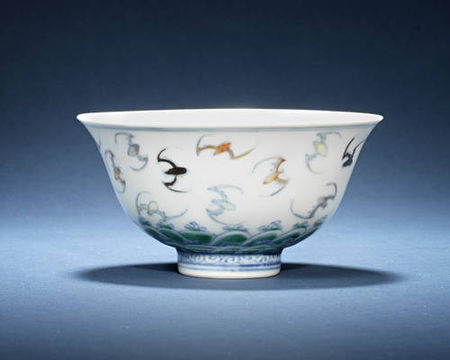 The exterior delicately outlined in blue and enamelled in translucent green, grey, red and yellow with bats in flight, above a double row of crested waves at the foot, the interior with five bats encircling a Buddhist emblem in the well. 11.5cm (4½in) diam. Sold for £157,250

Bats are a familiar rebus for blessings and good fortune in Chinese art, and bats amid clouds means more specifically 'may you have good fortune or luck'. This particular design is extremely rare. For a Yongzheng mark and period examples see a blue and white 'bats' bowl and a doucai 'bats' bowl, in the Nanjing Museum and illustrated in Treasures in the Royalty: The Official Kiln Porcelain of the Chinese Qing Dynasty, Shanghai, 2003, Catalogues pp.164-165. For a Qianlong-marked covered jar with a similar bat motif from the Tsui Art Foundation see the exhibition Joined Colors: Decoration and Meaning in Chinese Porcelain, Washington D.C., 1993, Catalogue no.71. A pair of similar Yongzheng mark and period bowls was sold at Christie's Hong Kong, 1 June 2011, lot 3525.