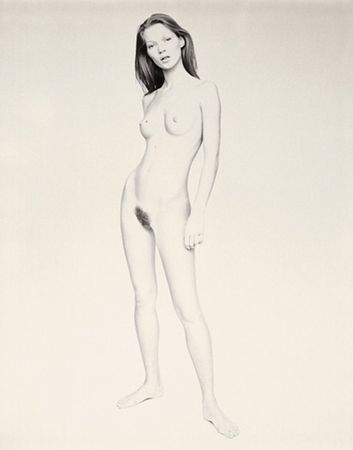 BERLIN. CAMERA WORK is pleased to present a double exhibition with photographs by Paolo Roversi and Jean-Baptiste Huynh. The exhibition will open on November 26 and will show new photographs from the series »Nudi« by Paolo Roversi for the first time as well as the photo series »Monochrome« by Jean-Baptiste Huynh, which has never been shown before. Even though the series differ in their motives, they are even more connected with the subtle use of impressive illumination, a stylistic device, which is characteristic for both artists.

The photographs of the series »Monochrome«, created by Jean-Baptise Huynh in 2010/11, are characterized by the strict and uncompromising reduction to the colour black. A spare but elaborate lighting supports this feature, so that the black objects and portraits appear in their deepest shades. The dominant black impressively embraces the colour meaning of sublime elegance and mysteriousness, as well as the complaining subtlety and elusiveness, which imposingly unfold in the photographs – a delightful interaction, encouraged by the compositional clearness, so that the recipient can experience the creation and its distinctiveness of the colour black.

Jean-Baptise Huynh was born in France, as a son of a French mother and a Vietnamese father in 1966. So far, nine publications of his extensive photographic work of landscapes, portraits, nudes and still life have been released, all in sophisticated and high-quality design. Moreover, his photographs have been presented in numerous exhibitions, e.g. in the Moscow House of Photography and the European House of Photography in Paris. In 2012, photographs by Jean-Baptiste Huynh will be shown in the Louvre in Paris.

For more than 25 years, the nude series by Paolo Roversi called »Nudi« is one of the most inspiring and aesthetic nude series in contemporary photography. A plain composition and a gentle use of light make the presented women appear like gracile painted nude studies. So, the viewer’s attention is directed to the shape and the pettiness of the female body. Next to photographs of Kate Moss, Tatjana Patitz and Guinevere van Seenus, the exhibition also includes nudes of models like Laetitia Casta, as well as lately produced male »Nudi«-photographs for the first time.

Paolo Roversi was born in Italy in 1947 but has been living and working in Paris for more than 37 years. His photographs have been published in several monographs and also in plenty magazines like Harper’s Bazaar, Interview, Marie Claire, Vogue and the New York Times. The photographic Œvre of Paolo Roversi is affected by the continuous aura of grace and fragility, but also of mystery and aloofness – a result of Roversi’s virtuosic handling of »painting with light.«