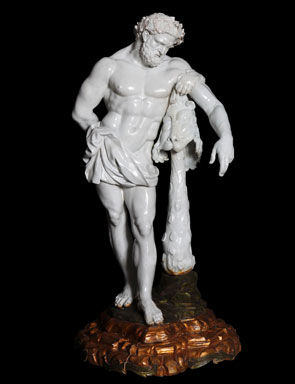 The stunning figure of Hercules is based on the famous Antique sculpture of the Farnese Hercules, now in the Archaeological Museum in Naples

FLORENCE.- A very rare and important 82cm high porcelain figure of Hercules created at the Doccia factory in Tuscany in 1753-55 sold for £657,250 last week in Bonhams Fine European Ceramics auction, setting a new world record pirce for Doccia porcelain at auction. It was the first time that a Doccia figure of this size had come to auction and the piece far exceeded its pre-sale estimate of £300,000-500,000.

Nette Megens, Bonhams European Ceramics Specialist, comments, “It was a great joy to have such a masterpiece in our sale, its price set a new benchmark for the fast expanding market for Doccia porcelain. Other figures of this importance are kept in museums around the world, so to be able to offer a previously unknown figure from a private collection was a huge thrill. It received the attention it deserved, and we are delighted with its sale.”

The stunning figure of Hercules is based on the famous Antique sculpture of the Farnese Hercules, now in the Archaeological Museum in Naples. The gesso model used in its creation has not moved since the 18th century, and is still kept in the Doccia factory museum. The Doccia factory was founded in the middle of the 18th century by Carlo Ginori, and is still operating in Sesto Fiorentino, just outside of Florence. The factory started making large-scale porcelain figures, a hugely ambitions task, in the late 1740s. A second highlight from the sale was an immensely rare and important garniture of five Meissen Augustus Rex vases which sold for £541,250. This is an extraordinary five-vase garniture (set), comprising a central ovoid vase and cover, two smaller ovoid vases and covers and two bottle vases. It is likely that the five were originally part of a garniture of seven vases, and the fact that these five have stayed together since the 18th century is exceptional. They were created for the use of the Elector of Saxony and King of Poland, Augustus III, and are marked with the AR monogram (for Augustus Rex). The Meissen factory was owned by Augustus and in the late 1720s and early 1730s produced huge quantities of porcelain for an elaborate porcelain palace on the banks of the Elbe River in Dresden, known as the Japanese Palace. This ambitious project was
never completed, and some of the pieces produced for the palace were later removed for the use of Count Brühl, the powerful Prime Minister of Saxony. These vases remained in Count Brühl’s family until they were sold at auction in 1926. After this they were in two distinguished private collections in Switzerland. For the last thirty years they have been on display in the Getty Museum in California. This garniture is exceptional for its highly detailed and original Oriental-style decoration, monumental impact and unbroken and impressive provenance. An important Meissen group of Colombine and Pantalone, circa 1736. Photo Bonhams 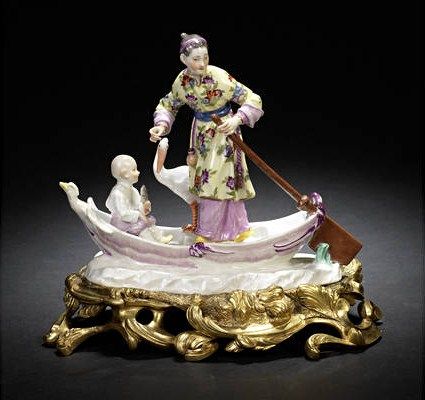 A very rare Meissen chinoiserie group on an ormolu base, circa 1750. Photo Bonhams