NEW YORK, N.Y.- Christie’s announces its upcoming auctions of Old Master Paintings and Old Master Drawings on January 25-26, 2012, offering a superb selection of rarities, rediscoveries and masterpieces. The sales will be led by a graceful tondo painting of The Virgin Nursing the Christ Child by Hans Memling, one of two works by this artist remaining in private hands, and a dazzling, light-filled oil sketch of The Arrival of Henri III at the Villa Contarini (c. 1744–45) by Giovanni Battista Tiepolo, a major work made to commemorate an historic event. The sales are also distinguished by the inclusion of works by Peter Paul Rubens, Frans Hals, Thomas de Keyser, Gerrit Dou and Giuseppe Arcimboldo that are fresh to the market, having come to light again after generations or having been recently authoritatively reattributed.

Adding to the occasion, Christie’s will hold a specialized sale, The Art of France, at 2pm on January 25, focusing on French 18th century painting and including a rich selection of works by Jean-Honoré Fragonard, among others. That same afternoon, at 5pm, Christie’s will present a celebratory sale of Wines of France. Comprising 216 works, the combined Old Master Paintings and The Art of France sales are expected to achieve in excess of $60 million.

Rounding out these auctions, and offering collectors a range of prices on high-quality works, will be property from two distinguished private collections, the Collection of Robert H. Smith and the Collection of David E. Rust, to be sold in all sessions of the sales. An innovative real estate developer whose crowning achievement was the building of Crystal City in Virginia, Robert H. Smith served for ten years as president of the National Gallery of Art, Washington and assembled a truly remarkable group of Renaissance and Baroque bronzes and paintings.

David Rust, a collector, curator and connoisseur, is also remembered for his devotion to the arts and to the National Gallery in particular, where he worked for two decades as Chief Curator of European Art. Rust was, moreover, a discerning collector in his own right and his townhouse in Georgetown was home to a broad range of works of art including examples by twentieth-century British artists, bronzes by Rodin, 19th century French works, Italian and Dutch Baroque paintings and a trove of Old Master drawings, many of which he generously donated to the National Gallery. Fifteen paintings and drawing from this collection are offered in the upcoming Old Master sales.

Nicholas Hall, Joint International Head of Old Master and Early British Paintings, comments: “Demand for top-quality Old Master works continues to rise among both new and experienced collectors and art dealers, and Christie‟s is proud to meet that demand with this unusually strong selection of paintings and drawings, almost all of which are fresh to the market. We are excited to feature a series of rediscovered Dutch and Flemish masterworks of the 17th century, which underscore the continuing sense of adventure in the Old Masters field. In addition, we have responded to the revival of interest in French Rococo art with a unique sale, „The Art of France‟.”

Leading the sale is an exceptionally well-preserved roundel painting of The Virgin Nursing the Christ Child that has long been recognized as a work by Hans Memling (Seligenstadt 1430/40–1494 Bruges), the leading artist in Bruges in the last third of the 15th century (estimate: $6-8 million). This devotional work in the artist’s mature later style, remarkable for the quality of its execution, is stylistically linked to acknowledged masterpieces from the 1480s and 1490s by Memling, but unlike those paintings is one of the rare works by the artist in private hands. The Virgin and Christ Child are depicted against a gold background, recalling the traditional icons of early Christian art, and the small circular format and intimacy of the subject would suggest a domestic function for the work. Another leading work in the sale from the Collection of Robert H. Smith is The Arrival of Henri III at the Villa Contarini by Giovanni Battista Tiepolo (Venice 1696–1770 Madrid) (estimate: $4-6 million). Noble in composition, elegant in its protagonists, impressive in its display of silks and satins and overflowing with visual imagination, this painting depicts the lavish welcome accorded Henri de Valois, soon to be crowned as Henri III of France, when he came to Venice in 1574. On that same journey, Henri III stopped at the Villa Contarini, west of Venice, and around 1744, the master of the villa commissioned Tiepolo to paint frescoes commemorating the event, which today are greatly disfigured. Yet this study, by the artist known for raising the oil sketch to the status of a collectible art form, retains its sparkle and freshness of touch.
Giambattista Tiepolo (Venice 1696-1770 Madrid), The Arrival of Henry III at the Villa Contarini, oil on canvas, 28¼ x 42 in. (71.7 x 106.7 cm.). Est: $4,000,000-6,000,000. Photo: Christie's Images Ltd 2012 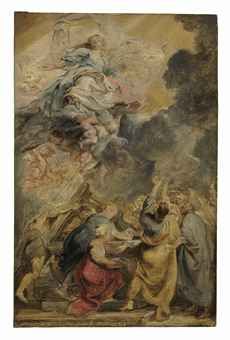 Portrait of a Man, painted in the early 1630s by Frans Hals (Antwerp 1581/85–1666 Haarlem) adds to a sale packed with stunning rediscoveries (estimate: $700,000-1,000,000). A work from The Collection of Elizabeth Taylor, most likely given to her by her father, the art dealer Francis Taylor, this lively portrait is an exciting recent addition to
the known body of paintings by the celebrated seventeenth-century Dutch master
Frans Hals. Previously thought to be by a follower of Hals, the painting was authoritatively attributed to the master himself in 2011 on the basis of first-hand examination by scholars and conservators. Formal characteristics link the work with other paintings by Hals from the early 1630s, such as those in the National Gallery, London, and the Frans Hals Museum, Haarlem. The painting, which had hung over the fireplace in Elizabeth Taylor’s Bel Air home, will be offered as a special highlight of the upcoming Old Master Paintings sales at Christie’s New York; the remainder of the film star’s fine art collection will be offered at Christie’s London on February 7 & 8.
Frans Hals (Antwerp 1581/5-1666 Haarlem), Portrait of a gentleman, half-length, in a black coat, signed in monogram 'FH' (center right), oil on canvas, 30 5/8 x 26 in. (77.7 x 66 cm.). Est: $700,000-1,000,000. Photo: Christie's Images Ltd 2012 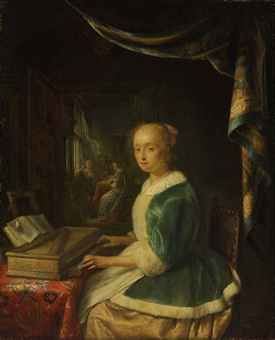 Another thrilling rediscovery is Gerrit Dou’s (Leiden 1613–1675) A young lady playing a clavichord (estimate: $1-2 million). This important example of Dou’s late work is well-documented in the literature on the artist, but its whereabouts were unknown for generations. Purchased in 1927 from Duveen Brothers by the family of the present owners, this scene of music-making in an opulent domestic setting, focused on an attractive and elegantly dressed woman, is characteristic of the lighter palette and freer technique that Dou adopted after 1660.
Gerrit Dou (Leiden 1613-1675), A young lady playing a clavichord, with signature 'GDov' (lower right), oil on panel, 15¼ x 12½ in. (39 x 32 cm.). Est: $1,000,000-2,000,000. Photo: Christie's Images Ltd 2012 An important new addition to the small corpus of accepted works by Giuseppe Arcimboldo (Milan (?) c. 1527–1593), the painting A reversible anthropomorphic portrait of a man composed of fruit is one of only three invertible portraits by the artist that are known to have survived and is quite possibly the earliest extant independent Italian still-life painting (estimate: $3-5 million). This remarkable invertible panel, perhaps painted for Emperor Rudolf II, reads in one direction as a still life of various fruits arranged in a wicker basket, but when rotated 180 degrees is suddenly transformed into a composite head of a man.
Giuseppe Arcimboldo (Milan? c. 1527-1593 Milan), A reversible anthropomorphic portrait of a man composed of fruit, oil on panel, 22 x 16 3/8 in. (55.9 x 41.6 cm.). Est: $1,000,000-2,000,000. Photo: Christie's Images Ltd 2012 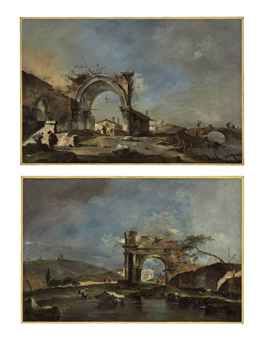