WASHINGTON (AP).- An exhibition at the National Gallery of Art will showcase its rich holdings of works on paper by the Italian baroque master Giovanni Benedetto Castiglione (1609–1664), as well as works by his contemporaries and followers. On view in the Gallery's West Building from January 29 to July 8, 2012, The Baroque Genius of Giovanni Benedetto Castiglione suggests, for the first time, the complex sources of his style such as Rembrandt van Rijn and Claude Lorrain, as well as its importance for later artists, from Giambattista Piranesi and the Tiepolo family to Antoine Watteau and François Boucher.

The exhibition includes approximately 80 works, most from the Gallery's collection; many recently acquired and never before exhibited. The last exhibition in the United States to survey Castiglione's works on paper took place at the Philadelphia Museum of Art in 1971.

"Castiglione was perhaps the most complex and far-reaching interpreter of the baroque, and we are delighted to present this novel examination of his style through the essential form of his prints and drawings," said Earl A. Powell III, director, National Gallery of Art. "At the same time, The Baroque Genius offers a striking demonstration of the breadth and depth of the Gallery's collection of old master prints and drawings."

Organized according to themes and concerns in his work—biblical processions, the memory of the antique, mythical revelry, the Flight into Egypt, mysterious burials, fantastic heads, radiant Nativities, and experimental techniques—the exhibition presents Castiglione's works and comparative examples side by side, underscoring the serial aspect of his creativity. This thematic organization makes clear his concern with continuous and creative variation on the same theme. At the same time, each section includes examples from traditions and by artists that influenced Castiglione's approach to a theme, as well as later works that were in turn inspired by him. This demonstrates the exceptional number and range of his sources, while suggesting his significance in the history of art.

Although born, trained, and active in Genoa, Castiglione worked for long periods in other Italian centers, notably Rome. His paintings were relatively few in subject but so varied that their identification can be elusive. At first combining the diverse styles in his native city, he steadily incorporated every major current of the baroque: the lyrical design fashionable in the previous century, the genre subjects of Netherlandish engravings, the exuberance of Peter Paul Rubens, the intellectual concerns of Nicolas Poussin, the sensitive observation of Rembrandt, and the visionary ecstasy of Gianlorenzo Bernini. Simultaneously repertory and individual, his style transcended all conventional categories, tremendously influencing artists in the following century—from Boucher and Jean-Honoré Fragonard to the Tiepolo family and Piranesi.

Prints and drawings were primary forms of expression for Castiglione. His passion for experiment was best served by the small scale, directness, and rapid execution of these media. For a painter of his stature they represent an unusually large part of his activity. The graphic arts were also the area of Castiglione's most remarkable creativity: his drawings with brush and oil on paper defined the possibilities of the technique, his etchings were the finest of any native Italian of the period, and his monotypes—unique images transferred from a plain surface to paper—were the first in history. 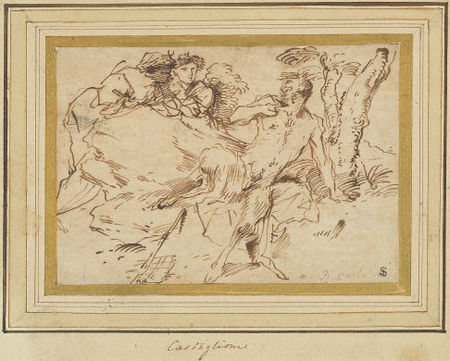