"Theater, Life, and the Afterlife: Tomb Décor of the Jin Dynasty from Shanxi" @ China Institute Gallery

"Theater, Life, and the Afterlife: Tomb Décor of the Jin Dynasty from Shanxi" @ China Institute Gallery 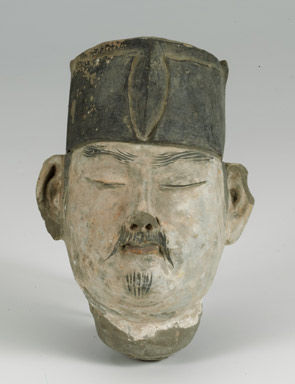 NEW YORK, NY.- A new exhibition at China Institute Gallery will explore how theater and art intersected in the realm of the Chinese afterlife. The first exhibition in the U.S. to showcase the traditional folk art of brick carving, Theater, Life, and the Afterlife: Tomb Décor of the Jin Dynasty from Shanxi will be on view from February 9 through June 17, 2012. A fully illustrated catalogue will accompany the exhibition.

Since the 1950s and as recently as a few years ago, hundreds of brick tombs from the Jin dynasty (1115-1234) have been excavated in Shanxi province, located in the north central region of China. The exhibition presents more than 80 beautifully sculpted objects revealing a passion for theater and opera in this region during the Jin dynasty. One of the highlights, a re-creation of a newly excavated tomb, will enable visitors to see how thoughtfully prepared art patrons were for the afterlife.

The ancient Chinese believed in an afterlife and imagined they would have needs similar to those they’d had in their lives on earth. Not only were the nobles buried in elaborate tombs filled with household goods, but the tomb décor in Shanxi province, like that of many tombs found in China , featured numerous references to entertainment.

Famed for their brick carving, artists in Shanxi developed sophisticated techniques, creating lively sculptural images in the grey bricks, some of them painted with vibrant colors. The most intriguing of the dozens of intricate and dramatic brick carvings found in these tombs are those depicting theatrical performances. The carvings serve as evidence of the popularity of the theater in ancient Shanxi, said to be the cradle of Chinese opera and drama, and illustrate two kinds of popular entertainment: Za Ju, formal performances of written plays; and San Qu, performances related to village festivals.

Notes Willow Weilan Hai Chang, Director, China Institute Gallery, “The role of theater was crucial to ancient Chinese life in Shanxi. Not only was it an important form of entertainment, but it enlightened people’s lives, providing a moral education. One of the most important aspects of the Chinese value system developed by Confucius is filial piety, respect for parents and ancestors, which provided many story lines in ancient theater.”

The most recent discovery of Chinese brick carvings occurred in July 2009, during the renovation of a staff residence for a chemical factory in Jishan county in Shanxi province. When construction workers hit a brick wall while digging, they called the local museum. An excavation ensued, revealing an ancient tomb from the Jin dynasty (1115-1234) decorated with magnificent painted brick carvings surrounding one raised coffin bed that contained a couple of skeletons. Assembled for the first time above ground, the reconstructed tomb presented in Theater, Life, and the Afterlife will include 43 of these carved bricks. Adorned with floral motifs, strongman guardians, and the faces and figures of auspicious animals – all carved in brick and painted with colored pigments – the tomb is considered a treasured gem of ancient Chinese art.

Among the performances depicted by carvings is the story of the Eight Immortals, who were considered to be actual people with special capabilities not unlike today’s superheroes. These seven men and one woman were the subjects of countless theatrical performances, stories, and poems.

Considered one of the most famous of the eight, Lü Dongbin, an actual historical figure, was a well-known Taoist master at the end of the Tang dynasty. Worshipped as a deity, he appears in many legends. Lü was said to have had a youthful look when he was more than a hundred years old – and had such a quick pace that he could travel hundreds of Chinese miles (known as li, about 1,640 feet) in a single moment.

Tieguai Li, another of the eight, represents the most dramatic story of reaching immortality: his body was accidentally cremated when it was still in spiritual transience. Thus, Li had to inhabit the body of a homeless man who had just died of starvation. Fortunately, Laozi, the founder of Taoism, provided him with magical medicines, and he was able to care not only for himself but also for the poor, traveling to help them with a gourd full of medicine on his back.

Another fascinating story told by the bricks concerns Meng Zong who was worried about his ill mother who craved bamboo shoots in winter. Meng wandered the bamboo forest, discouraged by the impossibility of the request. However, filial piety moved heaven and earth, and bamboo shoots miraculously emerged from a crack in the ground. Meng brought them home and cooked them in a soup for his mother, who subsequently recovered from her illness. 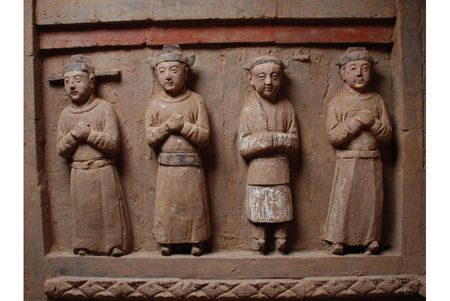