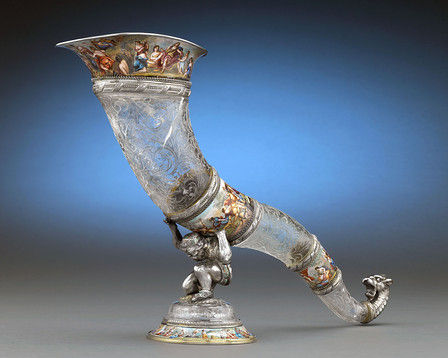 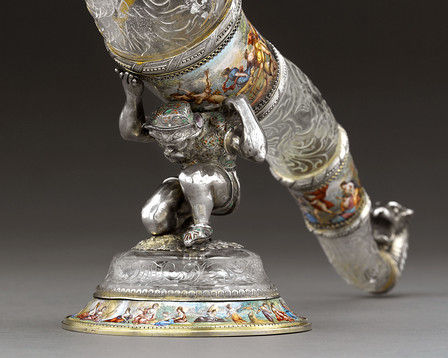 This opulent Viennese rock crystal cornucopia is attributed to the Austrian master craftsman Hermann Ratzersdorfer. Inspired by the antiquities of the Renaissance, this artisan utilized his gifts as a goldsmith, enamelist, jeweler and sculptor to craft some of the most astounding rock crystal masterpieces the world had ever seen. This cornucopia boasts radiant rock crystal engraving, classically inspired enameled scenes of the utmost intricacy, and beautiful silver work.

Rock crystal, or pure quartz, has been lauded for centuries for its inherent beauty. Ancient Roman, Pliny the Elder, found its clarity so impressive that he proclaimed it was ice that had hardened permanently over millenia. When carved, rock crystal appears far more lustrous than man-made crystal or glass, so much so that it has even been used in place of diamonds. Its brilliance and purity, combined with its relative scarcity, secured rock crystal's status as one of the most highly valued minerals throughout history. It was particularly prized during the 18th and 19th centuries, when it was considered one of the most precious and expensive materials used in the decorative arts.

A virtuoso of the Renaissance Revival style, Hermann Ratzersdorfer bears the distinction of being one of a handful of Viennese journeymen to reach the rank of master craftsman at a time when the guilds kept the number of masters as low as possible to ensure only the finest artisans thrived. With that accomplishment under his belt, Ratzersdorfer was free to open his own workshop in 1843. He soon began participating in various exhibitions throughout Europe, winning honors and medals and attaining considerable acclaim for his rock crystal objets d'art.